The Admirals trailed 22-14 after one frame but one defensive adjustment proved to be all they needed to turn the tide and Danville coasted after the first period.

“Their record (2-8) doesn’t show it because they have played a brutal schedule but that is a solid football team,” Danville coach Mark Peach said. “They have played Class 4A power Corbin, Pulaski County, Southwestern and North Laurel. Just a couple years ago they won eight games. We wanted to play a solid Class 5A football team to get ready for the playoffs and they gave us a good test.”

Danville played without Keelan Story (ankle), K.J. Stanfield and Caleb Burns went out in the second quarter with an ankle injury. Senior receiver Corydon Crawford battled cramps all night, and Peach said he was proud of the way his team battled through adversity.

“I couldn’t be more proud of our team tonight,” “We had to battle through injuries and then got off to a bad start. We were playing shorthanded and then had a couple more guys go down during the game. The next man stepped up for us tonight and we found a way to win.”

He was especially proud of freshman running back Demauriah Brown, who led the Admirals in rushing (88 yards on 23 attempts) and scored four touchdowns – three rushing and one receiving- after Burns went down with an ankle injury.

“He is just a special player and just a freshman,” the Danville coach said. “And what can you say about the way Brady (Morse) is playing. He hasn’t started a game in two year but he has become a leader on this football team and just keeps getting better.”

Whitley (2-8) took the early lead on a 56 yard, nine play drive that took four minutes, 22 seconds off the clock when quarterback Caden Petrey, who scored four touchdowns for the Colonels, scored on a one yard sneak.

Danvile got that score back in just 41 seconds, though. Burns raced around right end for 33 yards and Morse found Crawford open in the end for a 24 yard touchdown on the next play. Keegyn Wilcher’s PAT gave the Ads a 7-6 lead.

Whitley, however, scored again on a 25 yard pass from Petrey to Mason Crowley and Petrey ran in the two-point conversion for a 14-7 lead.

Not to be outdone, Brown scored from 33 yards on the first play following the score to knot the score at 14-14 before the Colonels would score one final time in the period on a Petrey 16 yard run and Whitley led 22-14 entering the second frame.

“Coach Shouse made some adjustments for us on the defensive side of the ball and we started to play much better starting in the second quarter,” Peach said. “They have moved the football on everybody they have played but began to shoot them in the football with high snaps and interceptions and we were able to take advantage of their mistakes.’

Danville would start to pull away with three unanswered touchdowns in the second quarter. Burns scored from 19 yards, then Brown would score twice, from 13 and seven yards, to give Danville a 34-22 lead at the half.

The two teams would score only one in the third period – Brown from two yards out — and each would add one more score in the fourth quarter during a steady rain. 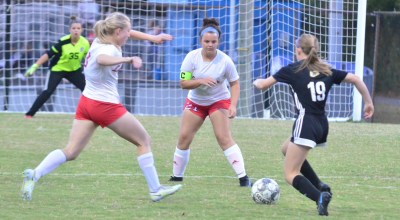