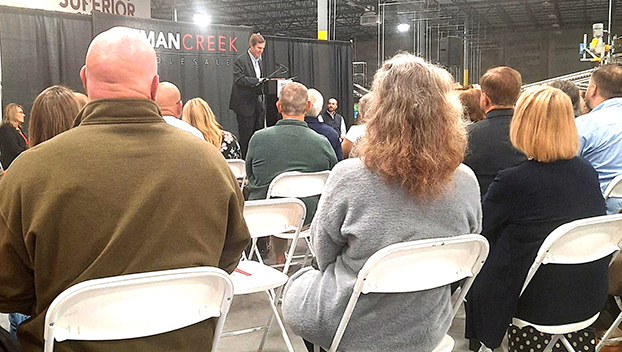 “I am glad to have the opportunity to join representatives from Pitman Creek and leaders in Stanford and throughout the region to celebrate the opening of this new facility in Lincoln County,” Beshear said. “Our state’s distribution and logistics sector is thriving, and companies like Pitman Creek are helping take the industry to the next level while creating quality job opportunities for Kentuckians. I want to thank Pitman Creek’s leadership for their commitment to the commonwealth, and I look forward to seeing the company’s continued growth.”

The new 205,000-square-foot operation came online in late September following 11 months of construction, and has added 60 full-time employees, bringing total employment at the relocated facility to 160 Kentucky residents. The investment also includes the cost of new distribution equipment, conveyor systems and office equipment. New jobs created through the project include management, team leaders and production roles. Previously based in nearby Danville, the company will maintain a distribution presence in Boyle County.

“This facility brings Pitman Creek full circle to our beginning. After the purchase in 1993 we started in Stanford with a 2,500-square-foot rented space and now have the largest, most modern facility among all distributors in our industry,” said James Coffey, president and owner of Pitman Creek. “Our Kentucky employees are the best in our industry and now they have a facility to match.”

Established in Somerset in 1978, Pitman Creek began as a custom fishing lure manufacturer and has grown to become a full-line tackle distributor for over 5,000 retail stores across the U.S. and 10 other countries. The company specializes in the bass fishing market, with over 30,000 products from more than 280 vendors.

“On behalf of Lincoln County Fiscal Court and our citizens, I thank James Coffey for having faith and investing heavily in our county,” Adams said. “I also want to thank the Pitman Creek crew for their determination to build on James Coffey’s dream of being one of the top-tier suppliers of sports equipment. I look forward to a bright and successful future for all involved.”

“The mayor, city council and all the citizens of Stanford are pleased that Pitman Creek chose Stanford for its new headquarters and operation center,” Mayor Miller said. “The additional jobs added within our city and county will allow more quality time at home with their children and their spouses instead of commuting every day.”

“Pitman Creek Wholesale has established roots in Lincoln County, and we are proud to welcome their operations back home,” Leamon said. “It has been a pleasure to work with James Coffey and his team from the initial property search to the completion of the new facility. Lincoln County is a great place to do business and we stand ready to assist any size business and industry in becoming a member of our strong business community.”

Pitman Creek’s investment and planned job creation furthers recent economic momentum in the commonwealth, as the state builds back stronger following the effects of the pandemic.

This year, the commonwealth has shattered every economic development record in the books for yearly investment totals. Year-to-date, private-sector new-location and expansion announcements include over $8.85 billion in total planned investment and commitments to create 12,500 full-time jobs across the coming years. Through September, Kentucky’s average incentivized hourly wage is $24.15 before benefits, a 10% increase over the previous year.

In July, thanks to strong fiscal management by the Beshear administration, the state budget office reported the commonwealth ended the 2021 fiscal year with a general fund surplus of over $1.1 billion — the highest ever in the commonwealth — and a 10.9% increase in general fund receipts to $12.8 billion.

In May, Moody’s Analytics published a positive economic outlook for Kentucky, noting mass vaccination as the driving force behind a sustained recovery in consumer services. The state’s recovery, Moody’s said, benefited from earlier reopening efforts and increased demand for manufactured goods over services. The report also found Kentucky’s manufacturing industry outperformed the nation’s since the national downturn last year.

Fitch Ratings in May improved the state’s financial outlook to stable, reflecting the commonwealth’s solid economic recovery. The state’s April sales tax receipts set an all-time monthly record at $486.5 million, as did vehicle usage tax receipts at over $64 million.

In March, Site Selection magazine’s annual Governor’s Cup rankings for 2020 positioned Kentucky atop the South Central region, and third nationally, for qualifying projects per capita. The commonwealth also placed seventh overall in total projects, the highest of any state with a population under five million. Site Selection also recently placed Kentucky in a tie for fifth in its 2021 Prosperity Cup rankings, positioning the state among the national leaders for business climate.

To encourage investment and job growth in the community, the state and Pitman Creek previously reached performance-based tax incentive agreements based on the company’s investment, job and wage targets.

By meeting its annual targets over the agreement term, the company can be eligible to keep a portion of the new tax revenue it generates. The company may claim eligible incentives against its income tax liability and/or wage assessments.

In 2011, Pitman Creek was approved for a tax credit of $3,500 through the Kentucky Small Business Tax Credit (KSBTC) program for creation of at least one job and purchase of at least $5,000 in qualifying equipment and technology. Since 2011, KSBTC helped small businesses create nearly 3,200 jobs and invest over $32 million across 72 Kentucky counties.

A detailed community profile for Lincoln County can be viewed here.

More information on the Governor’s AgriTech Initiative is available at AgriTech.ky.gov.

Information on Kentucky’s economic development efforts and programs is available at CED.ky.gov. Fans of the Cabinet for Economic Development can also join the discussion at facebook.com/CEDkygov, on Twitter @CEDkygov, Instagram @CEDkygov and LinkedIn.

Read about other key updates, actions and information from Gov. Beshear and his administration at governor.ky.gov, kycovid19.ky.gov and the Governor’s official social media accounts Facebook, Twitter and YouTube.