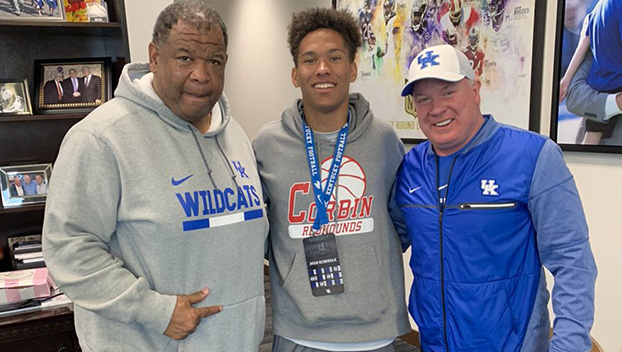 Treyveon Longmire is still considering an early graduation so he can enroll at Kentucky in January and join coach Mark Stoops and recruiting coordinator Vince Marrow.

Corbin senior receiver/defensive back Treyveon Longmire has been able to enjoy Corbin’s unbeaten regular season even more because he made his college commitment to Kentucky before the season started.

“The thing I constantly talk to him about is not listening to the outside noise,” Corbin coach Tom Greer said.

“Just focus on where your feet are today. Just have fun and enjoy this year.

“For him to already be committed to UK, that took a lot of pressure off him. We have other seniors hoping to get offers and worried about where they are going. Treyveon doesn’t have that fear.”

Longmire has game-breaking speed. He has 21 catches for 469 yards — an average of 22 yards per catch — and seven scores. He can also be a lockdown defensive back when needed in that role.

“Treyveon is a very happy, go-lucky kid. He’s always smiling. The good Lord blessed him with a lot of ability,” Greer said. “He worked really hard this winter in the weight room. He put on weight to get up to about 180 (pounds). He can still run just as fast and get down the field in a hurry.

“One thing I have noticed is that teams don’t throw his way a lot when he’s at cornerback and I understand why.”

Greer believes Longmire could play receiver, cornerback or strong safety in college. He could also be a kick returner.

Corbin starts the Class 4A playoffs this week by hosting Wayne County, a team it beat 42-0 on Oct. 22. Greer says there has been “some talk” about Longmire graduating early and enrolling at UK in January.

“I know the coaches at UK would like him to jump on board in January. It’s up to him and certainly he’ll have plenty of support if he does,” Greer said. “If he decides to stay here, he’s a track runner. But in my opinion, I think he will jump on board and get there in January if he is planning on trying to get playing time as a true freshman.”