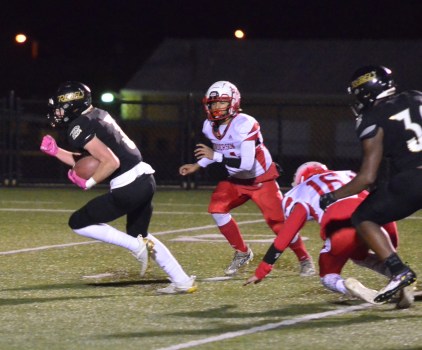 Cole Sims of Boyle County races to the end zone after recovering a fumble during the first quarter Thursday. Sims scored on a 6-yard return. - Photo by Mike Marsee 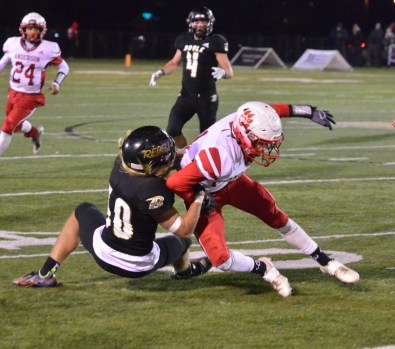 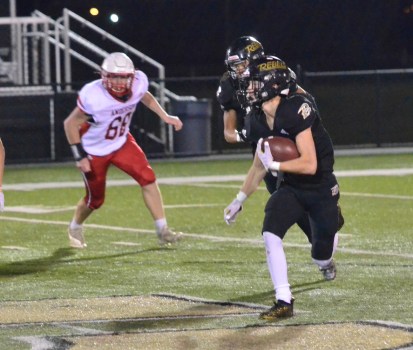 Austin Bodner of Boyle County carries the ball near midfield during the fourth quarter Thursday. - Photo by Mike Marsee 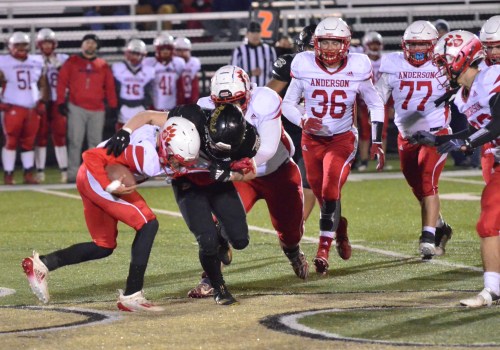 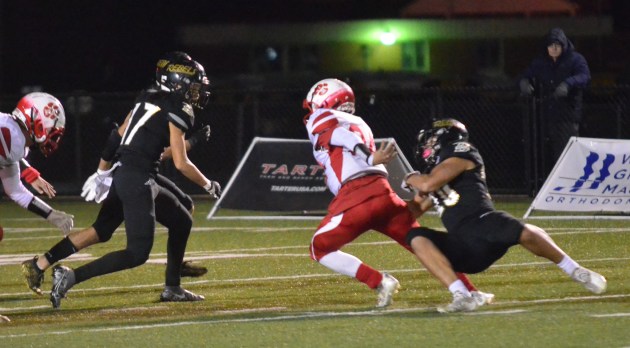 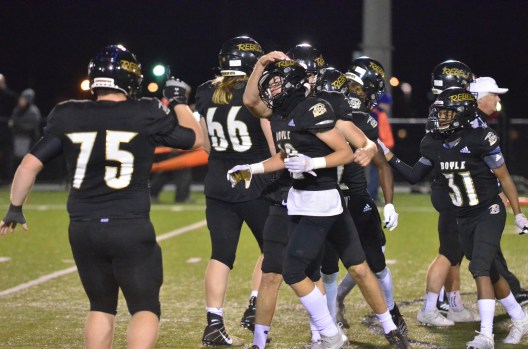 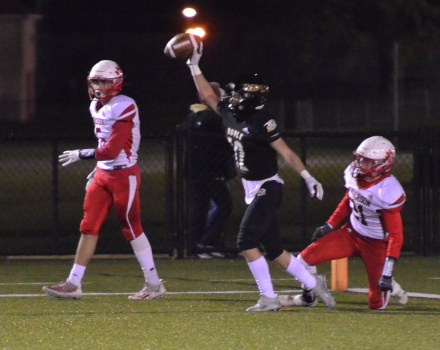 Hayden Kelley of Boyle County reacts after catching a pass in the end zone for a 26-yard touchdown during the second quarter Thursday. - Photo by Mike Marsee 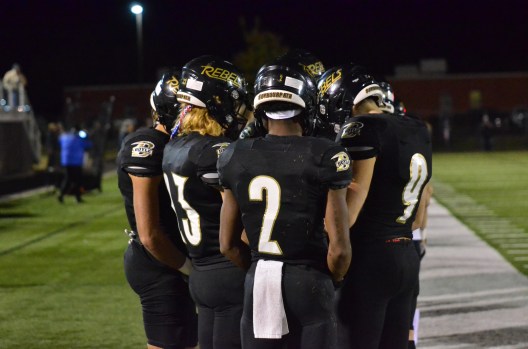 Boyle County starters who have been removed from the game, including Will Alexander (23), Sage Dawson (2) and Jagger Gillis (9) huddle on the sidelines during the third quarter Thursday. - Photo by Mike Marsee

Did you miss it?

It would have been easy to miss the decisive part of Boyle County’s playoff opener if you were, say, in line for a hot chocolate or checking your phone or just a little late getting to the game.

The knockout punch the Rebels delivered Thursday night was so swift, so absolute, that it effectively ended the game almost as soon as it had begun.

In less than three minutes — and with only one offensive snap — the Rebels reached the end zone three times and punched their ticket to the second round of the Class 4A playoffs.

They went on to score six times in the first 10 minutes and to defeat Anderson County 52-12 in a first-round game at Rebel Stadium that took just 1 hour, 39 minutes to play.

It was quick, it was easy, and it was just the way they wanted it.

“I feel like the whole team was ready to go today,” said Boyle wide receiver Hayden Kelley, who made some of the biggest plays of a 52-point first half. “We came out here and took care of business early and got off the field.”

“That’s what I challenged our team to do,” Boyle coach Justin Haddix said. “I said, ‘This is what’s supposed to happen. Let’s go make it happen.’”

Haddix and his staff were looking for the kind of focus teams don’t always have against an overmatched opponent, and he said they saw it.

“I’m very proud of our bunch for the way they played tonight,” he said. “They understand what’s at stake every week. We talk about our team’s life, and it’s on the line each week now.”

Boyle advances to a second-round game next Friday against Lexington Catholic that will decide the District 4A-5 champion.

The Rebels (10-1) could look ahead to that matchup by the 2:00 mark of the first quarter, when the clock began running continuously in what might be the shortest time it has ever taken the Rebels to trigger the mercy rule.

Here’s how Boyle eliminated Anderson in less than three minutes:

After Kelley returned the opening kickoff 57 yards to the Anderson 26-yard line, Cole Lanter took a shovel pass from Jagger Gillis around the corner and to the end zone.

The Bearcats (2-9) were backed up to their 10-yard line by two false start penalties when quarterback Eli Castle lost control of the ball, and Cole Sims grabbed it out of the air and ran it 6 yards to the end zone.

Sims sacked Castle three plays later for a safety, Gillis covered 56 yards following the free kick with three straight completions, including a 7-yard TD pass to Luke Imfeld, and Gillis capped the first-quarter scoring with a 1-yard TD pass to Keenan Stewart to make it 37-0.

Gillis went 6 for 6 for 102 yards and three touchdowns in the first quarter, and backup Sage Dawson was 2 for 3 for 29 yards and a TD in the second period.

After rushing for a season-high 279 yards a week earlier at Frederick Douglass, Boyle ran the ball only twice in the first half and seven times in all for a season-low 50 yards.

The Rebels had only 18 offensive plays.

Kelley’s plays: Kelley thought he was on his way to his second touchdown of the season on the opening kickoff, but he had to wait a few minutes longer to get to the end zone.

The senior caught a 26-yard touchdown pass from Dawson in the second quarter for one of three big plays he made in a span of about six minutes.

“I was just locked in, ready to go,” Kelley said. “Our coaches did a good job of preparing us this week, and

Kelley, who had a 90-yard kickoff return for a touchdown in a 2020 win over Madison Southern, appeared to be on his way to another special teams TD when he got open along the left side of the field before the last man on the Anderson cover team cut him off.

“I thought I had it, but I guess he had a good angle on me,” he said. “I think that (touchdown) catch made up for it.”

Kelley adjusted his route to catch the pass from Dawson in the end zone for his touchdown four plays after he intercepted a halfback pass by Anderson’s Cam Higgins and one play before he recovered a fumble to set up the Rebels’ final score.

We have liftoff: When Kelley caught his touchdown pass, he was hoisted into the air by offensive lineman Zach Mason, just as nearly every other Boyle player who has scored an offensive touchdown this season has been.

If Mason is on the field when the Rebels score — and sometimes even if he isn’t — he launches the teammate who scored into the air as part of the celebration in a move known as the “rocket ship.”

Big or small, the 280-pound Mason lifts them all. He even helped his 240-pound teammate, Tommy Ziesmer, get airborne after Ziesmer scored in the win at Henderson County.

“His head was over the goalpost,” Mason said. “It also helps when they jump. It looks a lot better.”

According to wide receiver Cole Lanter, the roots of the ritual can be traced to the days when he played alongside Mason at Woodlawn Elementary School.

“We grew up playing together. Zach and I, we’ve always been best friends. He was my first friend since I moved to Danville,” Lanter said. “At Woodlawn he picked me up a few times, and then in middle school is really when it took off.”

Lanter said Mason has lifted him after every touchdown he has scored since his seventh-grade season, except for the first score Friday, when the tables were turned.

“Tonight on the first one I picked him up for the first time,” Lanter said.

Mason played only on defense as a freshman, but when he was back on offense the following year, he reintroduced the rocket ship with Lanter and his older brother Reed, Boyle’s quarterback at the time.

“I was like, ‘You know what? I’ve played football with these guys since Woodlawn, so why not give everyone a rocket ship?’” Mason said.

Lanter said the lifts give everyone on the team a lift, and he said there’s some symbolism there as well.

“That’s what the linemen do,” he said. “The linemen are always there to pick up the skill players. They make the unseen plays, they make every play, and without them we wouldn’t be able to do anything, so them holding us up is a little way to get them in on the glory.”

Extra points: Boyle has beaten Anderson five times over the past four seasons by a combined score of 278-33. … The Rebels has 168 of their 181 yards in the first half, while the Bearcats had 76 of their 89 yards in the second half. … Trey Lanter recovered a fourth-quarter fumble that was the last of Anderson’s three turnovers.

Playoff week two: For the third consecutive season and the 14th time since 1998, Boyle and Lexington Catholic will meet in a rematch of a regular-season game with elimination on the line.
Friday’s game at Rebel Stadium comes five weeks after the Rebels defeated the Knights 16-10 on the same field.

“After we played them the first time, their coach said, ‘We’ll see you in a couple weeks,’” Haddix said.

Boyle leads the series 20-13, but none of its current players have experienced a loss to LexCath. The Rebels have won eight straight games in the series over the past five seasons.

As if the rivalry needed additional tinder, Friday’s game matches the teams ranked first and second in Class 4A in the Ratings Percentage Index used by the KHSAA.

Boyle had a season-high 467 offensive yards in its regular-season win over LexCath, but the Rebels scored only one touchdown and three field goals.

“We’ve got to finish drives when we get (into the red zone). We’ve got to execute better and do a better job of calling plays, and that’s on me,” Haddix said.

LexCath’s only losses have been to Boyle and Lexington Christian, the only team to beat Boyle this season. The Knights (9-2) advanced with a 33-19 win over Bourbon County.

“I’m sure they’re confident they can win, so it’s going to be a battle,” Haddix said.

Haddix also noted that because the Boyle-Danville series has been on hold for the past two seasons, it’s also the only rivalry game the Rebels have played since he came to Boyle.

“The only rivalry I know is Lexington Catholic,” he said. “It’s going to be a big one, and our kids will be focused and ready to go.”