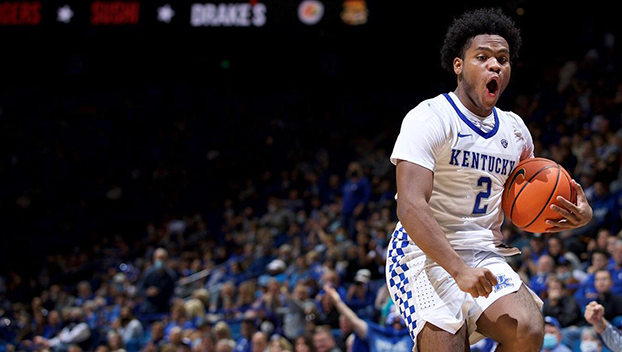 Sahvir Wheeler gave Kentucky a second-half spark in an 80-71 over Miles College in Rupp Arena on Friday. It was the second exhibition of the preseason. UK plays for keeps starting Tuesday night against Duke in Madison Square Garden. (Kentucky Today/Tammie Brown)

This one didn’t count and that was almost a good thing for Kentucky.

Less than four days before a heavyweight season opener against Duke in the Champions Classic on Tuesday night, Kentucky had to scratch and claw its way to an 80-71 win over Miles College Friday night at Rupp Arena.

In what was expected to be another easy exhibition win for the Wildcats, the final tuneup before the official season opener was more difficult than anticipated. It took a second-half comeback to avoid a possible slip-up.

“This was a great game for us, great game for us to play,” Kentucky coach John Calipari said. “The things they did perimeter-wise (helped us). I didn’t expect them to make (that) many threes (15). … It was disappointing (the number of threes they made).

“How many teams are going to come in here knowing they’ve got to make 15 threes to beat us? The good news is — we’re shooting the ball better. I told the coach, this was a good game for us, you went right at us.”

Both teams had nothing to lose, but the Golden Bears had everything to gain. The Alabama school turned a few heads, especially in the first half. Miles College enjoyed a first half to remember, even if it won’t be recorded in the official record books.

“I thought we competed well,” Miles College coach Fred Watson said. “We knew what we were up against. We didn’t think we were going to win the game on the scoreboard, but we wanted to win the game for ourselves.”

They did just that from start to finish. The Golden Bears sank 11 3-pointers in the first frame and even built a double-digit lead and led 36-26 at the five-minute mark of the first half. The guests held a 46-39 advantage at the break.

Kellan Grady did his part to keep the Wildcats from completely self-destructing with 11 points and three treys in the opening half. Sahvir Wheeler picked up where Grady left off to open the final half.

The Georgia transfer scored eight of Kentucky’s first 15 points of the second half as the Wildcats used an 11-0 run, capped by Dontaie Allen’s trey from the right corner, to regain a lead it had for just 23 seconds in the first half. Kentucky expanded the lead to 61-50 and never trailed for the remainder of the contest.

Wheeler said the Wildcats made the right adjustments on defense.

“They made shots and forced us to play pretty well in the second half in order to come out with a win,” he said.

Kentucky scored 17 of the first 19 points of the second half while hitting shots became more difficult for the Golden Bears who misfired on eight of their first nine field goals in the final half as reality began to sink in for Miles College.

“They knew we probably were good but I don’t think they thought we were going to be this good,” Miles College guard Roger Davis said.

Across the board for Miles College, it was a night to remember.

“It was a dream come true for us,” guard Brandon Miller said.

Stoops expects Wildcats to rebound in showdown against Vols