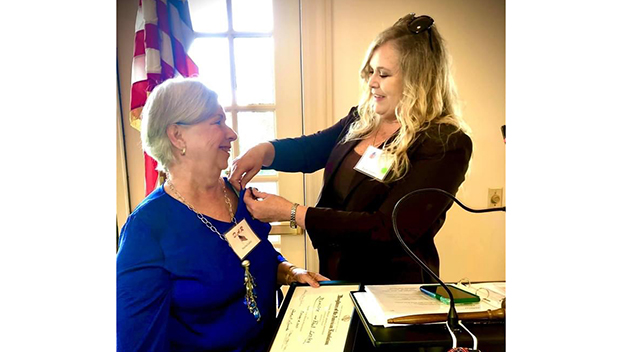 The Daughters of the American Revolution Excellence in Historic Preservation Award was presented to Marilee Lesley by St. Asaph Chapter at their October 2021 luncheon meeting at the Danville Country Club. Marilee and Paul Lesley have restored five houses in Illinois, Michigan, and Kentucky between 1974 and 2019. By learning skills and studying historic elements of different properties over the years, they have done a lot of the restoration work themselves, only hiring contractors when they had to.

The Versailles property, located at the end of a dead-end street, had undergone many updates and suffered lots of damage, including broken windows and animals living inside the house. For many years the front yard had been used by drivers as a way to exit the dead-end street. It caused quite a stir when the Lesley’s built a garage at the end of the driveway, bringing an end to the cut-through traffic. The plumbing, heating, wiring, plastering, insulation, roofing, and foundation needed to be addressed. The house needed functioning bathrooms, a modern kitchen, and rebuilt windows. Paul rebuilt all the windows himself. The raccoons living in the house didn’t give it up easily either! It took about eleven years to make the house what it is today.

It is the hands-on work that gives both Marilee and Paul a sense of accomplishment. They call it a labor of love.

The DAR Excellence in Historic Preservation Award is given to recognize volunteer efforts that preserve important historical properties at the local, state, and national levels.

Daughters of the American Revolution is a service organization with 80 chapters in Kentucky. DAR has had missions to promote historic preservation, patriotism, and education since 1890.