The sky’s the limit
As city attempts to get airport annexation off the ground, opponents share concerns 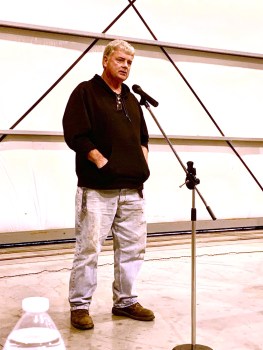 William McCormick, who owns a farm located inside the city’s annexation attempts concerning the airport area, said he is worried about eminent domain becoming a factor. - Photo by Bobbie Curd 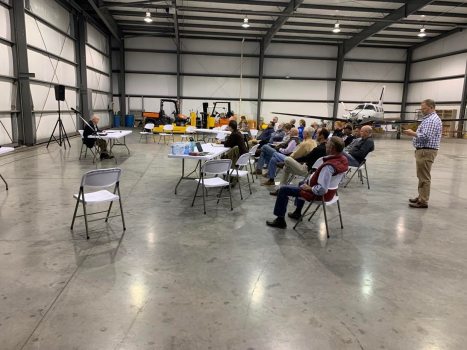 A public meeting was held Thursday inside a hanger at Stuart Powell Field. • Landowners and Danville-Boyle County Airport Board members gathered to discuss concerns over the City of Danville’s current attempts to annex close to 600 acres of land, including the grounds the airport is on. - Photo by Bobbie Curd 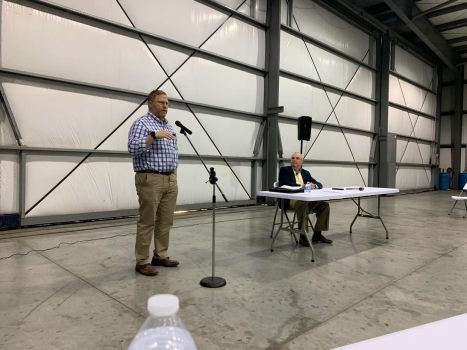 Magistrate Jason Cullen spoke during last week’s meeting held at Danville-Boyle County Airport. He said he is not against annexation, “for those who want it,” but said the property owners, including the airport board, who don’t shouldn’t be forced into it. - Photo by Bobbie Curd 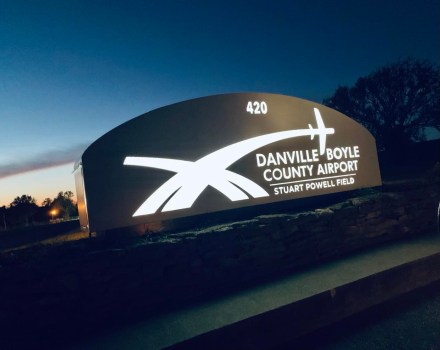 Some controversy has amped up in the community surrounding the City of Danville’s beginning attempts to annex land that’s partly home to Stuart Powell Field. If successful, this means the Danville-Boyle County Airport will be considered inside city limits, as well as four other properties in the area.

Concerns over the plan were vocalized during a public meeting held last week at the airport. Out of five property owners, two are against the annexation, including the airport board, and they shared perceptions on how they feel the city is moving forward with the plan without getting input from partners or answering questions about what it will do to taxes levied on airport users.

But the city manager says there is much misinformation circulating about what the annex will mean for the facility, and plans to have a joint workshop with the commission and airport board, as well as public forums if desired.
_ _ _

The city held and passed readings this summer of an “intent to annex” ordinance, affecting 583.7 acres between U.S. 127 and Gose Pike and to the south of Airport Road.

A property owner spoke during one of those commission meetings, asking that his family’s farm not be annexed.

Airport board members told the commission some corporate tenants may leave if it goes through. The intent passed 3-1, with Commissioner Kevin Caudill voting against it.

Caudill said the city should share more information about why the annexation was taking place, because it seemed “we really can’t give them a great reason why.”

City Attorney Stephen Dexter said the intent ordinance would “allow these conversations to transpire,” and that it’s only a starting point in what would be “a long game.”

Boyle County Fiscal Court has been quiet on the issue, but recently Magistrate Jason Cullen said that’s because “we still, technically, have not been approached” about the plan. But, he said he first heard about the intent back in 2015, and another property owner also said that’s when they were first approached about annexation by a former city manager.

Rob Caldwell, chair of the airport board, has been concerned because of the timeframe involved. Kentucky Revised Statutes says those who oppose annexation have a 60-day window to submit a petition after the ordinance’s second reading, which must include 50% of voters or real property owners in the identified area. If the petition is successful, the question could be put to a vote.

Caldwell said he became more concerned when a scheduled meeting with the city was canceled, because “they said they had just started working on the questions,” and the airport board is worried they may proceed without offering answers. He said they’ve asked how will this affect the airport with the city’s “several tiers of taxation.”

The city commission was invited to last week’s public meeting, Caldwell said, but had been instructed not to come. Part of the communication setback can be linked to the airport board previously obtaining counsel to dispute that the annexation was illegal since it contained acreage located in Lincoln County. But the city has since removed that part of land from the plan.

Caldwell said the board sent a letter from its counsel to City Attorney Stephen Dexter, “saying they gave us permission to meet candidly with the stakeholders and the city, but he firmly disagrees.”

The airport board, city and county are all considered “sponsors” of the airport, and Caldwell said that whenever a grant is applied for, “all three of them have to sign. What we’re trying to figure out is what can the city do in addition to what all of them can, together.”

Some have questioned why the city would “attempt to run” an airport, which it has no knowledge of. But the Federal Aviation Administration actually “considers it their airport inside the fence,” Caldwell said, and that the city has said they want no involvement in its operations.

During Thursday night’s meeting, held inside an airport hangar, Magistrate Cullen said he is not against annexation of those properties who wish to be. “I’m against (the city) taking property that doesn’t want to be (annexed), including this airport.” A pilot himself, he praised the airport board for its success over the years and how smoothly the operation is run.

“When the government gets involved, it tends to break things,” he said.

Cullen feels that economic development is an excuse. “I hate eminent domain,” he said, referring to the government’s right to take land for public use, with compensation for owners. His fear is that eminent domain will be one of the first effects, that the city will attempt to buy up surrounding land for future airport plans and he doesn’t think “that’s the best way to do things.”

William McCormick, who’s lived on his farm with his family for 30 years, said, “What if I don’t want to economically develop?” and said his fear is losing his farm, where he “was hoping we’d spend the rest of our lives.”

But, he said he understood why other property owners, like those who run the event venue Warrenwood Manor, want it to go through. Brittany Mills, Warrenwood’s co-owner, sent an email in her place to be read at the meeting.

She said their venue hosts 6,000 guests a year, and they would love to be able to have a liquor license in order to expand, creating more jobs and tourism. Boyle County is still dry, although Cullen said he hopes to get the question back on the ballot for the next election.

The reasons a city can annex, according to KRS, include if the area is “suitable for development for urban purposes without reasonable delay because of population density, commercial, industrial or government use of land, or subdivision of land.”

McCormack said the impression is it’s just a matter of “getting more taxes. And unless I’m mistaken, even if they do this, I still can’t vote in a Danville election. We’re not going to be represented. The folks at the airport will pay a payroll tax, I assume, and unless they live in the City of Danville, they’re not going to have a representative about how that money is spent.”

Patti Powell, an airport board member and daughter of the late Stuart Powell, said one of the claims is added fire protection, but said there is a volunteer department on the grounds. She asked Magistrate Cullen “is there not any type of interlocal agreement?” in reference to mutual aid, if needed.

“We’ve met with a lot of people and users of the airport. They’ve asked a lot of questions,” City Manager Earl Coffey said. Since the city is waiting for “some details from counsel, KLC (Kentucky League of Cities) and other sources, it was probably premature for us to sit in on that meeting and engage at this time.”

First and foremost, he said, annexation has “no impact on sponsorship or ownership — none.” Coffey said. “The county has a boundary that’s established under KRS … a constitutional boundary for representation at the state and federal level… The city and county have always worked together,” and gave the example of joint efforts between them at Millennium Park. “And in-kind services can still be given.”

He said annexations “happen for different reasons. Forty years ago, they annexed to generate revenue. But you can’t just do that now to raise revenue because the cost burden outweighs that.” Coffey used the example of an area of Stanford Road, where an intersection and a couple of hundred acres of farmland was annexed in order to clarify who responds in an emergency.

He said the biggest change will be that the “first responders for the facility will become City of Danville staff, as primary responders.” Also, with the annexation, Coffey said there are regulatory benefits and opportunities that would exist.

“It also can be shown that property values would be higher for those citizens who desire to change uses of their land, and the net annual expenses for landowners would be reduced for some.”

Coffey said the primary driver of the annexation discussion is that it can place the city “in a stronger position to help the airport board implement future planning as time passes.”

He said, “Further, and in terms of misunderstanding, annexation has nothing to do with changing ownership of private property — nothing.” The city is not proposing anything tied to the land purchasing of any property related to the annexation, he said.

Coffey said there would be a “marginal increase in property tax,” but that utility rates in the city are lower than the county, “so it usually washes each other out.”

On-air taxes do have a potential to increase for some, he said, and the city “is being very cautious about this.”

Coffey said they are “evaluating options to mitigate this impact so as to actually incentivize users of the facilities, incentivize jobs at the facility. The annexation will have a lasting impact for the community.”

He said, “It’s not about revenue, per se, in this case. We want to make sure that the City of Danville is in the position to help the airport with direct investments off-grounds, as time passes,” and that fear should not be fostered that the city simply wants to generate revenue from the airport’s users.

“The city cannot legally operate it, either. The gas tax and the money on-site at the airport property belongs to the airport board. We would rather incentivize jets rather than lose them, there’s no advantage to the city to run jets off.”

Coffey said the city has heard the concerns. He said there is a process related to the effort “which has and will continue to provide the city a chance to listen, hear and impact positively the concerns.” He said they will plan a joint workshop to talk about the financial policy with the commission and airport board, giving the opportunity for questions to be asked, as well as offer a public forum if it’s desired.

“The final action cannot be based on emotion or misinformation, but the best decision supported by facts,” Coffey said. “The goal of the city is to ensure this is positive. It is of no benefit for the city … to endorse a negative action.”