Homelessness: Admitting we have a problem 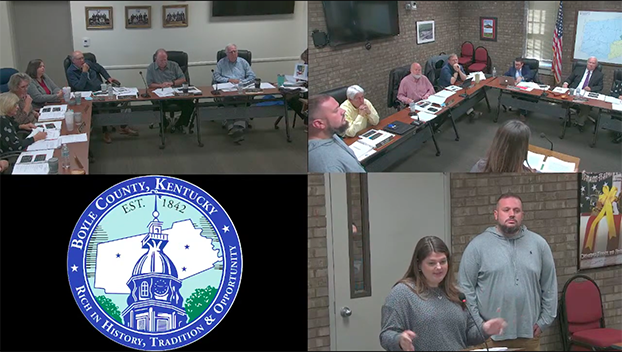 A program enacted this year by the Housing Authority of Danville has been able to secure short-term placement for several of the area’s homeless. But those involved say the number of individuals helped doesn’t show how many actually are in need of safe shelter in this community.

“The homelessness in our area is greater than anyone could have predicted, because they aren’t seen a lot,” said Michelle Marple, a social worker who coordinates family and supportive services with the Housing Authority of Danville. She said many of these displaced people are sleeping in cars at 24/7 businesses, or staying on someone’s couch.

They also talked about their group’s continuing struggle to find longer-term shelter for an increasing amount of people in need, either due to drugs, mental health issues, or domestic violence — or oftentimes, all three.

Fox said, “We’ve been having this conversation about homelessness for a while now.”

“A year and a half, plus,” Judge-Executive Howard Hunt said, who’s accompanied Fox on drives to scout out suitable housing.

Getting with the program
Tim Kitts, the housing authority’s executive director, received an Emergency Solutions Grant, which has funded vouchers for up to five-day stays at a local motel. With the grant, he created an emergency housing program as part of Families Forward — a group effort which began in January and is now a nonprofit, putting the organization in a better position to apply for future grants.

Marple told the court the program has served 71 individuals since then, providing over $10,000 in motel vouchers for 138 nights — but these numbers are only through September. That number of requests has already increased and will continue to, she said, now that colder weather is upon us.

The grant also afforded them to lease apartments used for longer stays, but that arrangement hasn’t been ideal. The program is in need of a more permanent residence with a live-in monitor, much like the women’s recovery housing through Shepherd’s House on Lebanon Road.

Fox emphasized that finding a permanent building does not mean permanent stays for those in need; they are required to get treatment and obtain employment in order to get back on their feet. When someone enters the program, an agreement is signed outlining the rules in order to stay.

They are given storage for their clothes, provided with bedding, personal hygiene items, and food, as well help getting on Medicare. It’s a structured process, which includes free training through Goodwill Employment Services, among other resources.

Fox said Shepherd’s House, an outpatient substance abuse program, has been overwhelmed by the requests for shelter.

The court was surprised to learn that 66% of those individuals served are female. Magistrate Tom Ellis said this means 2/3 of them are women, and that, “I’m embarrassed that I’m so naive about that,” he said.

Greenhouse17, an advocacy agency for domestic abuse victims, also comes every week to work with those in the program.

Magistrate Phil Sammons asked if domestic abuse is the biggest reason women are in the shelter program. Marple said, “I’ve not had a woman yet who doesn’t have a history with it.”

Fox said these are women who have been kicked out by partners, for instance, and are struggling to stay afloat. “This is what we’ve been seeing, in doing this program for almost a year now. Tim, Michelle, and Gwen (Campbell, social worker) at the Housing Authority have really worked hard on this,” Fox said.

‘Not in my backyard’
“So, how can we serve people from 30-90 days (with housing) to make an impact on their lives, where they have time to get treatment, find a job,” Fox said, but there’s no long-term housing offered locally. “Housing in Boyle County is a problem right now.”

Magistrate Ronnie Short said the church he attends also offers some short-term lodging help, which many other church groups are known to do locally.

After the meeting, Marple said the housing authority doesn’t have a complete count of the homeless. “We only know about people who apply through our program,” which she serves as the housing coordinator of.

Hunt asked Fox if any of the previous locations they scouted are still viable. Fox said yes, but there are more obstacles to consider. “If the location is close to a school, it’s not appropriate since some will have violent charges in their past.”

He also said that the thought of “not in my backyard” is a very real thing. “We’re trying to be conscious of that …” but added he feels these perceptions are changing, as seen with the women’s home. They’ve had much support by the community for the endeavor, where women who are continuing to work on sobriety live together with a house supervisor, must be employed, and attending programs.

“It shows that the community is becoming more accepting, but we really can’t wait for them to fully accept it. These people need help and it’s a lot of work,” Fox said.

Another hurdle, once they do find a job, is transportation — DanTran doesn’t drive out to the women’s home on Lebanon Road.

Julie Wagner, county administrator, said DanTran is currently taking public comment for proposed changes on its route; anyone who wants to help can go to DanTran’s website under the “about” section to offer up the location as a suggested pick-up and drop-off point.

Magistrate John Caywood said he feels drug abuse is “where everything starts, you can’t forget that, you have to have a plan of attack.”

Fox explained how treatment plans are developed, including 28-day rehab stays, depending on the situation. “We want them to get their mind right, and then we’ll discuss options when they come back. But all these women and men — where do they go after that?”

He reiterated that the aim of these programs is not to provide permanent residency. “We can have a building and provide shelter, but they have to put in the work to transition. That’s why we’re providing structure.”

The housing program leaders also plan to present to the city, and will eventually request both governments’ help with funding when they find a suitable place to buy.

At the end of their presentation, Fox added one last thought: “We have a homeless problem here. And we need to admit that.”