King could see more playing time at UK this season 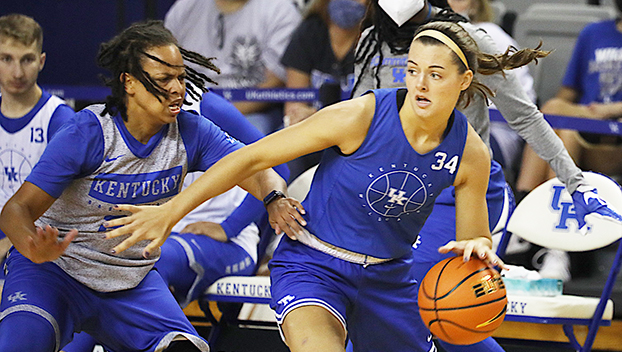 Junior Emma King is one of the players coach Kyra Elzy hopes will offset the loss of Blair Green this season.

Junior Emma King of Lincoln County has played limited minutes in 20 games during her first two seasons at Kentucky but coach Kyra Elzy says that might change, especially after the season-ending injury to Blair Green.

“She is playing with confidence. One of the things we talked about all summer is you are a shooter and you have to be able to put the ball in the basket even under pressure with the defense running out on you,” Elzy said.

She had over 2,500 points in high school along with 750 rebounds. She averaged 18.5 points per game her senior year when she hit almost 40 percent from 3-point range.

“She is so much more confident this year,” Elzy said. “Defensively she also understands positioning and is making hustle plays.”

King said UK worked a lot during the summer on posting guards inside to score because most of the guards have more size than her.

“Probably not me (posting up). I am just in the group that is getting help. I told them one time please don’t ever give me the ball in the paint if I am posting up. Just act like you don’t see me,” King laughed and said.

Elzy confirmed it was her position group working on posting up and that King just took part in the work. However, the coach’s vision for King is to sprint the floor, get open, and hit 3-point shots in transition or be a zone-buster and shoot about 40 percent from 3-point range.

“For the rest of the wings, that is our package (posting up),” Elzy said. “We just want to do a better job taking advantage of our size and posting up our other guards.”

King had five points, three assists, one steal, and three turnovers in 27 minutes in UK’s exhibition game last week. She was 1-for-3 from the field but Elzy was happy with her play.

“I think she has bought into her role. She fits the type of player that I’m looking for: heart, hustle, intensity, and is very competitive. She buys into her role and is a big piece of what we do,” the UK coach said.