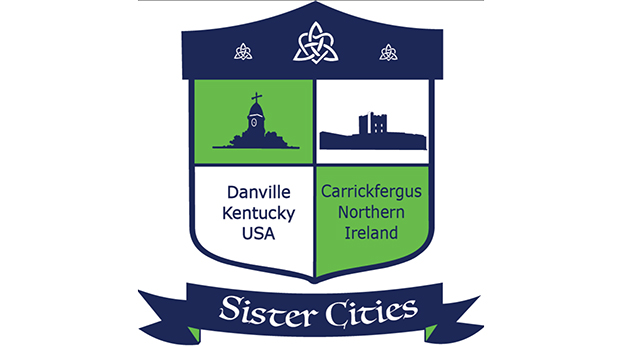 The Danville Sister Cities Commission will sponsor a high-school exchange with Carrickfergus, our Sister City in Northern Ireland, this summer. Local students who will be entering the 9th through 12th grades next fall are encouraged to apply.

Eight local students, accompanied by an adult chaperone, will fly to Ireland on July 22nd and spend a week in Carrickfergus with the families of their high-school exchange partners.  While there, they will visit the 12th-century Norman Castle on the Carrickfergus harbor, the “Titanic Experience” museum and world-famous murals in Belfast, the Giant’s Causeway on Ireland’s northern tip, and the recently opened Gobbins, “the world’s most dramatic cliff walk,” on the Irish Sea.

Before leaving with their exchange partners to fly back to Kentucky on July 30th, the students will spend a day and night in Dublin. While the Irish students are then in Danville for about a week staying with their counterparts’ families, Sister Cities will plan a welcome pot-luck dinner and some Kentucky excursions for them.

Ten members from UPLIFT, the Carrickfergus arts group that has been coming to Danville for many years, will be in Danville from mid-July offering workshops in conjunction with the West T. Hill Community Theater. Ryan Moffett, UPLIFT’s Executive Director, will coordinate the exchange from the Irish side and travel from Carrickfergus with the exchange group back to Danville on July 30th.

Students may pick up applications for the exchange as well as a “Frequently Asked Questions” sheet from City Hall or their high-school counselors.

Since 2009 when Danville was officially “twinned” with Carrickfergus, more than 300 Danvillians have traveled to Carrickfergus as part of cultural exchanges, three Sister Cities group trips, sports teams, and family visits. In 2019, after the Irish muralist Dee Craig worked with Danville students to complete his “Diversitea” mural on Elmwood Inn Fine Teas, Sister Cities International awarded Danville one of its two “Arts & Culture” national awards.

To view it, Google “Kentucky Sister Cities Facebook” then scroll down the left side to the Danville video.