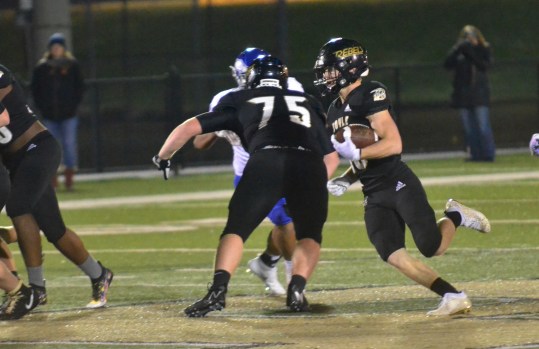 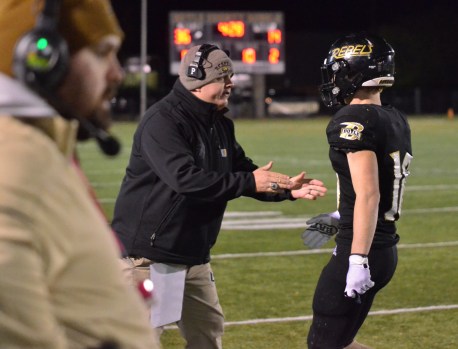 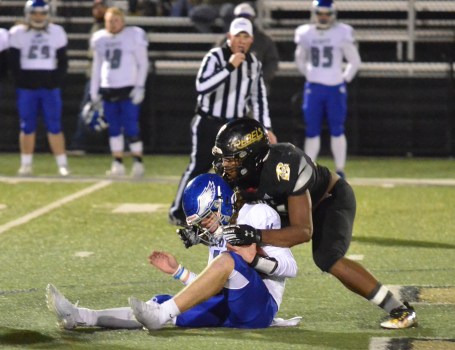 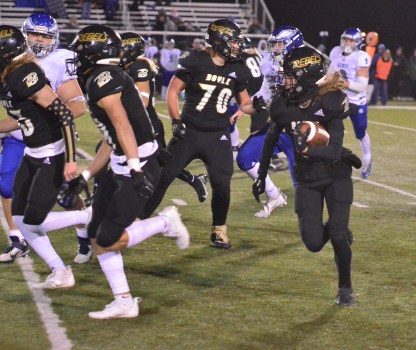 Trey Lanter of Boyle County returns an interception on the final play of the game. Lanter returned the ball 40 yards. - Photo by Mike Marsee 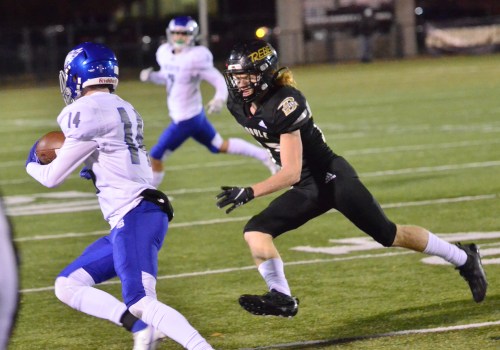 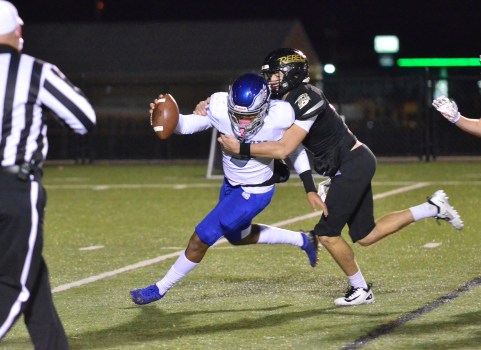 Jagger Gillis, right, of Boyle County sacks Scott quarterback Dasani Lane for a 13-yard loss during the first quarter Friday. It was one of four sacks in the first quarter for the Rebels. - Photo by Mike Marsee 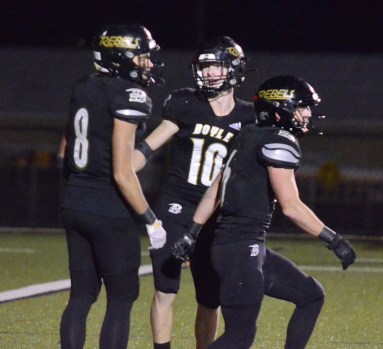 Avery Bodner (10) of Boyle County celebrates with teammates Luke Imfeld (8) and Cole Lanter after Bodner scored on a 6-yard run during the first quarter Friday. Bodner rushed for 212 yards and five touchdowns. - Photo by Mike Marsee 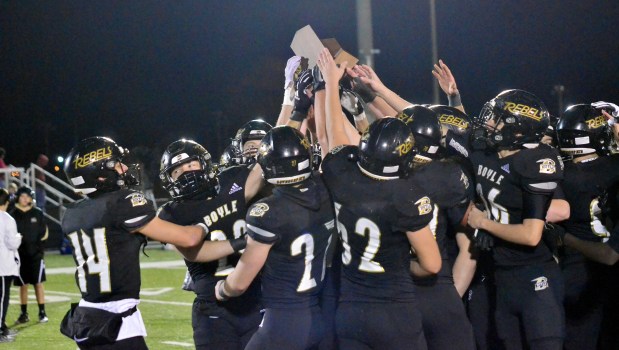 Boyle County took the hard way to an easy win.

The Rebels reached their destination with relative ease, advancing to the Class 4A semifinals with their third running-clock win in as many postseason games.

The road to Boyle’s fifth consecutive regional championship was not without potholes, however. The Rebels made mistakes Friday night in their victory over Scott that didn’t affect the outcome but did generate some frustration.

Even so, Boyle won 51-14 at Rebel Stadium to continue its march through the 4A bracket, and coach Justin Haddix said it’s far better to learn from a game like this than it would have been to learn from a loss.

“It’s a great learning experience for us,” Boyle coach Justin Haddix said. “We’ll get better from this tonight. That’s what good teams do.”

Boyle (12-1), which has won its three playoff games by a combined score of 150-39, is within one win of reaching the state finals for the third consecutive season and the fourth time in five years.

The Rebels will host Logan County this Friday in a semifinal for the chance to play for the 4A championship Dec. 3 at Kroger Field in Lexington.

On a frigid Friday night against Scott, the Rebels found themselves in an unfamiliar position after falling behind for the first time in nearly three months, but they bounced back to score 30 unanswered points before the first quarter ended.

And they pulled away by relying on two things that are always effective in the playoffs: a solid defense and a good ground game.

“This day and time, when you get in these playoffs and it’s cold and rainy or whatever it is, you’ve got to be able to play defense and run the football, and we were able to do that tonight,” Haddix said.

Avery Bodner rushed for 212 yards and five touchdowns to lead the Boyle offense, which got the majority of its yardage on the ground for the third time in four games.

Scott (8-4) got the ball four times in the first quarter but ran only nine offensive plays and lost yardage on seven of them for a net minus-26 yards.

“I feel like we stuck together well,” Bodner said. “We faced a lot of adversity this game, and it didn’t always go the way we wanted it, but we stuck right there together.”

Boyle went to the air early in the game, as it so often does, but its first series ended with a 99-yard interception return for a touchdown by Scott’s Cameron Patterson.

The pick-six put the Rebels behind on the scoreboard for the first time since their Aug. 28 loss to Lexington Christian.

It was one of three interceptions thrown by quarterback Jagger Gillis, who had been picked off only three times in 22 previous games at Boyle over the past two seasons.

“Turning the ball over, that’s something we haven’t done all year, and we get in the regional final and turn it over three times,” Haddix said. “It’s very frustrating as a coach, especially as somebody who’s calling the offense.”

A second interception led to Scott’s only offensive touchdown in the second quarter, but Boyle led 30-7 by then.

Haddix took responsibility for what he said was aggressive play-calling, and the Rebels turned to the running game. They averaged 8.2 yards per carry as they ran for 229 of their 346 yards, and Bodner averaged 11.8 yards per carry as he surpassed the 1,000-yard mark.

“When our passing game was down, we relied on our running back, and (he) went downhill and got those first downs for us,” Boyle offensive lineman Nathaniel Rush said. “We work our butts off for him so he doesn’t get touched.”

Haddix said both the blocking and the running were superb.

“They’re not touching him ’til he’s 10 yards down the field, but he’s making somebody miss, too,” he said.

The Rebels scored on four straight series following the pick-six on their opening drive, using a total of only 11 plays to generate 28 points.

Scott’s offense struggled behind its backup quarterback in the first quarter. Gus Howlett, the regular QB, didn’t enter the game until late in the period and the Eagles didn’t attempt a pass until the second quarter.

Howlett accounted for most of Scott’s offense, passing for 129 yards and rushing for 118.

The Eagles did not quit even after falling far behind, and the Rebels didn’t reach the mercy rule threshold until midway through the third quarter.

“I think we kind of slacked off,” Bodner said. “We just thought they were going to roll over like (Lexington) Catholic did (a week earlier).

But they didn’t, they kept fighting, and we had to fight back.”

That created some teaching opportunities for Boyle’s coaches as they prepare for the semifinals.

“We’ve got some things we’ve got to clean up,” Haddix said.

One thousand: Bodner became the second Boyle running back in as many seasons to surpass 1,000 rushing yards.
The sophomore didn’t become the Rebels’ most-used back until the fifth game of the season, and this was his first game of 200 yards or more.

“It’s amazing. It’s a good feeling,” Bodner said. “I never expected to get a thousand as a sophomore.”

“I’ve got to thank my O-linemen. They always open up big holes for me,” he said. “The O-line, my coaches, this team, everybody blocking for me, I couldn’t do it without those guys.”

Rushing in: Nathaniel Rush scored the first touchdown not only of his high school career but of his life when he rushed for a 3-yard score that gave Boyle the lead for good at 14-7.

“I’ve never scored before,” Rush said. “No points are on my name.”

Rush lined up in the backfield and carried the ball straight up the middle behind some of his fellow linemen.

Rush, who also plays on the defensive front, said he was the one of Boyle’s regularly used defensive linemen who hadn’t scored a touchdown, but he also downplayed his big moment.

“It’s just another day,” he said. “We’re working to get to Kroger Field. That’s our goal.”

Extra points: The Rebels’ pass rush produced their second safety in three games when Jackson Smith sacked Scott quarterback Dasani Lane in the end zone during the first quarter. It was one of four sacks in the period for Boyle; Tommy Ziesmer had two and Gillis had one.

Cole Lanter caught a 3-yard TD pass from Gillis to cap Boyle’s first-quarter scoring. Gillis went 9 for 15 for 117 yards, and Lanter had five catches for 39 yards. … Trey Lanter intercepted a pass and returned it 40 yards on the final play of the game.

Turkey day practice: Thanksgiving practices are special again this season, and Haddix reminded the Rebels following Friday’s game of the opportunity they’ll have Thursday to spend part of their holiday preparing for their semifinal game.

A year ago, the second round of the playoffs fell during Thanksgiving week, as the regular season was delayed for three weeks and the postseason was pushed back two weeks due to the COVID-19 pandemic.

Now that the schedule has returned to normal this fall, Thanksgiving once again coincides with the semifinal round and Boyle is among a more exclusive group of 24 teams that can practice Thursday.

Haddix said it will be dinner first, football later for the Rebels, who will practice after dark.

“We’ll let ’em eat, and I don’t like that turkey laying on them all day, so we’ll have a late practice on Thursday,” he said. “We’ll stay normal (on Wednesday), and then we’ll go a little later on Thursday. They’ll eat all that turkey, and then I can run it off of them a little bit.”

Playoff week four: Logan will be practicing on Thanksgiving for only the second time in school history before making the trip to Boyle for its first semifinal appearance Friday.

Logan defeated Spencer County 52-14 on Friday to write the latest chapter in one of the state’s most compelling turnaround stories of recent years.

The Cougars had lost 33 consecutive games when Todd Adler took over as coach in 2016. Now they have a string of five straight winning seasons and the first regional championship in the school’s 40 football seasons.

“It’s been a lot of hard work, a lot of grind, a lot of blood, sweat and tears by us, the kids, the parents, the administration, everybody,” Adler told the Daily News of Bowling Green. “Thirty-nine years it took us to get here, and the fight in these kids is unbelievable.”

Logan (10-3) rushed for 406 yards and five touchdowns in its win over Spencer. Junior Ryan Rayno ran for 175 yards and two TDs, and senior Wyatt Blake ran for 102 yards and one TD.

The Cougars have gotten almost exactly two-thirds of their offensive yardage on the ground this season, averaging 227 rushing yards and 117 passing yards per game.

Logan’s ledger includes three wins against teams with winning records. The Cougars defeated Hopkinsville twice — by a total of three points — and Hopkins County Central once. They have lost to Russellville and South Warren, both of whom are still alive in the playoffs, as well as Greenwood.

“We are playing our best football right now,” Adler told the Daily News. “Never in a million years did I dream we would be at this point. … But we will prepare. Hopefully we will be ready for the challenge.”

Franklin County (10-3) and Johnson Central (11-2), Boyle’s opponents in the state finals in 2020 and 2019, respectively, will face off in the other 4A semifinal Friday in Paintsville.