Johnson Central players will be thinking of late coach Friday 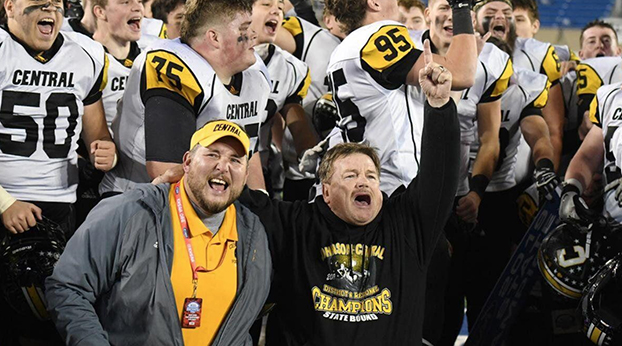 Tributes have been multiplying for Jim Matney in the two months since the Johnson Central coach’s untimely death, and Justin Haddix expects to see one more Friday night.

The Boyle County coach said he thinks Johnson’s players will honor their late coach the best way they know how during the Class 4A championship: by giving their all on the field.

Haddix said he has no doubt that the memory of Matney will be on the minds of the Golden Eagles before, during and after Friday’s game in Lexington.

“I think it has to be,’ Haddix said. “We know they’re going to play hard, and I’m sure coach Matney would want that.”

Matney, who helped Johnson become a powerhouse in his 18 seasons at the school, died Sept. 28 due to complications from COVID-19 and a stroke. He had become one of the most successful coaches ever in eastern Kentucky, winning 309 games and two state championships in 38 seasons at Johnson and Sheldon Clark.

Haddix played for Breathitt County and spent his entire coaching career in eastern Kentucky before coming to Boyle in 2020, and he said he has a great deal of appreciation for what Matney accomplished at Johnson.

“You want to be part of a community that loves football, and at Johnson Central he made it that way,” Haddix said. “He really transformed that place.

“If you look at how much he won and what he did for that program, it’s a testament to him and what he’s done. He was one of the best coaches, not just in eastern Kentucky, but in the state.”

Haddix said he and Matney were acquaintances but not close friends. Their teams faced off three times during Haddix’s four years at Perry County Central, and Johnson won two of those games.

The two talked last year before Boyle played Franklin County in the state finals; Franklin had beaten Johnson in the semifinals.

“He gave me his thoughts on Franklin County,” Haddix said.

Steve Trimble, a former Johnson coach who was principal there when Matney was hired in 2004, was named the Golden Eagles’ interim coach after Matney was hospitalized.

Hours after Matney died, the lights were turned on at dozens of high school, middle school and college football fields across Kentucky, including Boyle’s Rebel Stadium. Three days later, at Johnson’s first game since his passing, that school renamed its field Coach Jim Matney Field.

Looking back: Had any one of several plays in the 2019 Class 4A championship turned out differently, Boyle might be playing for its third straight title Friday. But the biggest factor in the Rebels’ 21-20 loss was their minus-5 turnover margin.

Their three fumbles and two interceptions were too much to overcome, even though the Rebels had a chance to take the lead in the closing seconds before turning the ball over on downs at the Johnson 28-yard line.

Haddix, who watched the game from the Kroger Field stands, said he remembers being surprised that Boyle had that chance.

“It was a hard-hitting game, a physical game. Both teams were good,” he said. “For Boyle to be within one point is crazy after turning the ball over five times.

“When you get in those games, it comes down to special teams and turnovers and limiting big plays.”

Extra points: Boyle is trying to become the seventh Kentucky school to win at least 10 state championships. The Rebels trail only Trinity (27 championships), Highlands (23), Beechwood (15), Mayfield (12), St. Xavier (12) and Danville (11) on the list of most titles won. All of those schools won their first title at least 15 years before Boyle won its first in 1999.

Based on depth charts submitted by the schools to the KHSAA, Boyle has two offensive or defensive starters who also started in the 2019 state finals, offensive tackle Zach Mason and defensive end Tommy Ziesmer, as well as two specialists, kicker-punter Jackson Smith and long snapper Collin Tiller. Johnson has two starters who also started that game, offensive tackle Grant Bingham and quarterback-cornerback Grant Rice, who played only on defense in the 2019 game.

Boyle leads the series with Johnson 2-1. The Rebels won regular-season games in 2009 and ’10, and the Eagles won their meeting in the 2019 Class 4A final. … Haddix is 24-1 in two seasons as Boyle’s coach and 114-39 overall in 12 seasons. Trimble, who coached Johnson from 1988-91, is 10-1 this season and 26-28 overall. … Billy Mills of Alvaton will be the referee for Friday’s game, leading a seven-man crew made up of officials from Louisville and western Kentucky.

Stoops anxious to continue building program after agreeing to…