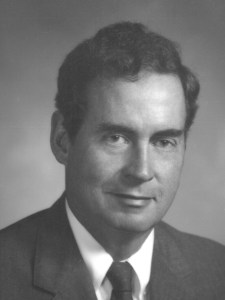 He was a lifelong member of The Presbyterian Church, having served as a Sunday School Teacher, Deacon, Elder and Trustee. Nelson attended public schools in Danville through the 9th grade and graduated from McCallie School in 1950, Centre College in 1954 and Harvard Law School in 1957.

Upon graduation from law school, he joined the U.S. Army Reserve and was later called for one year of active duty with the Kentucky 100th division at Fort Chafee, Fort Smith, Arkansas.

On January 1, 1980, he became the President of Farmers National Bank in which capacity he served until retirement on June 30, 1997.

In 1986-87, he served as President of the Kentucky Bankers Association.

Throughout his business career, he was active in many civic organizations. He served as President of the Jaycees, The Chamber of Commerce, The Historical Society and The United Way. He served 50 years as a member of the Board of the Danville Library Inc., the last ten years as Chairman. He served on the Board of Trustees of Centre College from 1978 until his death with offices of Secretary, Vice Chairman and Life Trustee. He was awarded an honorary degree of Doctor Of Laws by Centre in 1998.

Rodes was a member of the Danville Rotary Club since 1959 and The Anaconda Club since 1960, both of which contributed greatly to his enjoyment of life in Danville. With his family and friends, he particularly enjoyed golf, tennis, skiing and summer vacations at Crystal Lake, Michigan. He served on the Board of Directors and as President of the Danville Country Club and on the Board of Governors of Crystal Downs Country Club in Michigan.

He and his wife, Martha enjoyed traveling together and he also enjoyed many years of looking over his farm and cattle.

The funeral service will be at 1 p.m., Monday, December 6, 2021 at The Presbyterian Church in Danville.

Rev. Caroline Kelly and Dr. Eric Mount will officiate. A private burial will be in Bellevue Cemetery prior to the service. The family invites friends and family to visit following the service at 305 N. Third St. Memorial donations are suggested to Centre College, Danville Public Library, KET, and The Presbyterian Church. Please sign the online guestbook and send a Hugs from Home at www.stithcares.com.