Howard delivers on expectations for Kentucky 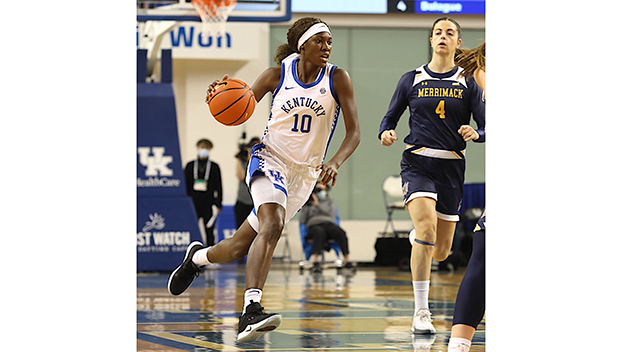 Rhyne Howard doesn't want to sound cocky but knows she can score a lot of points on what she is a normal game in her mind.

All-American Rhyne Howard is expected to do a lot for Kentucky and so far this season has delivered. In UK’s most impressive win against West Virginia, she had 27 points (she was 5-for-7 from 3-point range), seven rebounds and four assists.

For Howard, it was nothing special.

“Not to be cocky, I can do that day in and day out. That’s honestly like a normal night for me I would say,” Howard said.

“We have asked her to step up and be a leader vocally and also lead by example,” Elzy said. “We want her to still be aggressive offensively. Want her to hunt shots and take good shots.

“We have really challenged her to sprint in transition and make plays in the open court where people do not have time to double team her.”

Elzy has complete trust in her senior star and her basketball IQ.

“She knows what a good shot is for her and she does have the green light to take shots in our offense,” Elzy said. “I want her to play downhill and make the defense grind and not just take good shots, but great shots.

Horsey stands out on the field, in his community