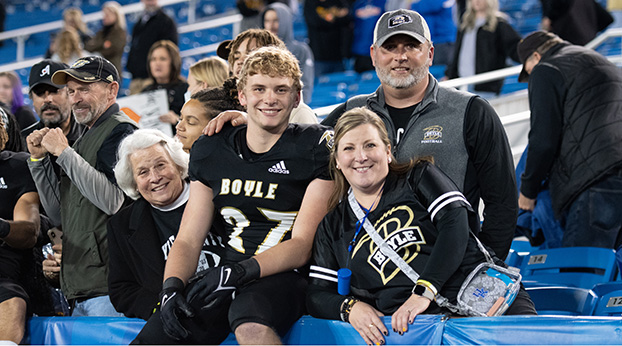 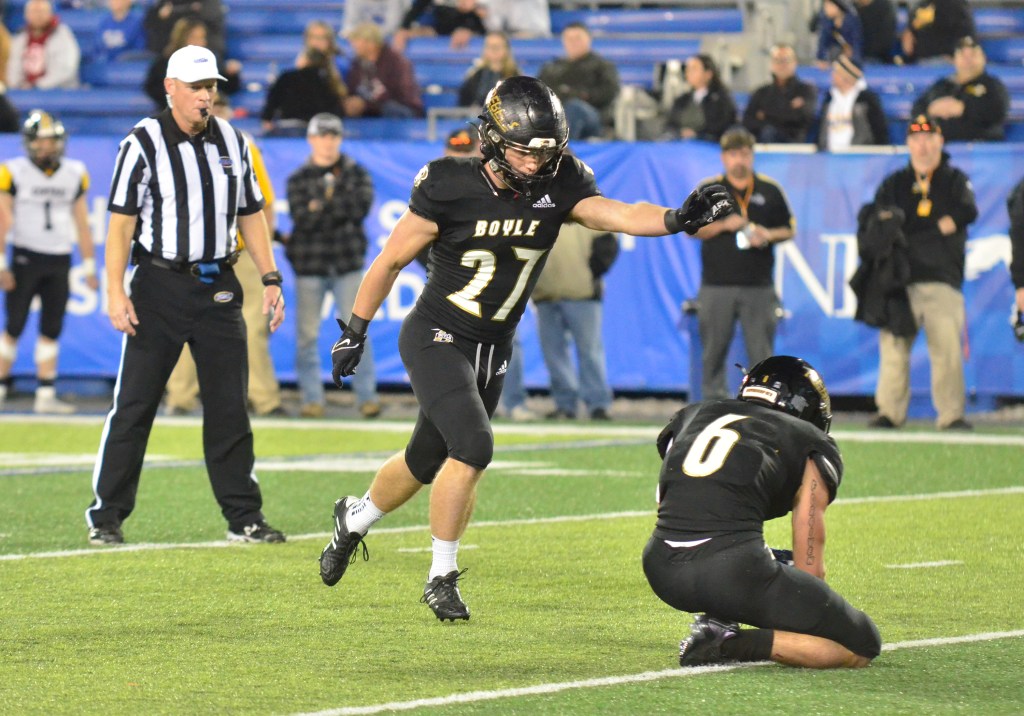 Jackson Smith kicks a point after for the Rebels in the 2021 Class 4A UK Orthopaedics State Football championship game at Kroger Field in Lexington. – Photo by Mike Marsee

He’s been committed to Kentucky for over eight months but Boyle County senior Jackson Smith is still “excited” to finally be able to officially sign his scholarship with UK on Wednesday during a ceremony at his high school.

Jackson grew up a Kentucky fan and his father, Andy, was an all-Southeastern Conference punter at UK in 1999 when he averaged 47.3 yards per punt.

“This has always been a dream, so obviously it’s going to be an exciting day for me,” said Smith, who has won two state championships with the Rebels.

“I think I had a pretty good season this year,” Smith said. “One goal I had was to kick a school record field goal. The record was 48 yards.

The one I did get to try that could have broken the record got blocked.

“But I had a good year. My kickoffs were stronger than ever. I averaged 42.1 yards per punts. That’s not bad, not great. I still have a lot of room to improve and I will improve once I get to Kentucky.”

Smith did all that this year while also playing linebacker, something that probably did take away from his kicking at times.

“It was fun playing linebacker. I did not have the same expectations to be perfect at linebacker as I do when I am kicking,” Smith, one of the nation’s top-rated overall kicking prospects, said. “I didn’t get to play linebacker in the state championship game (this year) because of the defensive package we were in since Johnson Central ran the ball every play.

“But getting to play defense made for a different year. It was my first time playing high school ball other than just kicking and will be the last time I get to do that. So that made it even more fun for me.”

He has not really talked to Kentucky coaches about what his specific role might be next season. He can punt, kick off and handle field goal/extra point duties.

“I’ll just go in and see what I do the best for the team,” Smith said. “There are only two guys in all of college football who do all three things. I think it really just depends on the day what I do best. Some days I am crushing punts and think I want to punt for the rest of my life. Some days I mishit punts and make field goals.

“In high school, special teams are taken seriously but not seriously enough. Most practices I only hit two or three balls. At UK I will have my own workout program and the way I lift (weights) will be tailored to helping me. That’s why I do expect to improve a lot and get better at Kentucky.”

Smith plans to stay at Boyle for his entire senior year and enroll at UK in June. He’s not sure what UK specialists will be on campus then because players have the option to take a COVID year and play an extra season.

“Everything, I guess, is kind of up in the air about who will be there still,” Smith said. “However, I think I will have an opportunity to start next year.”

He knows he will have one familiar face on the team — Cole Lanter. The talented Boyle receiver has accepted a preferred walk-on opportunity with the Wildcats.

“I am excited to know there will be two of us at Kentucky, and possibly three if Tommy (Ziesmer) decides to come next year,” Smith said.

“That would be something to have three players from Boyle County on the team.”

The punter/kicker is also excited about the other players in Kentucky’s 2022 recruiting class. He’s played against Frederick Douglass receiver Dane Key and Johnson Central offensive lineman Grant Bingham. He’s watched video of Nashville receiver Barion Brown and his grandparents live close to twins Destin and Keaten Wade of Nashville and have told him plenty about both players.

“I think we have some great players in this class who will do some great things at Kentucky,” Smith said. “I’m really proud to be part of a class like this.”

Carr and Myers shine as the Rebels roll in…