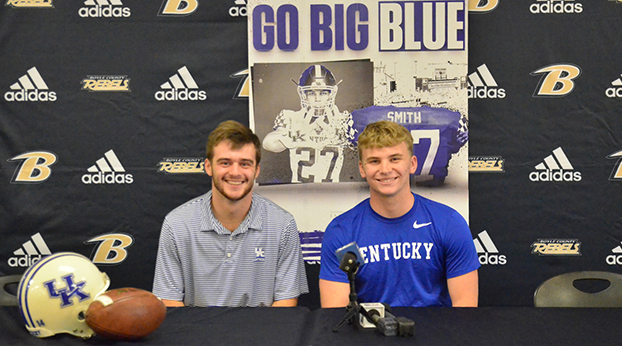 Cole Lanter, left, and Jackson Smith of Boyle County pose at a signing ceremony Wednesday at the school. Smith signed a letter-of-intent to play for Kentucky, while Lanter will join the Wildcats as a preferred walk-on. - Photo by Mike Marsee 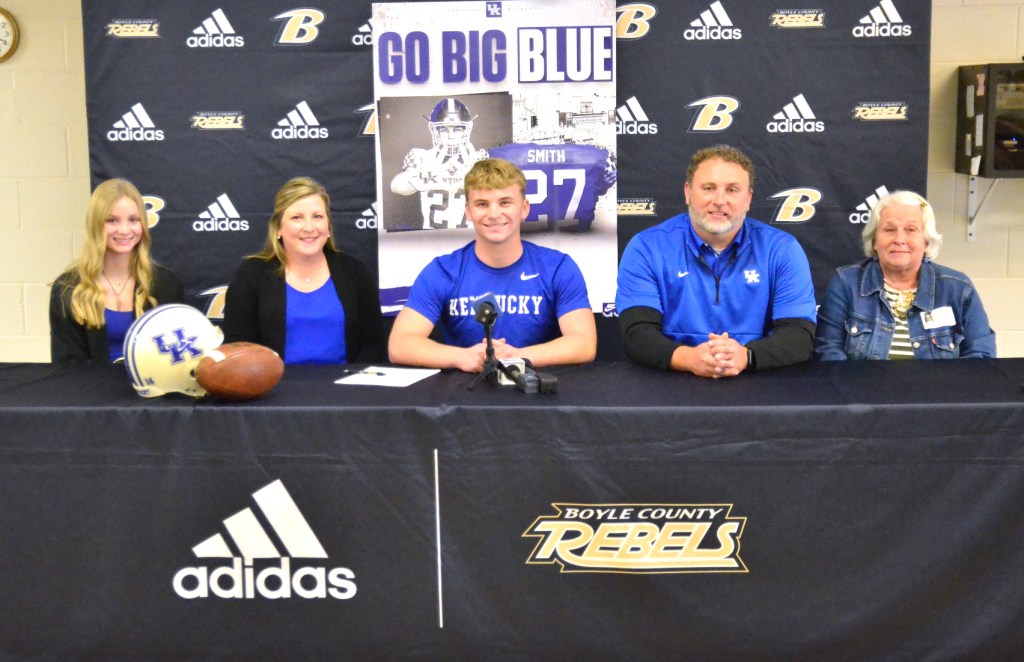 For Jackson Smith and Cole Lanter, there was no choice to be made.

Their college decisions were made as soon as each of them realized Kentucky would have a spot on its roster for them.

The Boyle County seniors made those decisions official Wednesday on the first day of the December signing period, and both said they knew where they wanted to play college football if given the opportunity.

“It’s a little kid’s dream,” Lanter said. “You grow up in a small town in Kentucky, that’s what you dream of, that’s what you want to do, you always want to represent the blue and whilte. Being a Wildcat is just something I couldn’t pass up.”

Less than two weeks after they helped Boyle win a second straight Class 4A championship, Smith signed a national letter-of-intent with Kentucky, while Lanter affirmed his acceptance of an offer to join the Wildcats as a preferred walk-on. 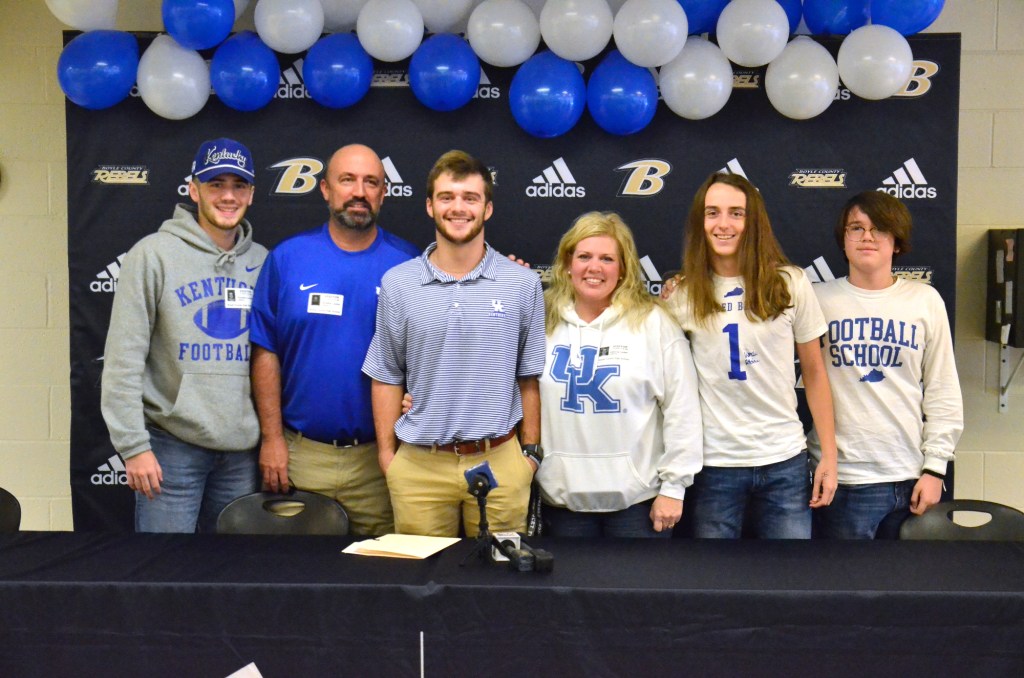 Cole Lanter, third from left, of Boyle County poses with his brother Reed, father Tim, mother Johnna, brother Trey and brother Cook at a signing ceremony Wednesday at the school. Lanter is going to Kentucky as a preferred walk-on. – Photo by Mike Marsee

Lanter committed to Kentucky within 48 hours of receiving an invitation to join the program last month. Smith took a little longer to consider his options after getting an offer from the Wildcats in June 2020, but he said he never seriously considered any other school before committing to UK in April.

“All these schools were recruiting me … and I’ve been to several different places and camps in the summertime, but the whole time I just knew UK’s where I want to be,” Smith said.

Smith is one of the top-rated placekickers in the nation. He is ranked as the top kicker and punter in the class of 2022 by Prokicker.com, and he is ranked No. 9 among kickers in his class by 247sports.com.

He made 72 of 78 extra-point attempts and seven of nine field-goal attempts and had 68 touchback kickoffs this season for Boyle.

He was recruited primarily as a kicker but was listed as a kicker-punter in the information UK released on its recruiting class, which was ranked 11th nationally by 247sports.com. He said he’ll be working on both disciplines and will make himself available for placekicking, kickoffs, punts, or all of the above.

“I’m just going to go in there and work and see whatever they need me to do to help the team,” he said.

Smith said he feels fortunate to have gotten a scholarship offer from Kentucky given that many schools only sign kickers every four years or so, and the offers often come later than they do for position players.

“It’s worked out for me, and I’m grateful for that,” he said.

Things worked out for Lanter as well, even without a scholarship offer from Kentucky. The wide receiver, who also played defensive back and returned kicks and punts, said the Wildcats’ coaches made him feel welcome.

“Regardless of my title, those coaches treated me like family,” he said. “They told me no matter what I’m going to be treated the same, I’m going to get equal opportunities, and I love to play football so I’m going to go there and just do what I do.”

Lanter was named a finalist for the Kentucky Football Coaches Association’s Mr. Football award after he led the state in receptions (78, a school record), receiving touchdowns (21, a school record) and finished second in receiving yards (1,288). He scored 27 touchdowns in all and had 32 tackles and a team-high three interceptions.

He said he fell in love with the rebuilt Kentucky offense installed this year by offensive coordinator Liam Coen, who came to UK from the NFL’s Los Angeles Rams.

“I watched him with the Rams, and I love what he does,” Lanter said.

Like Smith, however, he said he is open to playing wherever he is needed.

Boyle coach Justin Haddix said both players’ competitive nature will serve them well at the next level.

“They know the work ethic, they know everything it takes to be successful,” Haddix said. “I’m just very, very proud of them, and they’ve got a great opportunity.”

Smith is considered a legacy recruit as the son of a former Kentucky player. His father, Andy, was a punter for the Wildcats who earned first-team all-Southeastern Conference honors in 1999.

Lanter’s uncle Bo played basketball at Kentucky from 1979-82, and his cousin Todd was a walk-on with the Wildcats from 2012-15.

Haddix said he isn’t surprised that both players jumped at the chance to go to Kentucky, and not just because of their loyalties.

“Coach (Mark) Stoops is doing a great job … and he’s made it the (place) where kids want to go to be successful,” he said.

Lanter is headed to UK right away. He will complete his high school graduation requirements Friday and will be in Lexington on Jan. 3.

“It really just gets me a jump on everybody,” he said. “I’ll get to gain weight, get stronger. They can teach me how to run and get me in shape and get me in condition to play against these SEC players. I’m really looking forward to it.”

He said he believes he’s prepared for a quick transition to college life.

“My parents have done a great job raising me, preparing me, and they always push me to be my best, and I know I’ve got God on my side,” he said.

Smith said he will continue to work on his own both on the field and in the weight room before moving to Lexington next summer.

“There’s a lot of room to improve,” he said. “I need to get stronger, and I’ll be kicking on my own two or three times a week.”

The two longtime friends said they’re glad to be headed to Kentucky together.

“That’s awesome for us both to be able to represent Boyle County at the same time,” Smith said.