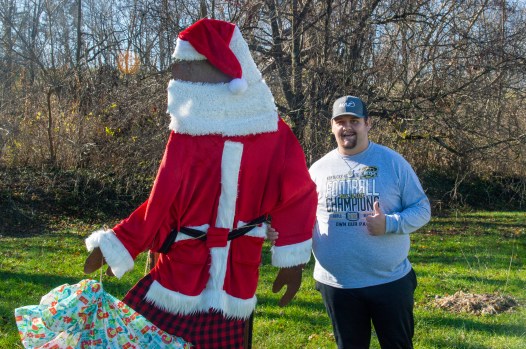 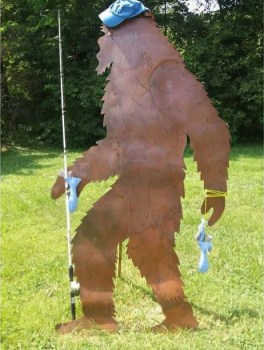 Darryl the Bigfoot comes back from a fishing trip in the summer. - Photo submitted 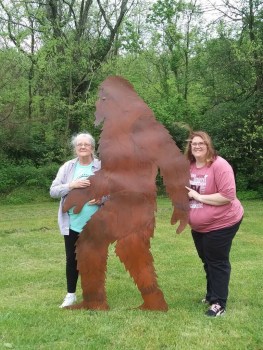 Dianne Wall stands proudly next to Bigfoot with her daughter Amy Webb, who bought her the statue for Mother’s Day. - Photo submitted

Perryville resident Dianne Wall was driving down her street one day when she spotted Bigfoot in front of a furniture outlet.

She saw his statue propped up against a light pole and yelled, “There’s Darryl; I want Darryl!”

When she went back later in the day hoping to buy the Bigfoot, he was gone. But without knowing, her daughter Amy Webb bought him for her as a Mother’s Day present this year.

Wall proudly displayed Darryl in her front yard for everyone to see. For some holidays since, Wall has been dressing up the Bigfoot statue in different costumes. She gave him a fishing pole, hat, and fish in the summer; and for Halloween, Wall dressed him up as a Native American with a bow and arrow and feather hat. This December, Wall dressed him up as Santa Claus.

The name Darryl comes from a famous Progressive insurance commercial, starring Flo the Progressive lady. In the commercial, Bigfoot complains to Flo that no one pays attention to him anymore when they’re out hiking. Flo says that people are too busy bundling their insurance. She consoles Bigfoot, assuming his name is Bigfoot. Bigfoot tells her, “My name is Darryl.”

Wall said she was drawn to the statue because she likes Bigfoot.

“I just like him and there’s always a mystery to him; he’s just not someone to be messed with,” Wall said.

Wall made the Santa costume out of a red bathrobe, some white fluffy material and pajama pants. She said the first day Darryl had the costume on, people driving by were honking the whole day.

“I love it when people go by and they’ll give you a thumbs up, kids wave at him, or people honk,” Wall said. “It makes me feel good that everybody likes him; when they go by and the kids all wave it just makes you feel good, and it gives me something to do.”

Wall is a retired factory worker. She grew up in Lincoln County and lived in Danville for much of her life.

She worked at Dana Incorporated in Danville, which makes gaskets for automobiles. In 2009, she moved to Perryville to rent her daughter Amy’s house so she could buy a new house.

Wall’s grandson, Jackson Webb, helps her dress up Darryl each holiday, and fixes him up when a storm messes up his costume. He said the Bigfoot is a new family tradition and they look forward each holiday to what Wall will come up with.

Jackson has lived in Perryville his whole life. He is studying aviation at Eastern Kentucky University and wants do to missionary aviation. Jackson loves that Darryl allows his grandmother to spread joy to the Perryville community.

“I love that she has an admiration for the community; her happiness comes from people,” he said. “It’s amazing to see that she gets to see the enjoyment on kids’ faces or people when they drive by. It makes me and my family happy inside.”

Wall’s family and friends love taking pictures with Darryl. She has three kids and six grandkids.

“It’s just fun, plus it gives people something to look at,” Wall said. “With the pandemic that was going on, it just gives you something to do where you don’t have to worry about everybody being sick.”

In the future, Wall plans to dress up Darryl differently for each holiday. She said next year he might be the Grinch. Jackson is excited to come up with more ideas with her and to see how much more creative they will get each year.