December 1921 at Kentucky School for the Deaf;
Preparing for the holidays at a residential school 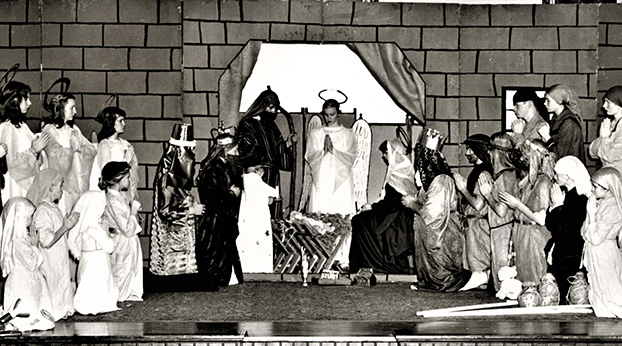 The Christmas holidays at schools for the Deaf presented a special challenge for the students who were away from their families at this festive time of year. The staff knew that It was imperative to keep sadness and homesickness at bay by keeping the students busy. KSD teachers found many opportunities to entertain the younger students as the holidays approached.

“The teachers of the primary classes have been taking the little ones uptown the past week or two to give them a sight of the Christmas display. Many of the children are from the country or small towns, and to visit the beautifully decorated stores filled with Christmas goods is like a trip to fairyland to them,” George McClure, editor of The Kentucky Standard, wrote.

Student Reporter Sara Miller described the downtown sights: “Last Wednesday Miss Jennie Lee and her class went uptown. They saw many pretty things. They saw the Home Bakery. A large white cake was in the window. They went into the Fish Market and saw many fish in the ice chests. Then they went into the Five and Ten cent store. Four girls bought some candy and each paid five cents for it. They saw a beautiful tree and many, many fine dolls in Wiseman’s windows. Two pretty dolls hung on the wall. They went into the Hub and went upstairs to “Toyland” in the elevator. They saw toy trains, many dolls, two doll swings, and some toy automobiles that ran very fast on the floor. They saw large pictures of the “Wonder Football Team” in a window. They had a fine time.“

Some periods of heavy rain kept the boys from their usual outdoor opportunities to let off steam. One of their favorite areas had been the old “chicken penitentiary” behind the kitchen. Built in the good old days when chickens were cheap, and keeping them in a big pen was all right, the soaring prices of the war years cut down the size of the flock. For a long time, the pen had only been used by the boys as a jail for one another. It was a favorite sport to lure someone inside and then fasten him up, leaving the victim to climb out as best he could. In November the “penitentiary” was torn down and a modest-sized coop replaced it. The boys were forced to find new avenues for mischief.

In early December, KSD Superintendent Dr. Augustus Rogers sent out a letter to parents requesting that they allow their children to remain at school during the holidays. “Some of the children after reaching home will feel that they have been away a long time and will not want to return. This is especially true of the younger children and those away from borne for the first time. Indulgent parents will find it hard to force them back. As all of our pupils are now happy and contented, I hope that parents will not do anything to interrupt their progress in school or to cause any break in their present contentment.”

“On December 22, 1921, the Kentucky Standard editor described KSD’s holiday plans: “School will close Thursday, December 22nd, for the holidays and reopen Tuesday morning December 27th. It is the custom here to combine the two legal holidays, Christmas and New Year, so as Christmas comes on Sunday, this time the Friday before is given in its place, and the Monday following in place of the New Year holiday. Our pupils, save a few exceptional cases, do not go home, but they will have their full share of Christmas cheer “

“A splendid Christmas play has been prepared under the direction of Mr. and Mrs. Grow, and will be staged on Christmas Eve. Santa Claus has promised to be present to reward his good children. It is whispered that Mrs. Santa, so long kept in the background, is going to celebrate the emancipation of woman from the tyranny of mere man, by taking Santa’s job away from him this year, and each one will receive gifts of candy and fruit. Boxes from home will be given out Christmas morning, and there will be a dinner worthy of the day. A Christmas party will be given Monday; for the younger pupils in the afternoon, while the older pupils will have theirs at night.”

The older students asked school leaders and staff what they wanted for Christmas. While Dr. Rogers wanted a box of cigars and Mrs. Rogers, a bouquet of flowers, Mr. Madison Lee chose a red tie. Other staff members wanted a turkey, a checkered suit, a tire for an auto, a string of beads or a pair of white spats.

At the school on Christmas morning at nine o’clock the staff gave out boxes from home. Every child in school was remembered even though a few received nothing from home. As in the past, good Samaritans remedied this neglect. Monday afternoon the little ones had a Christmas party, and at night the older pupils had theirs. Students of all ages played traditional games and signed carols together, and the Christmas spirit held full sway. The close of the party, and with it of the holiday season, came all too soon for the young people.

The school publicly thanked the generous individuals who sent presents to Santa Claus to be given to the boys and girls at Christmas time: Mrs. Sue S. Lord, of Chicago, Mrs. Lucy Hardy and the Club of Louisville Ladies of which she is a member; Mrs. A. S. Robertson, Mrs. G. N. Jean and ‘Mrs. Louis Maninni; Mr. Harry Giovannoli, of Lexington, Mr. I. T. Lanier, of Danville, and Miss Eloise Urner, granddaughter of Mr. I. T. Lanier, for her annual box of beautiful gifts.

While most of the parents heeded Dr. Rogers’s request to leave their children in school over the holidays, a few insisted on taking them home for the short vacation. In January Dr. Rogers received a letter from one of these:

“John does not want to go back. I am anxious for him to go but I hate to force him. What must I do? “

The editor notes that John is just an average little boy and naturally is in no hurry to give up the petting, the feasting, and the freedom from schoolwork. He asks rhetorically: “What advice fits the situation?