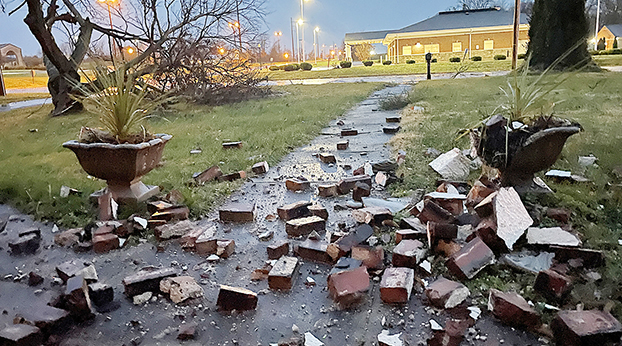 The chimney of a house on Perryville Road was destroyed by the early morning storms on Saturday, Dec. 11. That storm has now been confirmed to be an F1 tornado. - Photo by Jeff Moreland

The National Weather Service has confirmed that five tornadoes came through Boyle County on Saturday, Dec. 11.

The NWS had previously confirmed two tornadoes in Boyle County, an EF-1 and an EF-2. But they were able to confirm three more EF-1 tornadoes throughout the county.

What was previously thought to be one EF-2 tornado that went through the Danville airport and continued northeast to Chrisman Lane was actually two separate tornadoes. The EF-2 went through the airport and ended just past Airport Road. An EF-1 later touched down on Chrisman Lane. Another EF-1 tornado touched down near Hedgeville, and another near Old Bridge Golf Club and continued to Bryantsville.

“According to the property valuation administration office, 2,900 parcels valued at $493 million stood in the pathways of these five tornadoes,” said Boyle County Judge-Executive Howard Hunt. “Should these have taken the path that Mayfield experienced, it would have been catastrophic.” 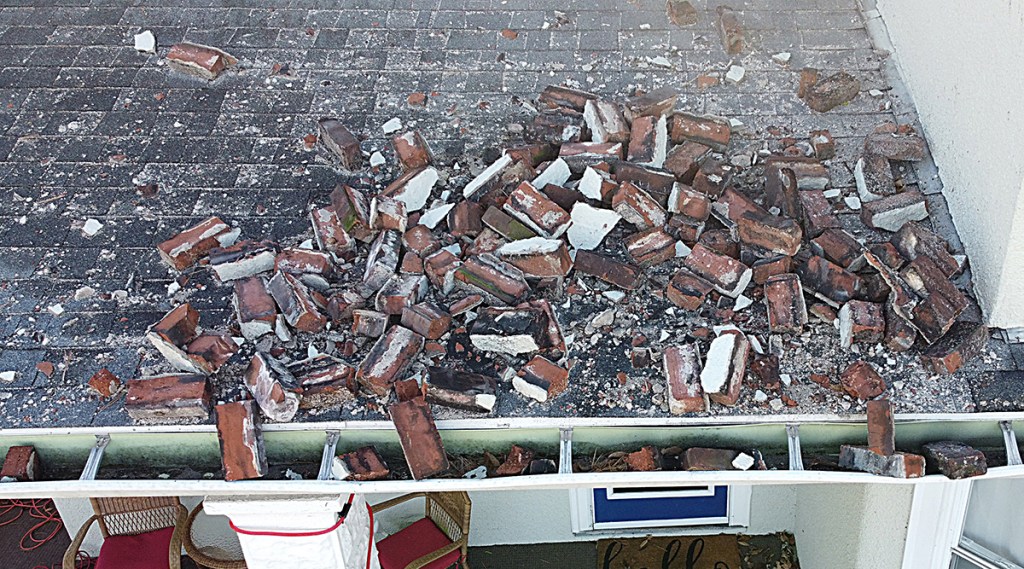 The chimney of a house on Perryville Road was destroyed by the early morning storms on Saturday, Dec. 11. That storm has now been confirmed to be an F1 tornado. – Photo by Jeff Moreland

Danville EF-1 tornado
• It started at 4:02 a.m. near Morning Pointe of Danville on Perryville Road just south of Millennium Park. It blew the roof off of a gas station, and caused significant roof damage to First Apostolic Church, and several homes and warehouses. In the field next to Morning Pointe, tall trees were uprooted and trunks were snapped.
• The tornado continued through neighborhoods along West Lexington Avenue, where trees were uprooted and snapped. Roof damage occurred to homes between Jackson Park and Bellvue Cemetery.
• It crossed Highway 2168 and continued to Waterworks Road, where it completely destroyed a barn, ripped the roof off of a barn outbuilding, and damaged the roof of a residence next to those structures. No damage was observed beyond Waterworks Road and it ended at 4:05 a.m.
• It had a maximum wind speed of 110 mph.
• It was 400 yards wide and went for 3.63 miles.

Danville Airport EF-2 tornado
• It started at the end of Simpson Lane, where it caused roof damage to homes.
• The tornado then tore through three airport hangars, damaging or destroying 13 aircraft.
• It crossed Airport road to the northeast, completely destroyed the roof of a house, and severely damaged a barn outbuilding.
• It started at 4:01 a.m. and ended at 4:02 a.m.
• It had a maximum wind speed of 135 mph, a width of 100 yards, and a length of 0.63 miles.
SE Danville Chrisman Lane EF-1 tornado
• The tornado began at 4:04 a.m. on Chrisman Lane near the Boyle/Lincoln County line, where it ripped most of the roof off of a barn outbuilding.
• It continued to the northeast along Chrisman Lane where it damaged the roofs of several other barns. No visible damage was observed from this tornado beyond Cooks Loop and it ended at 4:05 a.m.
• Its maximum wind speed was 93 mph.
• It was 50 yards wide and continued for 0.61 miles.

SW Bryantsville EF-1 tornado
• It started in the middle of Kings Ridge Road, continued over houses on Old Bridge Road, crossed the Dix River, and ended just southwest of Bryantsville.
• The tornado damaged some family residences, farm buildings, and trees, starting at 4:08 a.m. and ending at 4:12 a.m.
• It had a maximum wind speed of 94 mph.
• It had a width of 950 yards and a length of 2.93 miles.

East Hedgeville EF-1 tornado
• The tornado started at 4:09 a.m. just northeast of Hedgeville on Lancaster Road, where it caused major roof damage to several homes and barns.
• It continued over Rankin Road then crossed into Garrard County and snapped trees near the Dix River.
• It ended on Lexington Road at 4:13 a.m., where it damaged the roofs of some homes and barns.
• 110 mph was its maximum wind speed.
• It was 600 yards wide and had a length of 1.93 miles.