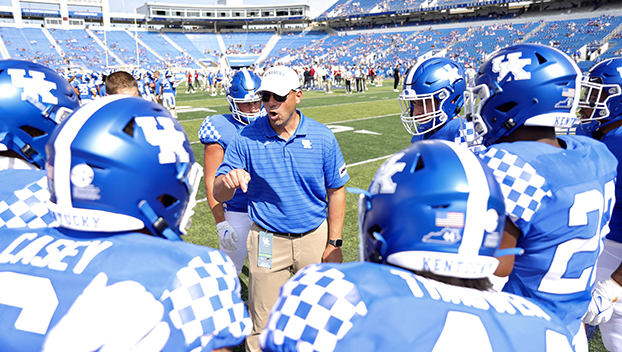 Jon Sumrall will use a lot of what he learned at Kentucky as a player and coach now that he is the head coach at Troy University.

Sumrall’s final game at UK is the Citrus Bowl and he says working under head coach Mark Stoops helped him learn how to “evaluate the most important factors” in how to build a program.

“Mark Stoops is very thorough, very detailed. He has great relationships with players. Guys on the roster understand how much he cares about them,” the UK co-defensive coordinator said.

“He is also very good football-wise. He sees the game in a way that is very impressive. His expertise as an assistant coach was defensive backs but he sees the whole game. He has great vision for what is the right recipe to win games.”

Sumrall said Stoops knows how to devise a game plan without occupying too much of his players’ time to make sure he keeps them fresh for practice and games.

Sumrall also coached under former UK offensive coordinator Neal Brown after Brown left Kentucky to become Troy’s head coach (Brown is now the head coach at West Virginia). Sumrall has talked to Brown “a ton” during his transition time from UK to Troy.

“Neal pays so much attention to detail. He leaves nothing to chance. He is just ridiculously detailed,” Sumrall said “I watched him the whole time I worked for him and took notes of a lot of things he did.

There are so many things that I will do that will be drawn from Neal and Mark.
“I know I have got to be myself. I can’t try to be somebody else. But I am fortunate to have a lot of experiences with great coaches that will help me.”
Sumrall led UK in tackles in 2004 from his linebacker position but an injury ended his career. The next season he worked as a graduate assistant for UK coach Rich Brooks.
“Coach Brooks was amazing to me. I was coming off being the team leader in tackles and was probably going to be team captain if I did what I was supposed to do when my career ended. It was devastating,” Sumrall said.
“Looking back I think it was God’s plan to jump-start my coaching career,” Sumrall said. “Coach Brooks’ mentorship of me was unparalleled. He gave me opportunities and a chance to stay involved in football. I owe him a lot.”