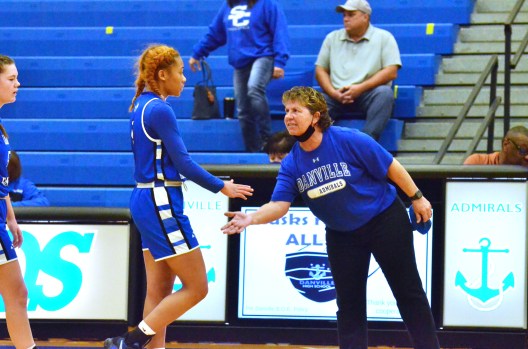 Danville coach Judie Mason greets Love Mays as the Lady Admirals head to the bench for a timeout during the first quarter Wednesday. Mason earned her 500th career win earlier in the week. - Photo by Mike Marsee 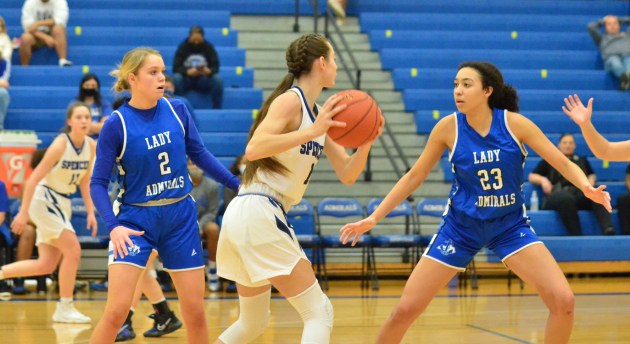 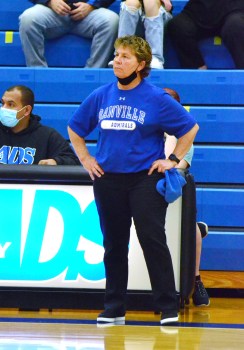 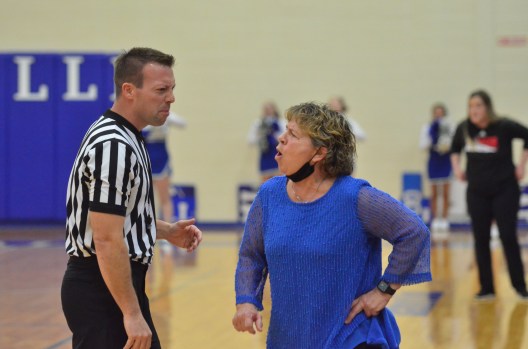 Judie Mason wants to leave her mark on girls basketball, and it has nothing to do with how many wins she has.

The Danville coach reached 500 career victories this week, and she has come to realize that number has significance. She is prouder, however, of a number she can’t quantify: the number of girls she has impacted during her career.

Mason got her 500th win Monday and stands at 503 after the Lady Admirals won four games in three days in their Christmas event.

It’s a milestone that matters, but it isn’t what matters most to her.

“I don’t think they’ll put on my tombstone, ‘Coach Mason had 500-and-some wins,’” Mason said. “I want to be the coach that helped young ladies become better people and be able to survive in the world.”

Mason said her 500th win was just another game — until others began telling her it wasn’t.

When the calls and texts and Facebook posts started coming in, she began to understand it was something special.

“It’s been great to hear my former players text me or reach out on Facebook, and coaches, too,” she said. “It’s more, I guess, than what I thought it was, because to me it was just another game. But when people reach out to you that you’ve battled with over the years, that’s important.”

According to records compiled by the KHSAA, Mason is the 17th girls basketball coach to win at least 500 games. She is the first local coach to do so, and the first coach to do so entirely within the 12th Region.

“I wasn’t chasing wins. I just love this game, and I love kids,” she said. “I don’t have kids of my own, so these are my kids and I want them to be successful. I’ve said all along if kids can make it my program they can make it in the world.”

It still matters, though. Mason averaged 18.3 wins in her 27 full seasons at Danville, Boyle County and Somerset, and her current

Danville team is 10-2 after winning its four games in the Lady Ads Christmas Tournament by an average of 25 points.

“We’re coming together as a team,” Mason said. “I think we got better as a team and individually (this week).”

The vast majority of the wins in Mason’ 28 seasons as a head coach — 88 percent — have come at small schools, and she said that matters to her, too.

She has also done it at programs that were in need of repair. Somerset, Boyle and Danville all had single-digit win totals the year before Mason arrived.

“I’ve never walked into a program that had a winning record,” Mason said. “I like to build programs.”

Mason is one of only three coaches who have been at 12th Region schools to reach 500 wins, joining Roy Bowling, who won 401 games at Laurel County and 568 in all, and Chrysti Noble, whose Rockcastle County team moved from the 13th Region to the 12th in 2005.

Mason played at Whitesburg for John High, who ranks sixth on the all-time wins list with 658 victories, and she was an assistant coach under High for four seasons.

“I always looked up to him, and I always knew that I wanted to be like him. He was a big role model for me,” she said.

She said the only person to have a bigger influence on her career is her mother, Alice.

“My mom’s probably the most competitive person I know,” Mason said. “And I’ve got three brothers, and every one of us played every sport there was. And I’ve always wanted to be a coach.”

Mason was just 24 years old when Somerset gave her first opportunity to be a head coach in 1991. She left Somerset for Boyle in 2003, then moved across town to Danville in 2007.

Over the years, Mason has adapted as teenagers have changed.

“You’ve got to be a players’ coach,” she said. “It’s not about you. Kids don’t care what you’ve done, they care if you care about them

“There’s no doubt in my mind that kids know I care about them.”

She still cares about winning, of course, and Danville has been doing plenty of that so far this season.

The Lady Admirals went 6-1 over the Christmas break, finishing in second place in an eight-team tournament at Corbin last week before sweeping Knott County Central, Pleasure Ridge Park, Ballard and Spencer County this week in their own event.

“These two weeks, I think, have got us ready for the rest of the season,” she said.

Danville played stifling defense Wednesday at the start of the final game of its six-team event, taking a 17-2 lead over Spencer County in the first quarter en route to a 63-48 win.

The Lady Admirals return to 12th Region play Monday at Casey County, then open their 45th District schedule with back-to-back games Jan. 6 at Danville Christian and Jan. 7 against Garrard County.

Mason’s goals for her veteran team include competing for All “A” Classic and 12th Region titles.

“We’ve been building for this team for three years,” she said. “We’ve lost in the semifinals of the region three years in a row … so hopefully the basketball gods will be on our side if we keep working hard.”

Winning is the goal, but Mason said the games aren’t the best part of the job for her.

“I still enjoy this,” she said. “The day that I don’t enjoy coming to practice is the day I’ll give it up, because the practices, the bus rides, the locker room and the relationships is what I’ll miss more than anything.

“I love it here, and I don’t know how much longer I’ll do it, but as long as I’m enjoying it I might as well do it.”