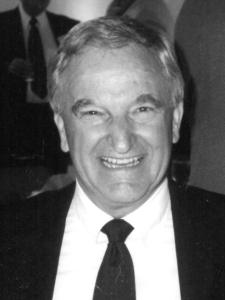 Gerald Lloyd Atkinson, age 90, of Danville, Kentucky, passed away peacefully at home surrounded by his loving family, on Sunday, December 19, 2021. Dr. Atkinson and his wife, Arvie, had recently moved from their home of nearly 50 years in Camp Springs, MD, a suburb of Washington, DC, to live two doors down from their youngest daughter, Julie Graham, of Danville. Dr.

Atkinson was a decorated U.S. Navy carrier-based aviator (CDR USN (Ret.)) who flew the RA5C ‘Vigilante’, a tactical reconnaissance aircraft, in combat missions over North Vietnam and in the Paris Air Show in 1965. Dr. Atkinson earned degrees from Central Michigan University, the Naval Postgraduate School in Monterey, CA; and the University of Michigan, where he was awarded his Ph.D. in Nuclear Engineering. The latter prepared him to again serve his country as a negotiator with the Soviets for the Strategic Arms Limitation Talks (SALT) in Switzerland. He was an assistant professor of computer science, teaching master’s degree candidates artificial intelligence at the Naval Air Test Center at Patuxent River Naval Air Station where he earlier attended Navy Test Pilot School and was named top test pilot in his graduating class that year. He later authored a book, From Trust to Terror, and was creator, editor, and publisher of Eternal Vigilance: A Journal of American Culture, from 2000-2008. Dr. Atkinson was awarded the Legion of Merit, the Distinguished Flying Cross, Air Medal (4 Stars), and the Navy Commendation Medal with Combat V. He was born in Flint, Michigan, raised in Davison, Michigan, and is a graduate of Davison High School where he was inducted into the Hall of Fame in 2000.

A funeral mass will be held at Saints Peter and Paul Catholic Church, Danville, Kentucky, Friday, January 7, 2022, at noon with visitation at 10:00 a.m. He will be buried at Arlington National Cemetery at a later date. In lieu of flowers, donations can be made in his honor to Heritage Hospice, Inc., P.O. Box 1213, Danville, KY, 40423. Please sign the online guestbook and send a Hugs from Home at www.stithcares.com.