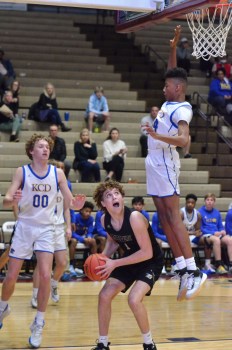 Jakei Tarter of Boyle County fakes out Kentucky Country Day defender Cam Edwards, right, as he looks for a shot during the first quarter Thursday. - Photo by Mike Marsee 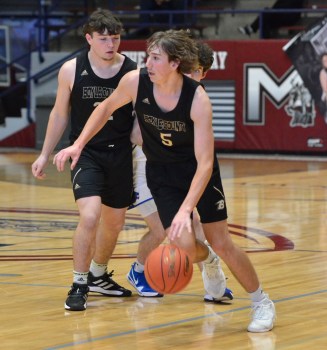 Kason Myers (5) of Boyle County dribbles around a screen set by teammate Dalton Stone during the second quarter Thursday. - Photo by Mike Marsee 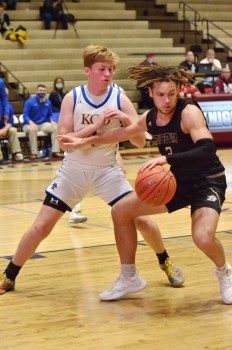 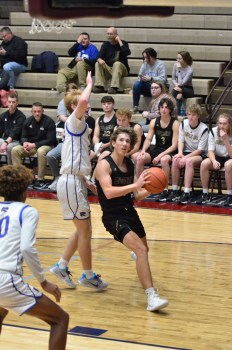 LEBANON — The Boyle County boys were as busy as any other basketball team during the holidays, and they aren’t about to get a break now.

The Rebels got a great deal of work done over the two-week Christmas break, but coach Dennie Webb said there is still much to do as they enter a more hectic portion of their schedule.

Boyle showed signs of progress last week in a tournament at Marion County, where it took third place with a 67-53 victory over Kentucky Country Day on Thursday, and Webb said he is confident that progress will continue in the coming weeks.

“We’re going to get there,” Webb said. “We’ve got things we need to work on, which is all right. We’ll work on them.”

The Rebels will have to work around a busy schedule that will see them play six games in a 12-day stretch that begins with their 45th District opener Tuesday night at Garrard County.

They got two days off after their final game at Marion, but that isn’t likely to happen again for some time.

“(We wanted to) give them a couple days’ rest and then get ready for a really busy January,” Webb said. “I told them days off after this weekend are going to be few and far between.”

Boyle (9-2) had a nine-day layoff before the Central Kentucky Christmas Invitational last week.

“We had a few good days of practice, we got people in shape a little bit better, then we also got to work on some of those offensive things we needed to,” Webb said.

Inconsistency on offense has been an issue for the Rebels, who returned two starters from the team that won the 12th Region last season and were without one of them for much of last week.

Guard Hagan Webb suffered an ankle injury in the Rebels’ 81-59 loss to John Hardin in their first game at Marion on Dec. 28.

He played only briefly later that day in a 57-46 win over Marion before his injury forced him to the bench, and he sat out the KCD game two days later.

“We’ve got a lot of new faces that are playing a lot of big minutes, so we’ve got to get them acclimated to what we want to do and how we want to play, and then also get them to play with a little bit of confidence and swagger, too.”

That swagger may come with improvement on offense. Boyle has been stingy on defense, allowing just 52.6 points per game, but its offense is averaging only 58.5 points, down from 66.0 last season.

“Our defense is pretty good most of the time, it’s just that offensively teams are doing some things to us that we hadn’t seen,” Webb said. “We’ve got a lot of guys back, but a lot of these guys are inexperienced.”

As an example, some of the zone defenses the Rebels faced last week were new to many of them, including the 2-3 employed by KCD (7-6).

Even so, Boyle shot 59 percent in the second half and 51 percent overall from the field to pull away from the Bearcats.

The Rebels scored the first 12 points of the game and were up 15-3 before KCD scored 12 straight points. Their lead was just 32-28 early in the second half before they scored 10 straight points to gain some breathing room.

Luke Imfeld led Boyle with 20 points, and he had 67 points in the team’s three contested games at Marion. (The Rebels got an additional win by forfeit when duPont Manual was forced to withdraw due to COVID-19 issues within its program.)

Jakei Tarter and Kason Myers had 11 points each and William Carr added 10 for the Rebels. Tarter had nine rebounds and Cruise Wilson had eight to help Boyle outrebound KCD 34-17.

Following the game at Garrard, Boyle hosts Wayne County on Friday and plays Paintsville on Saturday at Lincoln County in a rematch of the Rebels’ 70-56 victory in the first round of last year’s Boys Sweet 16.