STATE OF THE COMMONWEALTH
Beshear says Kentucky and Kentuckians are strong 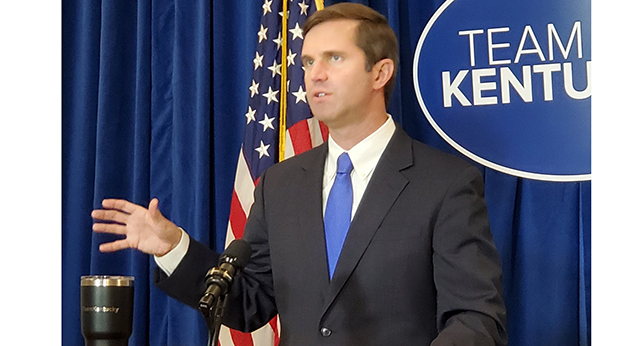 Gov. Andy Beshear gave his third State of the Commonwealth address, noting this year’s speech feels both the toughest – as the state faced the most deadly tornado outbreak, numerous natural disasters, and a worldwide pandemic – and the most exciting, because of the state’s record-breaking job growth and economic investments.

The governor said, even though these losses and the pain we carry from them, the state of our commonwealth is strong and Kentucky is ready to move forward as a leader in the post-COVID economy.

“Our commonwealth is strong because we are strong,” Gov. Beshear said. “In Kentucky, we are good people, tough people, resilient people. We care deeply for one another. And while they may knock us down, no tornado, no pandemic, no flood, no ice storm can break us. Because we do not break.”

The governor said record economic growth, tens of thousands of new good-paying jobs and numerous major companies betting their futures on Kentucky and our workforce prove that “our time is here and our future is now.” Kentucky is no longer a “flyover state,” but rather a destination. The Governor urged lawmakers to set partisanship aside and spend the session moving the state forward by investing in our people and communities so we can continue our momentum and turn two years of great progress into 20 years of real prosperity.

Tornado Response
In his speech, Gov. Beshear first addressed the most recent challenges and tragedies affecting Kentucky families. He noted last year was bookended by natural disasters: devastating ice storms and historic flooding in January and February, and the deadly tornado in December, which was also followed by more destructive storms on New Year’s Day.

The governor discussed visiting impacted communities, including Ashland, Beattyville, Nicholas County, and other counties, as well as communities shaken by the deadly tornadoes, including Mayfield, Bremen, Dawson Springs, and Taylor County.

The governor highlighted the strength and heroism of Kentuckians in stories he shared about the tragic night the tornadoes struck Western Kentucky. He introduced and thanked Nevin Price, a farmer in Taylor County, who pulled multiple neighbors from the basements of their collapsed homes, clearing away enough debris to pull them out. The governor also thanked Jeremy Creason, chief of the fire department in Mayfield, who was among the first on the scene after a tornado leveled the candle factory with dozens of workers inside.

One of the hardest-hit places Gov. Beshear toured was his father’s hometown of Dawson Springs. Seventeen people from the small town were killed.

“My faith teaches me that while we struggle to understand the whys of human suffering, we can see God’s presence in the response,” the Governor said. “And Scripture tells us: ‘Bear one another’s burdens, and so fulfill the law of Christ.’”

The strength of Kentuckians also stood out through donations to help with the recovery. The Governor thanked those who donated money, time, food, shoes, and blood, as well as those who gave toys to First Lady Britainy Beshear’s Christmas toy drive.

Gov. Beshear introduced Kara McKnight, who was in attendance with her parents, Ashley and Jason, and her brother, Jett. The First Family met Kara at a Christmas celebration at Pennyrile State Park. She had a tough month, losing her older brother around Thanksgiving and her house in the tornado. The Governor and his daughter, Lila, filled Kara’s arms with games and toys.

“And then she began to laugh,” Gov. Beshear said, “an amazing, special laugh I will always remember: A laugh that reminded me that even in the darkness, there is wonderful, pure, joyful light.”

Gov. Beshear said the courage and compassion Kentuckians have shown during this time make him proud to be Kentucky’s Governor and let him know that we – as Team Kentucky – have what it takes to meet this challenge.

To help those affected by the storms, the governor announced he is working with members of the House and Senate to fast-track legislation that would direct $150 million to help communities rebuild and another $50 million to help the region’s schools recover and get them ready to provide the best possible education to their students. It also would provide additional tools to bring and keep jobs in these communities.

“I want every family and community touched by these storms to know that I am with you, the General Assembly is with you, and the Commonwealth of Kentucky is with you, today, tomorrow and however long it takes,” the Governor said.

COVID-19 Response
Assessing the state of our commonwealth also requires addressing the ongoing COVID-19 pandemic, Gov. Beshear said. We have now lost more than 12,000 of our fellow Kentuckians to the virus.

This week, it was reported that the omicron variant has led to the highest one-day count of new cases and the highest one-day positivity rate. Even with new concerns, the Governor said Kentuckians have continued to take a leading role in this fight, as they have since the first vaccines were delivered in December 2020.

With the help of partners like Kroger and Gravity Diagnostics, the Governor’s administration built testing and vaccine protocols that have become national models.

“We’ve built the most robust testing and vaccination networks in human history. It was called the greatest logistics challenge since World War II, and we got it done,” Gov. Beshear said. “Over 62 percent of every man, woman, and child in the commonwealth have been vaccinated – something that has never been done before.”

The governor urged everyone eligible to get a vaccine and a booster and asked Kentuckians to take pride in the fact that our vaccination rate has consistently been in the top three in our region and that nearly 75% of Kentuckians 18 and older have received at least their first shot of hope.

The governor noted that the commonwealth was a national leader in prioritizing educators for vaccinations, which is how Kentucky was one of the first states to return to in-person instruction in every single school district. And when children did return to school, the First Lady’s Coverings for Kids program ensured they had masks to wear to protect them as they learned.

Gov. Beshear said: “Folks, COVID is our Spanish flu – it is our plague. But we are strong enough to defeat it no matter how long it takes.”

Record-Breaking Economic Momentum
Through the many challenges of 2021, the Governor said, we never took our eye off the ball and worked every day to build a better future of our kids.

Last year, under Gov. Beshear’s leadership, the state shattered every economic development record in the books. The commonwealth attracted a record $11.2 billion in private-sector investments in 2021, and these investments will create more than 18,000 quality jobs for Kentucky families.

In September, Kentucky landed the largest single investment in state history. Spending nearly $6 billion and creating 5,000 new jobs, Ford Motor Co. and its partner, SK Innovation, are going to build the nation’s largest electric vehicle battery plants in Kentucky. The governor mentioned that Bill Ford Jr. – Ford’s executive chair and Henry Ford’s great-grandson – sat in his office and said: “Andy, this is the biggest step in the auto industry since the Model T. And this is the biggest investment Ford has ever made, and we are making it in Kentucky.”

“That’s when it hit me,” Gov. Beshear said. “Ford Motor Co. – a company that is American as America – was betting its future. And who did Ford trust enough to bet its future on? The people of the Commonwealth of Kentucky.”

Last year brought not only Ford, but companies like Pratt Industries, which is making its largest ever investment – half a billion dollars – in Henderson. This is the largest project in Western Kentucky in 25 years. Toyota also continues to believe in Kentucky, investing $461 million in electric vehicles and adding 1,400 direct, full-time jobs. GE Appliances is expanding in Louisville, showing that U.S. manufacturing is back. In October, the company announced a $450 million investment and 1,000 new jobs in Kentucky.

Amazon operationalized its new $1.5 billion Air Hub, creating 2,000 jobs in Northern Kentucky. Ahlstrom-Munksjo, which manufactures fiber-based materials, located a second facility in Madisonville with a $70 million investment that will create more than 50 jobs. And Fidelity Investments in Covington, which was already one of Northern Kentucky’s largest employers, announced 600 new professional jobs this summer.

Firestone Industrial Products is creating 250 jobs in Whitley County with a $50 million investment.

The governor noted growth in emerging industries like agritech, with AppHarvest announcing expansions in Morehead, Somerset, Berea and Richmond, in addition to the company’s 2.7 million-square-foot flagship facility. AppleAtcha launched last summer and is expected to create 2,000 full-time jobs in Inez, in addition to seasonal jobs. Fresh Harvest continues to grow in Stanford, and Enviroflight is thriving in Maysville.

Other high-tech companies have made great strides, including Rajant in Morehead, which expanded its mesh telecommunications system, and Novelis, which opened its first new facility since 1982, investing over $300 million in Todd County.

Kentucky was already the worldwide leader in bourbon production, and the Governor said 2021 saw the industry continue to expand, both in production and in tourism. Gov. Beshear thanked Secretary of Commerce Gina Raimondo, with whom he worked to successfully remove harmful bourbon tariffs and ensure a bright future for a signature industry.

The governor said that every region of the state will share in the coming prosperity, including the regions and the neighborhoods that are far too often left out. He highlighted one of his favorite stories and talked about traveling to Beattyville to welcome Lion First Responder, which manufactures firefighter PPE, back to the community, to the same building they left in 2010.

Moving Forward
After the trials of the year and record economic investment, Gov. Beshear said he is convinced the role of government is not to move the state right or left, but to move it forward. He said his budget proposal, which he will unveil Thursday, Jan. 13, at 7 p.m. EST, will focus on doing just that.

Gov. Beshear said his budget will make historic investments in education, create a new fund for investing in economic development sites and invest in essential workers, like the Kentucky State Police, state employees, nurses, and teachers. Gov. Beshear’s budget will ensure that Kentucky remains a leader in agritech and builds upon our pharmaceutical footprint in Northern Kentucky. His budget proposal would continue to invest in infrastructure, with more water and sewer grants, roads and bridges, and will include funding to move the state closer to constructing a Brent Spence companion bridge without tolls.

The governor noted these words of wisdom from President Abraham Lincoln: “You cannot escape the responsibility of tomorrow by evading it today.”

And the Governor continued by saying that we have been called to be better people, referencing the trials we have faced, and said that now is the time to put partisanship aside and to spend this legislative session focused on improving the lives of our people.

The governor said, “Scripture further guides us: ‘Let us not become weary of doing good, for at the proper time we will reap a harvest if we do not give up.’”

Gov. Beshear concluded: “We are too strong to give up. We must go forward. Our time is here. Our future is now.”