Washington says Tshiebwe is ‘super funny’ off the court 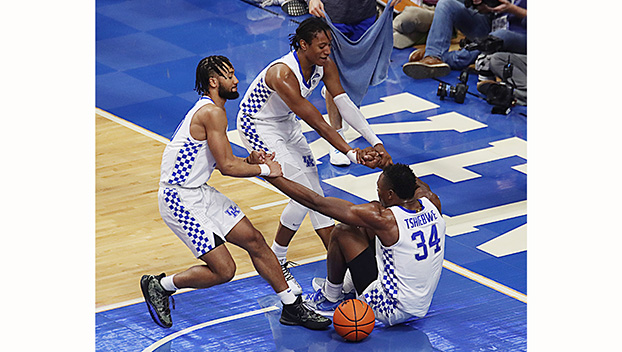 Kentucky Wildcats guards Davion Mintz and TyTy Washington Jr. help teammate Oscar Tshiebwe (34) off the floor in the Wildcats’ game against Western Kentucky. Washington describes Tshiebwe as “really funny” and added that he even does an impression of UK coach John Calipari. - Photo by Jeff Moreland

On the basketball court, Oscar Tshiebwe is a rebounding machine with a non-stop motor. But what is he like off the court?

“Oscar is super funny. He is like the friendly giant at the end of the day,” UK freshman guard TyTy Washington said. “He is super friendly.

“Every time we go out, Oscar is always making new friends. I don’t know how he does it but he always does.

On the court, he is a different type of animal.”

Washington says Tshiebwe can even do a funny John Calipari impersonation that players enjoy.

“We both have fun,” Washington said.

Tshiebwe has tried to teach Washington how to speak French without a lot of luck.

“It’s just hard not to have fun when you are around Oscar,” Washington said.