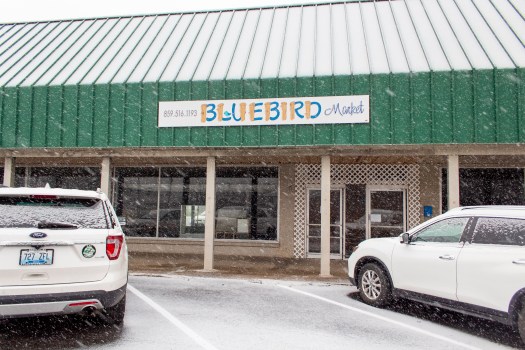 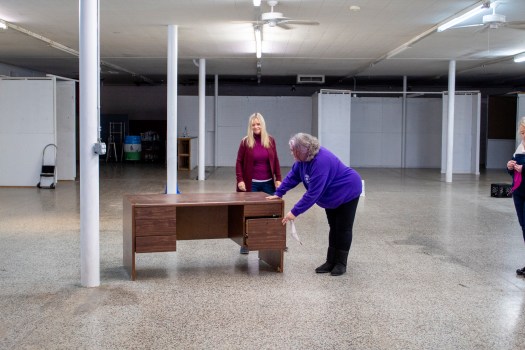 In the now mostly-empty space, Blue Bird Director Beth Marlowe moves a desk they’ve had since she’s been there. - Photo by Fiona Morgan 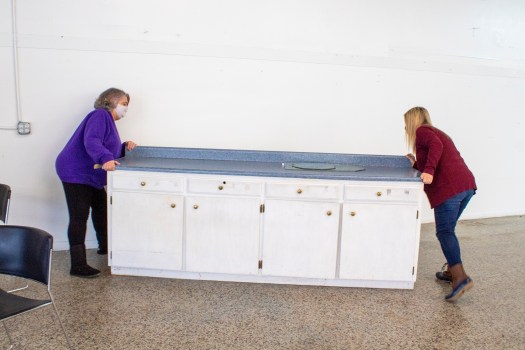 Thrift store Blue Bird Market closed its doors in December after the owners of their leased building sold the unit.

Part of the Greenleaf shopping center, the non-profit store found out the day before Thanksgiving that they had to move out of the building by Jan. 15.

The unit used to be a grocery store owned by the Richardson family several decades ago. Since then, other units were built along the building, turning it into a shopping center. The family had been trying to sell their unit for two to three years.

Blue Bird Market moved there in the summer of 2020, opening Aug. 1 after the COVID-19 lockdown. Blue Bird Director Beth Marlowe said they made an agreement with the Richardsons to pay reduced rent, knowing that they were hoping to sell the building.

“[Moving out] was incredibly unexpected, but nothing that we didn’t know could happen; we just didn’t think it would ever happen,” Marlowe explained. “We’re so thankful to them for allowing us to be there in the first place.”

The Richardson family said they offered to sell the unit to Blue Bird Market at a reduced price, but the sale fell through.

Marlowe and the many volunteers of Blue Bird Market fixed up and painted the space when they moved in.

“It was absolutely perfect for us, so it’s a little bit devastating,” Marlowe said.
Blue Bird helps fund Wilderness Trace Development Center, a preschool for children with autism, cerebral palsy, Down’s Syndrome, hearing and visual disabilities, and other disabilities. They also serve children without disabilities.

The past few years, Blue Bird has provided a large chunk of its funding. From January to December 2021, they raised over $170,000 for Wilderness Trace. That amount is almost double what they made before moving to Greenleaf shopping center.

Opening in 2011, the store was originally in a larger stand-alone building on the Danville bypass. They did not have to pay rent, but the building had some problems, and did not have heat or air conditioning.

After the building’s electricity shut off during the pandemic lockdown, the store closed down for a month. In that time, Marlowe said they realized the building wasn’t usable for them anymore, and they needed a new space.

Marlowe said that at the time, the Greenleaf shopping center did not have much business, but that several businesses have opened up since Blue Bird moved there.

“Blue Bird has brought a lot of life back into Greenleaf shopping center and that area,” Marlowe said. “We would hear weekly from people who live in Green Acres saying ‘we’re just so happy you’re here on this side of town’ and ‘this is so great.’”

Blue Bird was not only a store, Marlowe explained. They held some events and social gatherings, and volunteers and regulars saw the place as a community. People came to socialize and have family time as much as they were there to shop.

Marlowe got to know numerous regulars over the seven years that she’s worked there, learning about their struggles, successes, and daily life.

Volunteers came from all circles and walks of life. On any given day, Blue Bird had an average of eight volunteers, but Marlowe said sometimes they had so many people who wanted to help that they wouldn’t have jobs for everyone. They had hundreds of volunteer hours throughout the year.

“Volunteers have taken such ownership of it; it’s going to affect a lot more than just the money at Wilderness Trace, and that’s what breaks my heart,” Marlowe said.

Some volunteers come from churches and groups like the girl scouts; others are people from the community who are retired and looking for something to do; others just enjoy decorating and arranging furniture. But they all come to believe in their mission, Marlowe said.

One program brings groups of adults with special needs to volunteer. Marlowe said one man with a vision disability loved to come every week to ring the bell whenever a customer decided to round up their order to donate a little extra.

Blue Bird takes volunteers as young as in middle school. A little girl who Marlowe sees shopping with her parents has been asking her if she can volunteer since second grade. Now in fifth grade, the girl is devastated that the store is closing just before she can volunteer.

The store currently does not have any viable places to move. Without opening back up soon, Wilderness Trace may lose funding for some programs.

“We’ve got to get Blue Bird back to be able to keep Wilderness Trace afloat,” Marlowe said.

Wilderness Trace is one of few schools that serves both typical kids and non-typical kids. Marlowe loves this aspect because it allows children to become accustomed to being friends with people different from them.

“Their best friend is in a wheelchair and they don’t even see that as different,” Marlowe said. “To me personally, that’s the biggest mission we have, because you see these friendships and kids who are never going to walk into a school and feel the need to look at someone weird or judge them weird, because their best friend was like that when they were in preschool.”

She continued, “It’s just such a beautiful place and I can’t imagine having to change funding where we are not allowed to do what our mission is.”

Marlowe said they are looking for another similar place to the current spot. With around 10,000 square feet now, they are willing to downsize to around 8-9,000 square feet.

She said they are not too picky right now, but would ideally like a place with a loading dock, as it has helped their pick-up volunteers tremendously. In the old building, they had to fit every piece of furniture through a normal-sized door.

Visibility from a major road has improved their business two-fold. Before Greenleaf, they made around $1500-1800 a week, which then almost doubled.

When they moved to Greenleaf, they had brought furniture, knick-knacks, and books. Now, they are giving away all knick-knacks, books, kitchenware, etc. to other non-profits, and only keeping shelving units and carts that they will need when they reopen.

Without a place to go, they are keeping that small number of things in a storage unit, and giving away everything else to people who give any donation to Wilderness Trace. They plan to start fresh from all new donations.

Marlowe said anyone who might have a place for them to move can email her at beth.marlowe@bgcap.org, call the Blue Bird cell phone, 859-516-1193, or send their Facebook page a message.

Information provided by the property owners of Blue Bird Market’s building made it necessary to make updates to the online version of this story.