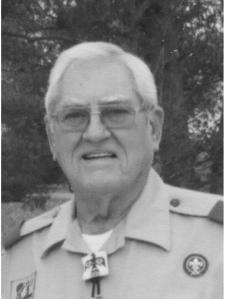 Daniel Collier Elkin, Jr., 94, of Danville, passed away January 10, 2022 in Danville, Ky. He was born in Atlanta, Georgia, on October 8, 1927 to the late Daniel, Sr. and Helen McCarty Elkin. He grew up in Atlanta but spent summers with his grandfather at the Elkin family farm in Garrard County, which came to be his home. A veteran of the United States Navy and a graduate of the University of Virginia, Dan was a postal employee for over 30 years in Garrard County, where he also operated a family farm and served for many years in the Volunteer Fire Department. One of his greatest joys was service, for more than 50 years, with the Boy Scouts of America. He was the scoutmaster for the troop in Garrard County, whose racial integration he supervised, and he led his scouts to many National Jamborees and to the Philmont Scout Ranch. He received many regional and national Scouting awards, including the Silver Beaver, the Order of the Arrow, the District Award of Merit, and the Scouters Key. He treasured his friendships with former Scouts and Scoutmasters throughout his life. Dan loved to play golf and bridge with his many friends. An animal lover, he was an expert horseman as a young man, and no account of his life could fail to mention the many dogs he loved over the years: Whiskey, Sweetie, Little Bit, Digby, and Gracie, among many others. He was a member of the Lancaster Christian Church. A devoted father, he leaves his three children with fond memories of golf, horseback riding, night-swimming at Dix River, sledding on the snowy hills of the Elkin family farm, and playing in the surf at Pawleys Island, South Carolina (some of his grandchildren simply called him “Grandpa Beach”). Everyone who knew Dan will remember above all the big, warm smile he shared generously, right up to the end of his life. He is survived by his wife, Mary Lou Bean Elkin. He had a winning way with all young people and took particular delight in his own children, grandchildren, and great-grandchildren: Robert Elkin of Ohio, Daniel Elkin, III (Ann) of Midway, and Elizabeth Grammer (John) of Tennessee; stepson James Douglas Bean (Suzanne) of Lancaster, stepdaughter, Jayne Bean Hunstad (Nels) of Lancaster; grandchildren Robby Elkin, McCarty Elkin, Amanda Elkin, Daniel Elkin IV, Zoe Grammer, Jessie Grammer, and John Grammer; step-grandchildren Logan Greene, Tyler Greene, Kayleigh Hunstad, Chapman Bean and Whitney Bean; great-granddaughter Adeline Elkin, and step-great-grandson Bowen Fox Greene. A private family graveside service will be Friday, January 14, 2022 at Lancaster Cemetery. A public visitation will be from 5-8pm Thursday, January 13, 2022 at Spurlin Funeral Home. Pallbearers will be his grandsons. A last word can go to one of his former scouts, who wrote him not long ago to say this: “Looking back now, at age 65, I think there is no other person (except parents) who influenced me in such a positive way as YOU. Of course in Boy Scouts I learned the Oath & Law, but you were always the living example, the role model. You lived and modeled them.” For 94 years, he did just that. Memorial donations in Daniel’s honor can be made to Garrard County Animal Shelter or Salvation Army. www.spurlinfuneralhomelancaster.com