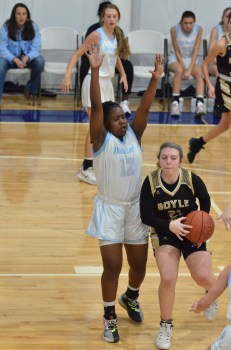 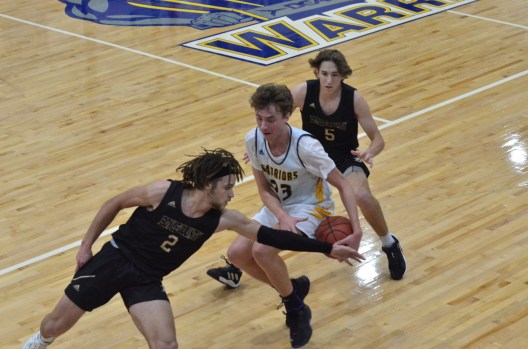 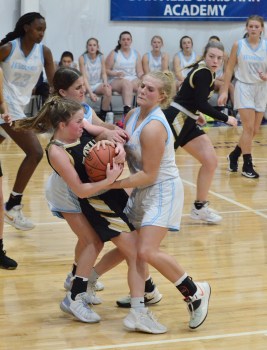 Braxtyn Heck, right, and Tristen Himes, back left, of Danville Christian battle Boyle County’s Zoe Robbins for control of the ball during the third quarter Tuesday. - Photo by Mike Marsee

Defense is driving the Danville Christian girls to places they have never been before.

The Lady Warriors are putting together one of the best seasons in school history, largely by keeping other teams from putting the ball in the basket.

In a two-night stretch, they picked up their first district win of the season, reached the finals of the 12th Region All “A” Classic for the first time and matched the longest winning streak in program history.

DCA defeated Boyle County 48-35 in its 45th District opener Tuesday, then edged Somerset 48-46 24 hours later in the semifinals of the All “A” regional.

The Lady Warriors are allowing about 10 fewer points per game than they did a season ago, and coach Billy Inmon said better team speed has allowed them to play better defense.

“We’re faster,” Inmon said. “We played a lot of zone last year, and we played just a little bit of zone for the first time (Tuesday) just to change things up because we were trying to keep (Boyle) out of the paint. But for the most part we play a much different style of defense.”

The Lady Warriors have extended their defense in part by getting freshman center Grace Mbugua away from the basket when necessary.

“We’re way out on people. We can get in their grill. And we can do that because even though Grace is 6-4, she can guard anybody,” Inmon said.

Mbugua is one of four returning starters — her sister Ruth, the only senior on last season’s 7-10 team, now plays for Division II Carson-Newman — who have helped DCA equal its longest winning streak ever at seven games.

“Our goal is to glorify God with our effort and our attitude, and when you do those two things, the wins kind of take care of themselves,” Inmon said.

Inmon said the Lady Warriors have benefitted not only from experience, but also from being so close to each other for so long.

“We’ve gotten really tight as a team,” the coach said. “They’re all great Christian young ladies, and they really like each other. One of my biggest things is stopping them from talking, visiting with each other before and during practice. … They just love being around each other.”

The team’s top threat is Mbugua, who scored 29 points Wednesday in the win over Somerset and had 16 points and 13 rebounds against Boyle for her third straight double-double.

She entered Wednesday’s game with a string of three straight double-doubles and averages of 14.7 points and 13.5 rebounds, the latter of which ranked her second in the state in rebounds.

She secured her collegiate future in September when she accepted a scholarship offer from Liberty.

“It’s the first time in 35 years the Liberty coach had committed to a kid before her freshman season, and she made national news in Kenya because she’s only the second girl ever to commit to play Division I basketball,” Inmon said.

Mbugua scored four points and Esther Kwagala scored two to help DCA hold off host Somerset down the stretch after the Lady Jumpers had pulled to within 41-40.

The Lady Warriors will return to Somerset on Friday for the All “A” regional championship game against Danville (12-2), which is seeking to reach the statewide small-school tournament for the 10th consecutiive year.

On Tuesday, host DCA held Boyle to 22 percent and shot 44 percent, well above its own season average of 31 percent.

“I really felt like a lot of that had to do with shot selection,” Inmon said. “I felt like we were a little more patient than we had been in some of the other games.”

The Lady Warriors also outrebounded the Lady Rebels 38-25, including 17-5 in the fourth quarter.

Tristen Himes scored eight points for DCA, which defeated Boyle for the second time in as many seasons.

It was the fifth loss in six games this season for Boyle (7-8), which ranks No. 2 in the region in team defense behind DCA at 46.0 points allowed per game.

Defense fueled Boyle’s rally from a 32-16 deficit in the third quarter to within 36-29 early in the fourth.

“We’ve been very good on that side of the ball,” Boyle coach Ryan Wiersma said. “Our defense has gotten better throughout the year.

We’re learning what our roles are and how to execute and what we’re looking for as a team.”

Peyton Bugg scored 18 points and is averaging 14.9 for the Lady Rebels, who dressed only nine players. Sophomore Andy Glasscock, freshman Kennedy Bugg and eighth-grader Braylee Leffew are out with injuries, and fifth-year senior Emily Glasscock left school after the fall semester to enroll at East Tennessee State, where she will play softball.

Boys
Boyle County 57, Danville Christian 47
Boyle (11-2) overcame its own poor shooting to fight off DCA in the fourth quarter to win its 45th District opener.

The visiting Rebels shot just 29 percent in the second half and 32 percent overall from the field, and they saw a 12-point lead trimmed to four in only about 90 seconds when the Warriors pulled within 47-43 with 2:29 remaining.

It was 51-47 in the final minute before Boyle sealed its win with two free throws each by Luke Imfeld, Hagan Webb, and Kason Myers.

“It was another fortunate win,” Boyle coach Dennie Webb said. “We played ugly … and did just enough, but those are fun games.”

Imfeld went 5 for 11 from 3-point range and had a game-high 24 points and a team-high seven rebounds for Boyle. Hagan Webb, returning from an ankle injury that sidelined him for two weeks, had 10 points.

Titus Boyd scored 18 points and Xavier Yamo had 10 points and 10 rebounds for DCA.

“They’re an upcoming team and they played really, really well,” Dennie Webb said. “We’ve tried to tell them every game from here on out is huge, especially these district games, because our district is loaded. This district is the toughest district in the region, hands down, I believe.”

DCA edges Somerset in All “A” play
Danville Christian 54
Somerset 52
One night after its 11-game winning streak was snapped, DCA (13-3) bounced back to beat Somerset in a 12th Region All “A” Classic semifinal.

Boyd scored 19 points and Yamo had 15 rebounds for the Warriors, who advanced to the All “A” regional final for the first time. They will play Danville (10-6) in the championship game Friday at Somerset.