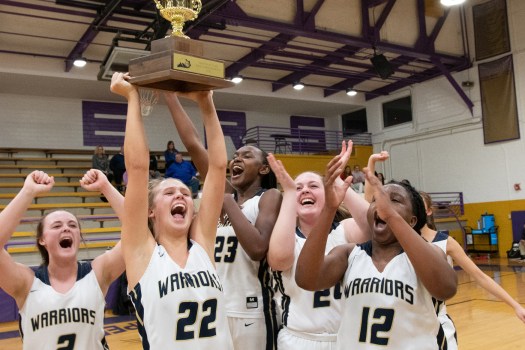 Danville Christian girls players raise their trophy following their victory over Danville in the 12th Region All “A” Classic championship game Friday. - Photo by Chris Zollner 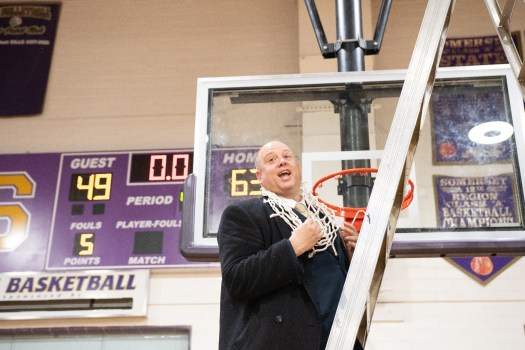 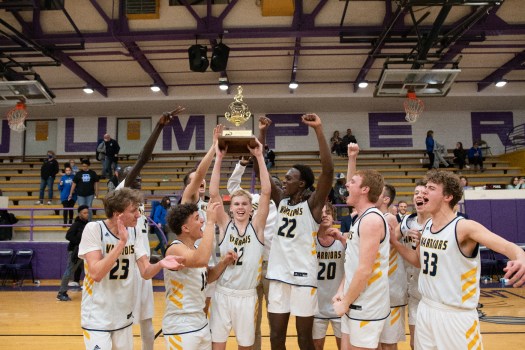 Danville Christian boys players raise their trophy following their victory over Danville in the 12th Region All “A” Classic championship game Friday. - Photo by Chris Zollner 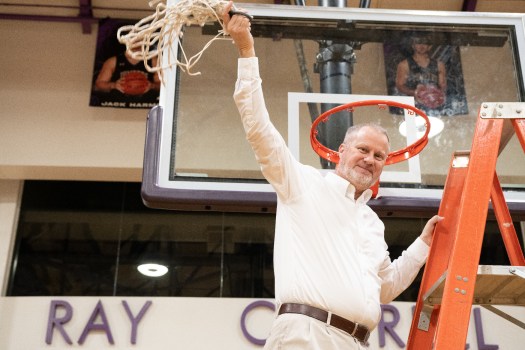 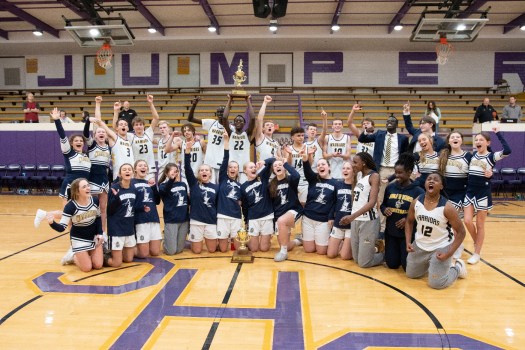 Danville Christian boys and girls players and cheerleaders pose for a photo as they celebrate the teams’ victories over Danville in the 12th Region All “A” Classic championship games Friday. - Photo by Chris Zollner

Firsts are coming fast these days for the Danville Christian basketball teams, and a historic night in Somerset earned them the opportunity to enjoy at least one more this season.

The DCA boys and girls will compete in the All “A” Classic for the first time later this month after both teams won regional championships in the small-school tournament Friday.

Both teams won those titles by defeating Danville for the first time in school history, and both teams came from behind to do so in the championship games of the 12th Region All “A” Classic at Somerset.

First, the DCA girls rallied to edge Danville 55-51. Then, the DCA boys stormed past Danville in the fourth quarter for a 63-49 victory. Then there were trophies to hoist and nets to cut.

The Warriors and Lady Warriors claimed their spoils after earning their spots in the statewide All “A” Classic, which will be played Jan. 26-30 at Eastern Kentucky University in Richmond.

Girls
Danville Christian 55, Danville 51
DCA (14-3) scored more than twice as many points in the second half as it had in the first to upset Danville (12-3).

Grace Mbugua scored 14 points in the fourth quarter and finished with 28 points and 16 rebounds to help the Lady Warriors knock off a Danville squad that has consistently been ranked among the top teams in the 12th Region this season.

DCA trailed 26-18 at halftime but outscored Danville 37-25 over the final two periods to win for the first time in five meetings between the teams after losing the first four games in the series by an average score of 64-26.

The score was tied at 46-all when Mbugua gave DCA the lead with a three-point play. Following a Danville free throw, Esther Kwagala sank a jump shot for her only points of the game to give the Lady Warriors a 51-47 lead with 1:13 to play.

DCA’s victory extended the longest winning streak in program history to eight games, although that streak ended with a 55-54 loss to Estill County on Saturday.

The Lady Warriors lost to Danville three times in the 2020-21 season, their first year of playing a full 45th District schedule. The Lady Admirals had won the most recent meeting 62-31 in a 45th District semifinal.

Titus Boyd scored 12 of his 16 points in the fourth quarter, when the Warriors used a 20-0 run to leave the Admirals in the dust.

Xavier Yamo scored 10 points in the first quarter to stake DCA to a 21-14 lead. The Warriors clung to a 29-26 edge at halftime, but Danville rallied in the third quarter, when Jalen Dunn scored eight of his team-high 15 points, to take a 44-37 lead.

Yamo finished with 24 points and 12 rebounds, and Lual Ayiei had 12 points, 17 rebounds, and five blocked shots for the Warriors, who were 0-3 against Danville and had lost those games by an average margin of 26.7 points.

Joe Mathis of WHIR-AM/FM contributed to this story.