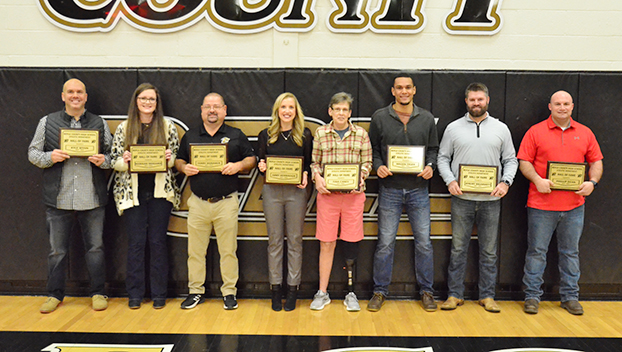 Nine new members were welcomed into the Boyle County High School Athletic Hall of Fame at an induction ceremony Friday.

The induction class of 2022 includes the coach who built a dominant football program at Boyle and three athletes who won state championships, as well as three athletes and one coach who were among the very best in their sports and a contributor who helps compile statistics for two programs.

Here is a look at the inductees.

Jeremy Brummett
Class of 2003
Brummett was a four-year letterman in football, where he played on four state championship teams; basketball, where he was a two-time district champion; and baseball.
He was a team captain as a senior in both football and baseball and an all-district player in basketball.
He has been involved in coaching all three sports at Boyle and is currently an assistant football coach and head coach of the junior varsity football team.

Tina Carey
Class of 1990
Carey was the point guard for the first girls basketball team to win a 12th Region championship and was part of three teams that won district championships. She shot 46 percent from the field and remains second in career assists with 268. She went on to play four years at Georgetown College.
She also was a shortstop for the softball team.

Phillip Dean
Class of 2006
Dean excelled in football and baseball, playing for two state championship teams and one state runner-up team in football and for one district and regional championship team in baseball. He stole 42 bases during his junior baseball season and finished his career with 98 steals.
He played baseball at St. Catharine College, helping his team win a United States Collegiate Athletic Association national championship in 2009. He worked in law enforcement for 12 years before becoming a teacher.

Abby Kerbaugh
Class of 2010
Kerbaugh starred in track and field and soccer, winning numerous championships in both sports.
She won an indoor state track championship in the 1,500-meter run in 2007 and earned first team all-state honors four times. She set school records in the 1,600 and 3,200 and was part of 4×800 relay teams that won regional championships in 2008 and ’09.
She was a four-year starter in soccer, where she received all-state honorable mention as a junior and was the district tournament most valuable player as a sophomore. She was named to three academic all-state teams, three all-region teams and three all-district teams. She lettered for four years at Denison University, helping her team win a North Coast Athletic Conference championship and reach the quarterfinals of the NCAA Division III tournament in 2010.

Hannah Miniard
Class of 2013
Miniard helped the Boyle softball team win its first two 12th Region championships, pitching for teams that finished third at the state tournament in 2012 and fourth in ’13. She was the most valuable player at the regional tournament, a member of the all-state tournament team and the recipient of numerous all-district, all-area, all-region, all-state and academic all-state honors.
She played in the Kentucky Softball Coaches Association East-West all-star games as a junior and senior and went on to play one season at Western Kentucky University, throwing a no-hitter against UT Arlington and averaging 7.57 strikeouts per seven innings in 2014.

Chuck Smith
Coach
Smith turned a struggling football program into a perennial contender in a few short years and went on to lead Boyle to six state championships and two other appearances in the state finals in 19 seasons.
He led the program from 1992 to 2004 before leaving to coach linebackers at the University of Kentucky, where he had lettered at that position from 1978-80. He returned to Boyle in 2014 and coached for another six seasons.
He is the school’s all-time wins leader with a 212-44 record.

Hagen Tyler
Class of 2015
Tyler led the boys’ basketball team to a 12th Region championship and the semifinals of the Boys Sweet 16 to cap a stellar four-year career in which he also was part of two teams that won district titles. As a senior, he averaged 21.5 points per game and shot 50 percent from the field and 83 percent from the free throw line, and he was named the 12th Region Player of the Year and a Mr. Basketball finalist.
He went on to play for four years at Campbellsville University, where he ended his career ranked fourth in scoring with 1,951 points and first in 3-point goals. He was named Mid-South Conference Freshman of the Year, made the all-MSC second team as a sophomore and the first team as a junior and senior and was an NAIA All-America honorable mention selection as a senior. He also won the 3-point shooting contest at the NAIA national tournament in 2019.
He is currently an assistant coach at Taylor County.

Kyle Wynn
Coach
Wynn led the Boyle baseball program from 2012 to 2019, winning two 12th Region championships and three district titles and leading the 2018 team to the quarterfinals of the state tournament. He compiled a 161-109 record in eight seasons.
He was named The Advocate-Messenger Area Coach of the Year for three straight years from 2016-18. He coached 19 players who went on to play college baseball, including four all-state players and six East-West all-stars.
He currently serves as athletic director at Boyle.