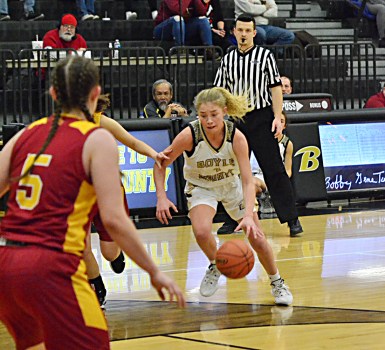 Annabelle Tarter of Boyle County drives toward the lane as Garrard County’s Addison Pevley (5) looks on during the third quarter Tuesday. - Photo by Mike Marsee 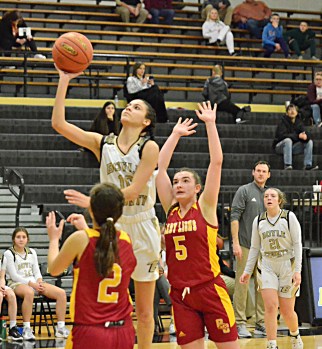 Payton Bugg of Boyle County goes up for a shot over Garrard County defenders Jaden Naylor (2) and Addison Pevley (5) during the third quarter Tuesday. - Photo by Mike Marsee 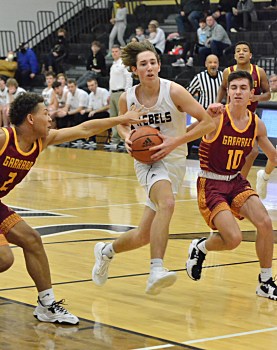 Kason Myers of Boyle County drives between Garrard County defenders Ian Alcorn (2) and Jaydon Noe (10) on his way to the basket during the third quarter Tuesday. - Photo by Mike Marsee 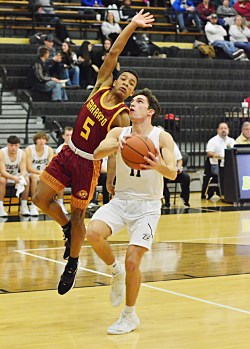 William Carr of Boyle County goes to the basket against Garrard County’s Montavin Quisenberry during the third quarter Tuesday. - Photo by Mike Marsee

The Boyle County girls played some of their best basketball just when they needed it most.

With their roster shrinking and their losing streak growing, the Lady Rebels pulled together for a victory that just might have kept their season from going off the rails.

Two weeks removed from a 30-point loss to Garrard County, they defeated the same Garrard team by 19 points Tuesday night, pulling away for a 42-23 victory that gave them a badly needed shot in the arm.

“I think it builds our confidence back up,” Boyle forward Ella Coffey said. “After a while, our confidence was at a low, and I think this definitely helps.”

Host Boyle (8-9, 1-3 45th District) had lost its last four games and was reduced to as few as seven available players due to injuries and COVID-19 protocols.

But on this night, the Lady Rebels’ execution and effort on both ends of the floor carried them to a win they could feel good about.

“It’s a great confidence boost going into the rest of the year,” Boyle coach Ryan Wiersma said. “We did a lot of things where we executed so well, and we learned. At this point in the year it’s about getting better and learning every single play and (seeing) what we can do better for the next game.”

The 49-point turnaround couldn’t have come at a better time for Boyle, which was coming off a heartbreaking loss to Lincoln County four days earlier, a 34-31 defeat in a game in which they led most of the way.

“When you lose a game like you lose on Friday, it’s easy to fall apart as a team, but this brought them together more because they knew how much each of them cared and they were willing to sacrifice that little bit extra tonight and stay patient, stay within the game, and we got better,” Wiersma said.

Boyle scored the first eight points of the game and was never headed, though Garrard (11-6, 2-1) did pull to within one point early in the second half.

Payton Bugg scored 17 points and Coffey scored 13 to lead the Lady Rebels, who shot 41 percent from the field. That was a significant improvement for a team that shot 14 percent in its 52-22 loss to Garrard on Jan. 4 in Lancaster and 25 percent during its four-game skid.

“Patience is what we’ve keyed on, and we went from having good shots to getting great shots,” Wiersma said. “We had some corner 3s … and there were some great ball reversals, and they were wide open because we were patient. We had some good looks before that, but we rushed them early in the season, but right now we’re developing that one more pass and really coming together as a team.”

Boyle was better on defense as well, holding Garrard to 21 percent shooting as the Lady Lions posted their lowest point total in three seasons.

Garrard went scoreless for the first 6:39 and managed only eight points in the first half. The Lady Lions were still within 12-11 early in the third quarter and 23-19 late in the period before the Lady Rebels scored nine straight points to go up 32-19 with 6:43 remaining.

Wiersma and Coffey said Boyle’s chemistry has been good even through the recent rough patch. So is its conditioning, which is important for a team that had only eight players in uniform Tuesday.

The Lady Rebels don’t figure to get much deeper this season, though a couple of the players who are out of action are expected to return.

Addison Pevley scored eight points and Alaya Quisenberry had seven for Garrard, which had averaged 55.5 points during a four-game winning streak that ended with this loss.

For Boyle, the process of building on this big win began Wednesday with what figured to be one of the best film sessions of the season.

“We’ll watch film tomorrow and show the great plays — there were so many that we made, both offensively and defensively — and then learn from some of the plays that we were just a little bit off or how we can do something better,” Wiersma said.

Boys
Boyle (14-2, 4-0 45th District) had a much easier time in its second meeting with Garrard (8-10, 0-3) than in its first, opening a double-digit lead in the first quarter that was never threatened en route to its seventh straight victory.

The Rebels, who had eked out a 66-65 win at Garrard on Jan. 4, played at a fast pace and got the ball to the basket often. They scored 14 points in the paint in the first quarter and 36 overall.

Boyle nullified a big night by Garrard’s Ethan Cooper, who scored 37 points to nearly double his pregame scoring average of 19.0. Cooper had 25 points in the second half.

“I thought we did a nice job defensively overall the whole game,” Webb said. “(Cooper) picked up some points there late … and he made some tough shots, and I’m all right with that. If we can make a kid take tough shots and he makes them, so be it.”

Boyle also got another big game from Luke Imfeld, who scored 40 points in the win over Garrard two weeks earlier. Imfeld had 25 points in the rematch, and he is averaging 28.2 over the Rebels’ last five games.

The Rebels shot 51 percent from the field and were 9 for 18 from 3-point range, where Imfeld was 4 for 7 and four other players also scored.

Boyle forced seven turnovers in the first quarter and scored six points off those turnovers as they opened a 17-7 lead that grew to 37-17 late in the first half.

Boyle sits atop the 45th District standings halfway through its district schedule, but the Rebels still have two games with Danville, a game at Lincoln County and a home game with Danville Christian.

Boyle’s boys and girls play at Danville on Friday.