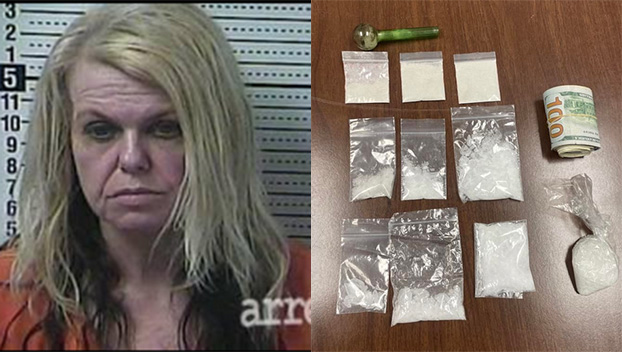 Deputies of the Boyle County Sheriff’s Office were conducting a narcotics investigation in the Junction City area. During the investigation, a deputy attempted to conduct a traffic stop on Bonta Lane. The vehicle fled heading toward Danville.

The vehicle continued into Danville, entered US-150, and headed toward Stanford. The vehicle continued into Stanford and entered a driveway on US-150 across from 78. Realizing she was at a residence she attempted to get out and rammed a Boyle County cruiser. A Lincoln County cruiser then pinned the car in and the vehicle became stuck in the mud. A brief struggle ensued with the suspect where she was quickly placed into custody.

Deputies located approximately 3 ounces of methamphetamine, approximately 10 grams of heroin, and cash. Deputies also learned that the subject had ingested heroin during the pursuit leading to an overdose. A deputy with the Lincoln County Sheriff’s Office began administering medical aid on the subject prior to the arrival of Lincoln County EMS. The subject was arrested and transported to Ephraim McDowell Regional Medical Center before being transported to the Boyle County Detention Center where she was lodged.

Sheriff Derek Robbins asked that if you have any information about drug activity or any crime to contact our office at 859-238-1123. You can remain anonymous.