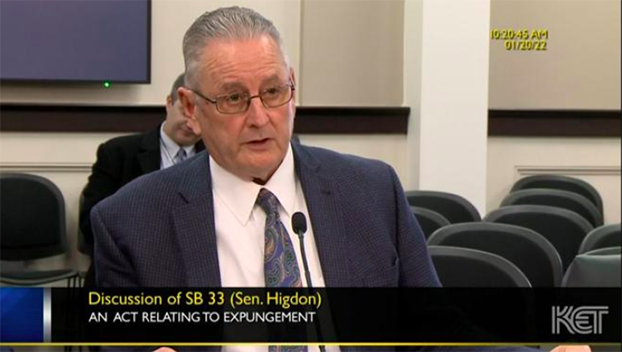 Sen. Jimmy Higdon introduced a measure that would have misdemeanors removed from the record five years after the crime.

FRANKFORT, Ky. (KT) – A bill establishing an expungement procedure for some misdemeanors, as well as one that would move incest convictions into the violent offender category, were both approved by a legislative committee on Thursday.

Sen. Jimmy Higdon, R-Lebanon, is sponsor of the measure, Senate Bill 33, which would allow for someone convicted of a misdemeanor to apply to the trial court where they were convicted to have it removed from their record, five years after the crime.

“There are about 180 misdemeanors that have no expiration, and can’t be expunged,” he testified before the Senate Judiciary Committee. “The primary reason for doing this is to enhance employment opportunities.”

Higdon pointed out several examples of crimes that fall within that category: “Violation of a stop order for buying, selling or processing eggs without a license; buying or selling mussel shells or mussels in the shell without a license.”

There would be a $100 fee that would have to accompany the expungement petition, the approval of which by the judge would not be automatic.

Higdon was the sponsor of a similar expungement bill for those convicted of non-violent felonies, which was passed by the General Assembly several years ago.

Sen. Julie Raque Adams, R-Louisville, testified on her measure, SB 38, dealing with those convicted of incest.  “All this does is include incest in the violent offender statute, which means that anybody convicted of this crime has to serve at least 85% of their sentence before becoming eligible for parole.”

She also brought two victims of incest, who Kentucky Today will not identify.  One of them testified she was a victim by her stepfather, who only served 15% of his sentence before being released on parole.  The victim asked the committee to approve the bill.

Both measures won easy passage from the Judiciary Committee, and now head to the Senate floor for consideration.