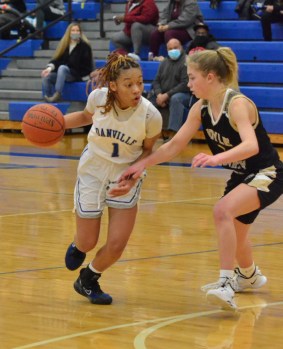 Love Mays (1) of Danville drives toward the lane against Boyle County’s Annabelle Tarter during the second quarter Friday. - Photo by Mike Marsee 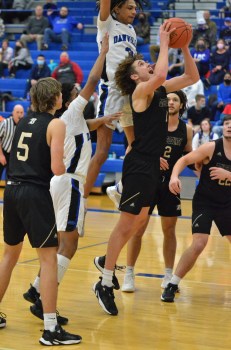 Jakei Tarter of Boyle County pulls in an offensive rebound in front of Danville’s Ontario Hill, back, and Jalen Dunn during the second quarter Friday. - Photo by Mike Marsee 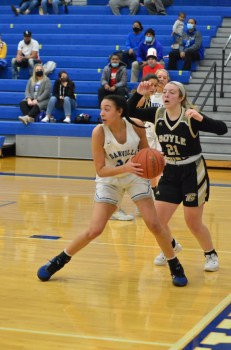 Desiree Tandy, front, of Danville looks to pass the ball out of the lane as Boyle County’s Ella Coffey defends her during the second quarter Friday. - Photo by Mike Marsee 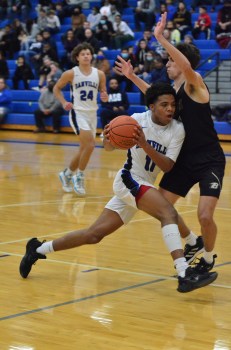 Jalen Dunn of Danville drives to the basket against Boyle County’s William Carr during the third quarter Friday. - Photo by Mike Marsee 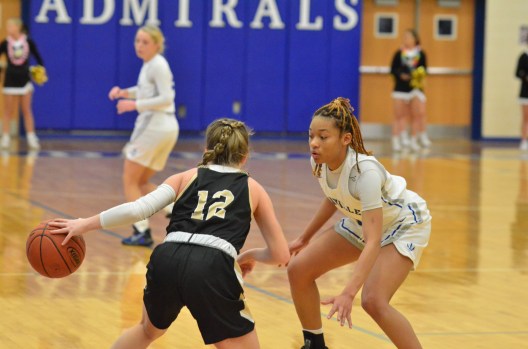 The Danville girls are playing like a team in a bad mood.

Denied the chance to compete in the All “A” Classic, the Lady Admirals have been taking out their frustrations on their district opponents by turning up their defense.

Most recently, they put the squeeze on Boyle County in a 60-36 victory Friday night.

It was the second straight one-sided win for Danville against a 45th District foe since its loss to Danville Christian — its newest district rival — in the 12th Region All “A” Classic championship.

“We’re playing as an angry team right now,” Danville coach Judie Mason said. “After (the loss to DCA) we said, ‘New season.’ We’re starting district play, and I think we’re coming out and playing like a team on a mission now.”

The Lady Admirals forced 14 first-half turnovers and led by as many as 30 points before halftime and 41 in the third quarter.

Their victory in the first of two meetings with the crosstown rival Lady Rebels came on the heels of a 62-34 win over Lincoln County three days earlier.

“The last two games, we wouldn’t have played like that if we’d have won the All ‘A’ (regional),” Mason said. “It’s defense, and that’s what got us beat in the All ‘A.’ We didn’t have the urgency to play defense and didn’t follow the game plan.

“We’ve learned from that, I hope, and if these two games are any indication, I feel like the team’s back and we’re on a mission.”

Until late January, the All “A” is the primary mission for Danville each season. The Lady Admirals might have been capable of making a deep run at the small-school tournament this week, but after they lost to DCA for the first time ever, they are shifting their focus to preparing for district and regional tournaments.

“We’ve moved on,” Mason said, “and it was hard. DCA outplayed us. They deserved it, good luck to them and we’ve got to move on. If you don’t move on, your whole season’s tanked.”

Danville easily moved toward its eighth consecutive win over Boyle by moving the ball into the paint, where Desiree Tandy scored a game-high 18 points, including 11 in the team’s 25-point second quarter.

The Lady Admirals are a solid 3-point shooting team at 33 percent, but Mason doesn’t want them to be overly reliant on perimeter shooting. Twenty-two of their 42 first-half points and 34 points in all came in the paint.

She said that worked well because of the play of Tandy and point guard Love Mays, who had 14 points and six assists.

“I thought she ran the show tonight,” Mason said of Mays. “The last two games are the best Love has played for me at point guard.”

Lara Akers added 12 points for Danville, which shot 51 percent overall from the field and went 6 for 17 from 3-point range.

The energized Rebels raced to a 17-3 lead in just over six minutes, pushing the ball up the floor and scoring seven of their first eight baskets in the paint as they alleviated their coach’s concerns about sluggishness.

“We started with high energy, which I was worried about after we didn’t have a great practice yesterday,” Boyle coach Dennie Webb said. “I was a little concerned, but we came out with great energy at the start, moved the ball well and got some easy buckets.”

The Rebels had an easy time on the boards as well, outrebounding the Admirals 45-24 and getting 17 offensive rebounds.

Jakei Tarter led Boyle on the boards with 14 rebounds, part of a double-double in which he also scored a season-high 19 points.

“Jakei’s just absolutely a monster on the boards, tonight and every night. He wreaks some havoc in there,” Webb said. “If he’s not getting one, he’s probably keeping one or two, maybe five alive.”

Luke Imfeld scored a game-high 21 points and had seven rebounds for the Rebels, who had one starter out and another whose minutes were reduced due to illness.

Danville played Boyle on even terms in the second quarter but never got closer than 10 points and fell behind 41-19 after the Rebels scored the first 12 points of the second half.

“We know we’re going to get beat a little bit on the boards … and if you can’t score, you can’t get in any kind of full-court pressure … to try to turn them over some to try to equal the possessions out that way,” Danville coach Ed McKinney said.

Offense has been hard to come by of late for the Admirals, who were held below 50 points for the third consecutive game, all losses.

“We don’t have a lot of guys that are real shot creators, and we really can’t throw it to the block because we don’t have a true post guy.

So when you can’t create your own (shots) and you don’t have a true post guy, you move the ball and move the ball but eventually somebody’s got to try to drive it or you jack up a 3,” McKinney said.

Dante Hayden scored 19 points and Jalen Dunn had 14 for Danville.

Boyle and Danville will meet again Feb. 8 at Boyle in a girls-boys doubleheader.

Danville hosts Garrard County on Tuesday night to make up a doubleheader that was postponed Jan. 7 due to winter weather. Garrard was originally scheduled for a doubleheader with DCA on Tuesday, but that has been postponed because DCA will play in the All “A” Classic later this week.