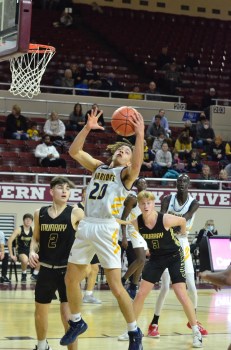 Noah Imfeld (20) of Danville Christian pulls in an offensive rebound during the second quarter Thursday. - Photo by Mike Marsee 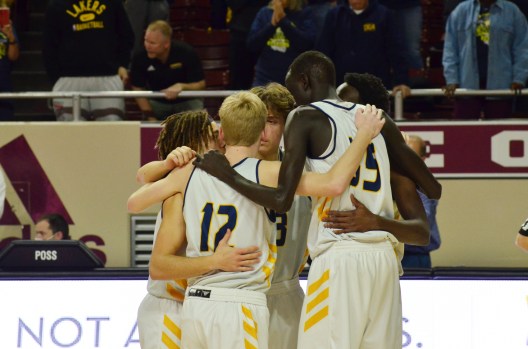 Starters for the Danville Christian boys huddle just before tipoff Thursday in their debut at the All “A” Classic. - Photo by Mike Marsee 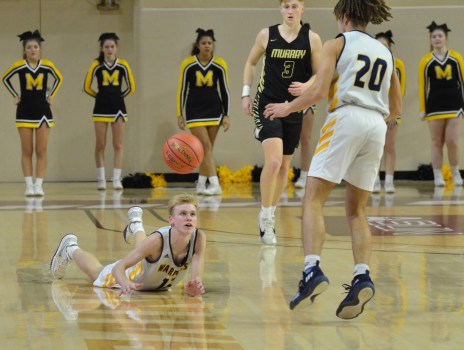 Titus Boyd, left, of Danville Christian passes the ball to teammate Noah Imfeld after coming up with a steal during the third quarter Thursday. - Photo by Mike Marsee 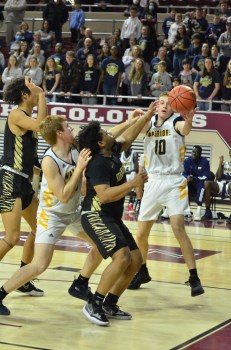 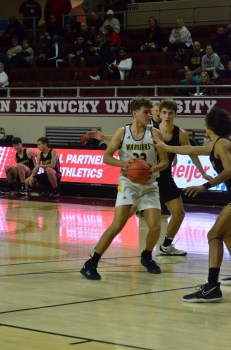 Noah Meyer of Danville Christian looks to pass the ball during the fourth quarter Thursday. - Photo by Mike Marsee 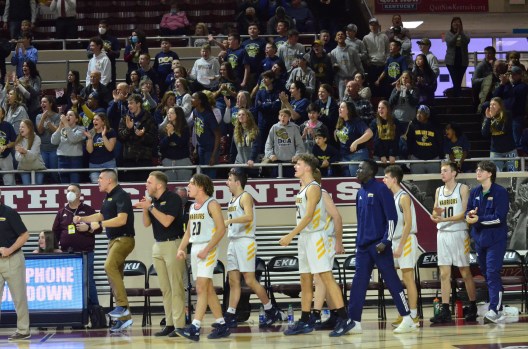 Danville Christian players and coaches cheer on their teammates in front of the team’s cheering section Thursday. - Photo by Mike Marsee 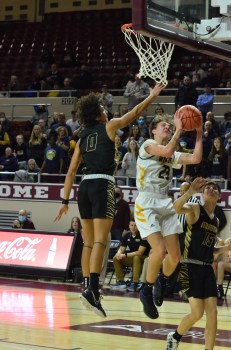 Ryan Ridge, right, of Danville Christian goes up for a shot against Murray’s Zavion Carman during the third quarter Thursday. - Photo by Mike Marsee 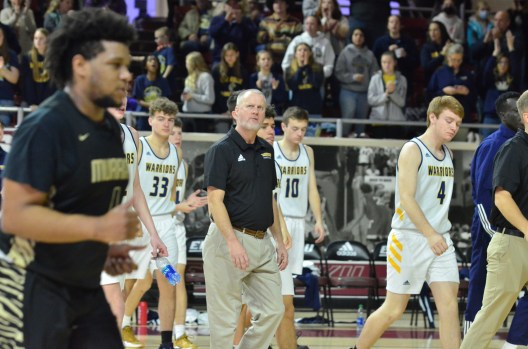 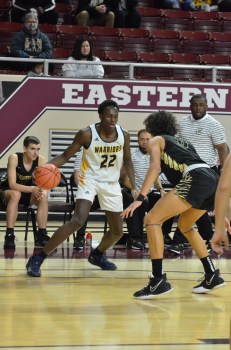 Xavier Yamo (22) of Danville Christian dribbles the ball along the perimeter during the second quarter Thursday. - Photo by Mike Marsee

RICHMOND — The Danville Christian boys weren’t in class Thursday morning, but they did go to school.

In the Warriors’ first game ever in the All “A” Classic, Murray gave them a lesson in offensive efficiency and a look at a level of competition they haven’t seen much of.

It was a lesson that DCA might not have enjoyed in the moment as their 54-45 loss played out at McBrayer Arena, but it is one that its coach hopes will serve the Warriors well both later this season and in the future.

“Playing good teams gives you confidence to play other good teams,” Story said. “When we look back at this game and look at where they are and what they could accomplish, we’re going to see that we played a really good basketball team.”

Murray is likely one of the best teams in the statewide small-school tournament, where DCA made its debut in only its third year of eligibility. The Tigers have the second-highest RPI rating in the field, and they displayed a high basketball IQ in keeping the Warriors at bay.

Even though Murray (17-2) didn’t light up the scoreboard, DCA (15-6) struggled on defense to contain an offense that moved the ball efficiently to get just the right shot. The Tigers shot 48 percent overall from the field and 44 percent from 3-point range, and they had 17 assists on their 19 field goals.

“I didn’t see many weaknesses,” Story said. “Even though there were some breakdowns on our defensive end, that’s not an overwhelming score.”

It was enough, however, to defeat a DCA team whose offense was far less effective. The Warriors fell off the pace in a second quarter that saw them go just 2 for 14 from the field, and they shot 27 percent from the field in the first half and 35 percent overall.

Just as the girls team had done the night before, the DCA boys were playing one of the biggest games in program history after qualifying for this tournament for the first time. But the Warriors still have big district games ahead in the coming days and the postseason less than a month away, and Story said he hopes the experience they gained in the All “A” will serve them well in those games and further down the road.

“When we look back at this game and look at where they are and what they could accomplish, we’re going to see that we played a really good basketball team,” he said. “Even in a loss sometimes you can get confidence, and you can improve because you can see how they move the ball and how patient they were to get exactly what they wanted, and we can watch the film and say, ‘Hey, that’s where we need to be.’”

Xavier Yamo had 12 points and six rebounds to lead DCA, whose enrollment is about one-tenth that of Murray.

The game was tied at 7- and 11-all before Murray scored 15 unanswered points. DCA went scoreless for 7:22 before Titus Boyd sank a 3-point shot with 2:01 remaining in the first half.

But the Warriors drew the line there. Ryan Ridge added a 3 and Noah Imfeld hit three free throws after time expired in the first half, and they were within 31-20 at halftime.

They went 5 for 10 overall and 3 for 5 from 3-point range in the third quarter, when Yamo scored five points and Lual Ayiei had four, and reserve Brenden Wright buried a 3 just before the buzzer to cut Murray’s lead to 44-35.

Murray kept fighting, too, however, opening the fourth quarter with eight straight points to take its largest lead at 52-35 with 5:52 to play and quash DCA’s hopes for a comeback.

Imfeld and Ridge finished with eight points each for the Warriors. The 6-11 Ayiei had four blocked shots, including two on consecutive shots in the third quarter, and Boyd had three steals.

Story said winning the All “A” regional and playing in the statewide tourney for the first time has been good for the program, even if Thursday’s result wasn’t particularly good.

“Overall, this experience gives us an opportunity to see that we can take it to the next level, and that’s exciting for the future,” he said.