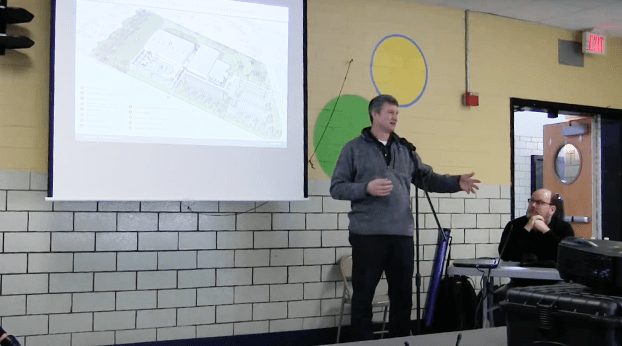 The Danville City Commission passed the first reading of an ordinance to annex the Danville-Boyle County Airport and adjacent land at a special-called meeting Tuesday.

A second reading needs to be voted on for the ordinance to be passed. The second reading will occur at their next meeting on Feb. 14, at which time the commission can hear more public comment.

“As I understand, we seek what they seek, and that is a larger presence in the aviation community; we seek economic development,” Perros said. “To me this is a win-win.”

However, airport board members have said they are disappointed in the lack of communication and collaboration between themselves and the city, and that lawyers on both sides getting involved early on impeded their ability to speak and collaborate.

“My impression was when we voted for intent, the talks would begin, but I felt like when that vote was passed, I guess due to lawyers, that’s when the talks ended,” Hollon said. “They didn’t begin like I would want to in a more open and collaborative form.”

Hollon said while other similar airports saw great benefits from being annexed to their cities, those airports wanted to be in city limits. The absence of consent and approval from the Danville airport board is a big negative.

Atkins said that despite previous negative discussions and concerns, he believes that annexation is the best thing for the airport, the city, and community members.

“In my opinion, from the data that I saw, this is what’s best for our community,” Atkins said. “Regardless of what has happened yesterday, last week, this morning, it doesn’t really matter to me. Once this vote is cast, I am saying that to move forward, we’ve got to move forward collaboratively.”

The city commission heard a presentation about several parks improvement projects. The slideshow with maps and photos of concepts can be seen here.

Design firm Bayer Becker identified four locations across Danville that would be perfect for parks and recreation improvements. They are the Jenny Rogers Center, the wellness center and aquatics, the Michael Smith Park, and the fairgrounds and Millennium Park area. Their goal is to help the city of Danville build on their parks master plan from 2018.

The city would like to turn Jenny Rogers into a community center that could hold a multitude of different activities and could evolve over time. The building and outdoor site provide a large amount of space to fill.

The firm has gotten ideas for activities on the site from the library, arts center, extension service, and other organizations. A potential daycare is one thing the city may definitely add to the center. They plan to have a community porch with a drive-up and drop-off area with parking.

With many individual classrooms and larger rooms, the center could offer meeting spaces, classes, and partner with coffee shops or food providers.

Outdoors, there could be a community garden and possible seating areas.

The community has expressed a desire for a better aquatics center for the city. John Cody, director of landscape architecture at Bayer Becker, said the current Parks and Recreation facility with the outdoor pool on the bypass is getting older and is no longer cost-effective.

They proposed that the city partner with McDowell wellness center to expand operations. The current parks facility has about 100 members, but the McDowell center has 3,000.

Bayer Becker proposed to add a state-of-the-art aquatic facility on the west end of the wellness center. The addition would be a new building equal to the size of the current wellness center, and a large outdoor pool.

They would expand parking on the south side of the property, but keep a portion of the open field on the west side. Pedestrian trails could connect to the sidewalk near the bypass.

The added building could include basketball courts, an elevated track, party rooms, and fitness equipment. The outdoor pool could have cabanas and concessions.

The Michael Smith Park, located at the intersection of Clark’s Run and Town Branch, is another area for possible projects.

Bayer Becker representatives met with some local residents in December about the park. Residents expressed interest in passive activities like sports fields, a shelter, and water activities to cool off in the summer.

They discussed the history of the park and its stone walls, wanting to incorporate historic aspects. Since the area is a floodplain, the firm explored ideas incorporating water. One idea is to build a skeletal structure that sprays water that people can walk through in the summer.

They would like to also build a bridge over Clark’s Run to the cemetery, and build a path along Town Branch to the Jenny Rogers Center and Constitution Square.

Now that Danville has access to the fairgrounds, the city would like to improve both trail and road connectivity between that and Millennium Park. Bayer Becker proposed improving signage for the park to show how to get to the fairgrounds, softball fields, etc.

Cody said that part of town needs an EMS and fire station. He suggested that if the city were to build that, they should put it by the humane society to allow direct access to the bypass.

Opportunities for the fairgrounds/Millennium Park that the firm suggested are to add six tennis courts, which would allow them to host tournaments, a high school age baseball field, a multi-use synthetic turf field, and to turn old structures on the property into pavilions for renting out.

The city has said they would like public feedback on these plans, and they are working on a way to get that feedback. The entire meeting can be seen on the Danville City YouTube page here.

The city of Danville is planning major improvements to the downtown area, in keeping with its downtown master plan. The goal is to increase pedestrian traffic and create safer vehicle passage. The slideshow with maps and graphics can be seen here.

Design firm Gresham Smith made a presentation about their design for downtown, and shared when they could have construction begin. Planners from Gresham Smith said a nicer area for people to walk around would attract more tourism to Danville, and help businesses drive traffic. The city plans to redo all the sidewalks downtown on Main Street, and some on 4th and 3rd streets.

Residents have complained about tripping on the bricks in the sidewalk. While the classic red cobblestone bricks are historic, they can be hazardous and hard to maintain. Gresham Smith proposed to replace all brick sidewalks with a diamond-scored concrete pattern, which will give the appearance of cobblestone.

They will also plant trees on 3rd and 4th streets that are not ginkgo trees. They may also replace the ginkgos on Main Street.

The sidewalk redesign will maximize space for pedestrians by adding sidewalk space to each intersection corner of Main Street. They will add benches close to the streets and create more outdoor eating areas.

The Gresham Smith planners proposed a larger area for outdoor dining somewhere along 3rd and/or 4th streets. Similar to the size of Weisiger Park, businesses could put tables out in a wide-open area. However, the addition of pedestrian areas would mean a loss of parking space.

With expanded sidewalks, Main Street will lose 20 parking spots. However, they will add nine spots to 3rd and 4th streets. The total loss of parking downtown is 11 spots.

The city will replace street lights and the fountain in Weisiger Park, and create a planted median on Main Street.

The city will also be moving utilities on 4th Street underground. Transportation Engineer John Eckler from Gresham Smith said they will start that construction sooner than other construction. One lane on 4th Street will be closed for about four months.

For work on the median, Main Street will close completely for two 10-day periods. Workers will complete the section between 2nd and 3rd streets, then between 3rd and 4th.

Pedestrians will still be able to walk through the streets at that time. Main Street businesses will be given a two-week notice for closures.

“The idea is we want to get those sidewalks, maybe not every tree or every light, but get as much of that in place in time for the holiday season,” Eckler said.

They hope to have all downtown construction done by May 2023. The streetscape presentation video can be seen here.