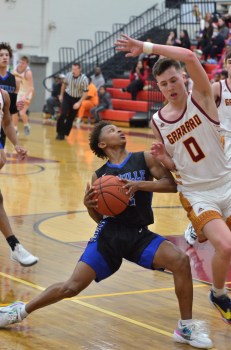 Jaiden Hannibel of Danville is fouled by Garrard County’s Ethan Cooper as he looks for a shot during the first quarter Tuesday. - Photo by Mike Marsee 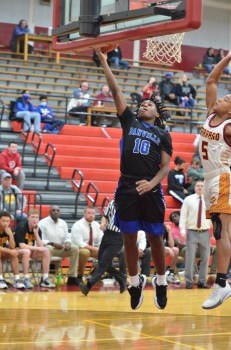 Demauriah Brown of Danville gets past Garrard County’s Montavin Quisenberry for a layup during the first quarter Tuesday. - Photo by Mike Marsee 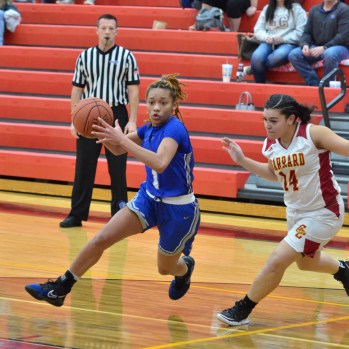 Love Mays of Danville drives toward the lane past Garrard County’s 14 during the first quarter Tuesday. - Photo by Mike Marsee 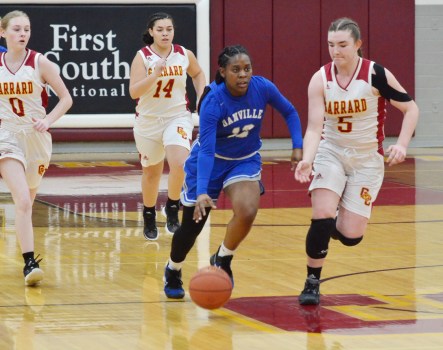 Tyliah Bradshaw of Danville leads a fast break as Garrard County’s 0, (0), 14 and Addison Pevley (5) give chase during the first quarter Tuesday. - Photo by Mike Marsee 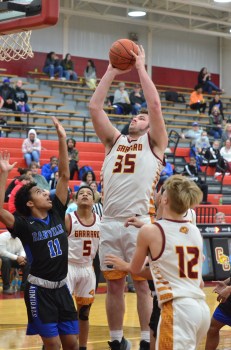 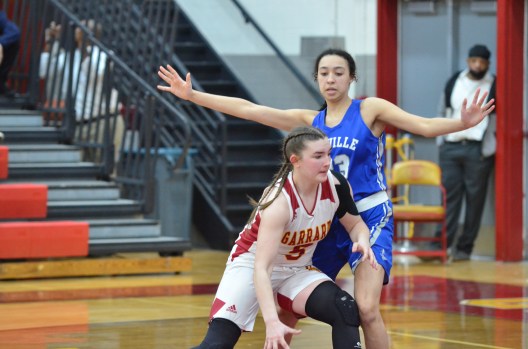 Addison Pevley (5) of Garrard County drives toward the basket against Danville’s Desiree Tandy during the third quarter Tuesday. - Photo by Mike Marsee

LANCASTER — There isn’t much difference between the Danville and Garrard County boys these days.

Danville got just enough to go its way Tuesday night to claim a close victory at Garrard, just as Garrard had done when it visited Danville a week earlier.

The Admirals countered an outstanding individual performance with a sound team effort on offense as they snapped a five-game losing streak with a 66-62 win at Garrard Middle School.

Danville (11-11, 1-4 45th District) found multiple scoring sources, strung together the two most important scoring runs of the second half and made free throws at an unusual rate as they avenged a 52-48 loss to Garrard (11-12, 1-5) a week earlier.

But McKinney said the best thing the Admirals did was cancel out a 34-point performance by Garrard guard Montavin Quisenberry.

Quisenberry had one of his best games of the season and got one big basket after another, but Danville seemed to have an answer for almost every one of them.

“I thought we weathered storms,” he said. “We couldn’t stop Quisenberry. He hit 3s, he drove. But it’s good when they score and you come back and get a bucket.”

Four players scored in double figures for Danville, led by Dante Hayden with 18 points, and Garrard coach Brandon Cooper said that was a recipe for success the Golden Lions couldn’t match.

“That’s going to win a lot of ballgames,” Cooper said. “Some of our other guys didn’t play their best game tonight. … It’s hard to win games like that. You can’t put a load on one player.”

Jalen Dunn scored 15 points for Danville, followed by Demauriah Brown and Jarius Bryant with 12 each.

Bryant and Dunn got consecutive layups in transition to cap a string of six straight points that gave the Admirals a 59-52 lead with 2:08 to play in a game that had seven ties and four lead changes.

“That ended up being the difference,” McKinney said.

Three different players then combined to go 7 for 8 at the foul line in the final 1:13 to keep Garrard at bay as the Lions tried to rally behind Quisenberry, who scored eight points in the final 1:54.

“Montavin had an outstanding game. I thought he played his butt off, and he hit shots,” Cooper said. “He had a couple weeks that he’s been really flat, everything’s been a little bit low, so the past few days we’ve been trying to get him to get a little air under his shot. Obviously, it worked pretty well for him.”

Quisenberry’s three-point play with 1:03 to play pulled the Lions within 61-60, and they were counting on Danville to miss a few free throws down the stretch, and with good reason.

“We post the stats to the KHSAA (scoreboard), and the stats don’t tell a lie,” McKinney said.

“Some guys that hadn’t hit free throws for them this season stepped up and knocked down free throws,” Cooper said.

The Admirals were shooting 57 percent at the line on the season and were 2 for 9 in the first half Tuesday, but they went 17 for 18 in the second half.

Danville scored 19 points in the third quarter and 25 in the fourth after a 22-point first half.

“That’s big numbers for them,” Cooper said. “We had been defending pretty well, I didn’t feel like we did our part (tonight).”

The Admirals went 12 for 19 from the field and outrebounded Garrard 14-8 in the second half after going 9 for 35 and getting outrebounded 27-20 in the first half.

“If we’re close to even on the glass then we’ve got a decent chance,” McKinney said. “We fought hard for rebounds on both ends. I thought we gang-rebounded a little better tonight.”

Garrard led 30-24 early in the second half before Danville scored nine straight points, all on putbacks or layups. And the Admirals outscored the Lions 9-2 after Garrard tied the game for the final time at 50-all in the fourth quarter.

The Lions had won three of its previous four games by a total of 12 points before falling to the Admirals.

“Danville’s had a little bit of a struggle here lately, but they’ve got all the pieces to be a good team,” Cooper said. “We do, too.”
Garrard, Danville and Danville Christian each have just one district win, but Cooper said nothing is being conceded to the teams at the top of the standings, Boyle County and Lincoln County.

“Everybody’s pretty set on, ‘This team’s going to win it and this team’s going to be in second,’ but there’s five teams and three of the others might think a little differently,” he said. “I think (Danville is) very capable of it, and I think we still are, also.”

Girls
Danville 73
Garrard County 42
Danville (17-3, 4-0 45th District) made most of its shots in the first quarter and capitalized on a slew of second chances over the balance of the game to defeat Garrard (12-8, 3-3) for the second time in eight days.

As more shots started missing the mark, they went on to grab 15 offensive rebounds and outrebound the Lady Lions 37-28.

“One of our goals was to try to get every miss,” Danville coach Judie Mason said. “I don’t know if we got every miss, but … I thought our guards crashed the boards hard. And we shot the lights out at the beginning of the game, which helps.”

Samantha Bottom hit two 3-pointers and Lara Akers and Tyliah Bradshaw hit one each in the first quarter for the Lady Admirals.

Akers scored 21 points and Bottoms and Bradshaw had 11 each for Danville, which was 4 for 16 behind the line and 18 for 44 from the field over the final three periods.

“I just wanted us to come out and play straight up and see what we could do, and I thought we played pretty well,” Mason said.

Garrard, which shot 34 percent from the field, got 15 points from Addison Pevley and eight from Amauri Blackford.

“They’re really good defensively, and they take away a lot of the things we like to do well,” Garrard coach Jimmie McCulley said.

McCulley said this loss and Garrard’s 78-35 loss in the teams’ first meeting might be hard to swallow but would help the Lady Lions in the long run.

“You don’t get better by not playing teams like that,” he said. “I don’t care what that scoreboard says, you only get better.”