Payne piling up support to be UofL’s next coach 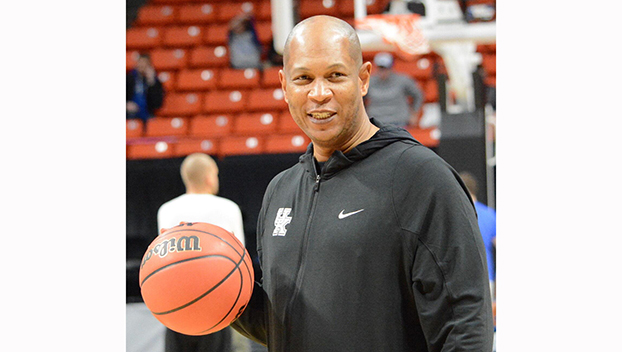 Former Louisville basketball player, as well as former Kentucky assistant and current New York Knicks assistant coach Kenny Payne is being discussed as a candidate to be the University of Louisville’s next men’s basketball coach. - Photo by Keith Taylor

Whether the endorsements he is getting will lead to his first head coaching job remains to be seen. UofL athletics director Josh Heird hasn’t provided an update on the coaching search since the school parted ways with Mack on Jan. 26, and Payne hasn’t publicly declared whether or not he is interested.

But Payne, 55, is compiling an impressive list of advocates, headed by his current boss, Knicks coach Thom Thibodeau, who has said that his assistant “would be a great fit.”

After playing in various professional leagues for 11 seasons, including four with the Philadelphia 76ers, Payne returned to Louisville to complete his education, and became one of the first success stories of the Cardinal Degree Completion Program, which was started in 2000 to help former student-athletes complete their degrees. More than 14 years after playing his final game in a Louisville uniform, Payne earned his bachelors of science degree in sport administration in 2003.

“I think (Payne) has great comfort in the college game because of the great success that they had at Kentucky,” Thibodeau said. “I think for him, the Louisville job is obviously appealing because it’s his alma mater.”

Payne was an assistant coach at Oregon from 2004-09 before joining John Calipari’s staff at UK, first as an assistant then as associate head coach. He is in his second season with the Knicks.

“He’s come into the league; he’s played in the league,” Thibodeau said. “And obviously having been in college, he studies the game, great with players. He’s fit in seamlessly (with the Knicks). He’d be ideal for Louisville. He’s strong on both sides of the ball, he’s strong with individual development. And he’s been around. He brings a lot of experience to any situation he goes to.”

A number of former UofL players have expressed their preference for Payne, including former UofL All-American Butch Beard, who has been critical of the school for its record on minority hires and asked to be disassociated with UofL a year ago, said he would be glad to help the program any way he could if Payne is hired.

ESPN commentator Dick Vitale immediately urged UofL to hire Payne with a Twitter post, saying “Come on @Louisville MBB don’t waste time bring KENNY PAYNE where he belongs. They tell me at Churchill Downs he is 10 lengths ahead. But the big ?

Can the administration get the deal done — recruiting would go up big time. 5 star talents will arrive!”

“He’s a super connector,” Ellis said. “I got a chance to know him during the time where I was at Kentucky calling a game, and just watching how he is with people, and the kind of respect kids give to him. He’s been in the business for 30 years … I think he’s connected to all the right sources.”

“Imagine if, the second week of February or the first week of February, you were able to hire Kenny Payne,” Greenberg said. “He could hit the road recruiting, he could basically find a way to build a bridge to connect back the community to the program, maybe eliminate a little bit of that (NCAA) dark cloud. Bring the former players back, bring the community back involved.

Russ Brown, a former sportswriter for The Courier-Journal and USA Today, covers University of Louisville sports and college football and basketball for Kentucky Today. He can be contacted at 0926.russ.brown@gmail.com.