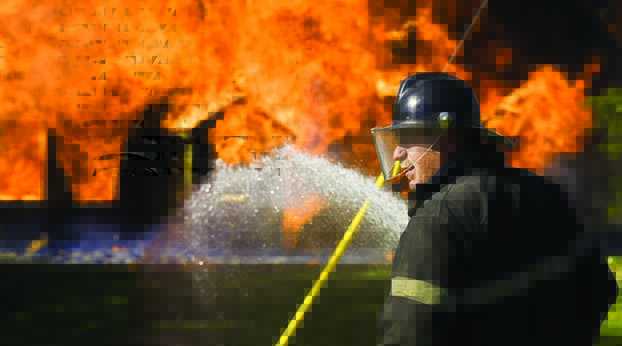 One of the leading causes of house fires in the U.S. is space heaters. They are responsible for about 1/3 of home heating fires. Boyle County and Danville fire departments remind citizens of the dangers of using space heaters.

While convenient and sometimes necessary, space heaters are dangerous in different ways. According to the Consumer Product Safety Commission, both fixed and portable space heaters are associated with about 21,800 residential fires every year in the U.S. About 300 people die each year in fires caused by space heaters.

“One major thing with space heaters is that they use a lot of electricity and they can overload circuits and get quite hot,” said Ben Thompson with the Boyle County Fire Department.

When the heaters get very hot, they can ignite something nearby that’s flammable. Thompson said people tend to put them near couches, recliners, curtains, and other flammable materials without thinking about it.

If people need to use space heaters, they should keep them at least three feet away from anything that could catch on fire.

“There’s always a chance of a fire if it’s too close to or cluttered around curtains, towels, or recliners,” Scott Lawson, fire marshal with the Danville Fire Department said.

Thompson said there have been fires caused by space heaters in past years in Boyle County. Lawson recalled one fire caused by a space heater in the past year in Danville; it caused property damage but no injuries.

The heaters can also be a tripping hazard, and can easily be knocked over. Thompson said the radiator heaters, which are heavier and bulkier, are harder to knock over, whereas the smaller devices that blow hot air are easier to bump into or trip over.

Children and pets should be monitored around space heaters. Not only could they be burned by them, but they are more likely to knock over the heaters, potentially causing a fire.

Space heaters should not be left on unattended for long periods of time. People should turn them off when leaving the house. They should only be plugged into a wall outlet, not an extension cord, for risk of overheating the cord.

Since they use so much electricity, people should avoid using other major appliances on the same circuit. They could also cause shock if exposed to water. People should keep them out of bathrooms and away from kitchens.

Thompson said one of the worst places to put the heaters are in bedrooms to have on when sleeping. Having one near a bed can cause bed sheets to catch fire. If someone gets up in the night, they can easily bump into the heater in the dark or trip on the cord. Even carpet can catch fire if a heater is knocked over.

The safest place to put them is in an open living area closer to the center of a room, not near anything flammable. Thompson said a hallway is also a safe place as long as it won’t be bumped into.

Before plugging in a heater, people should check if the wire is frayed or otherwise damaged. People should upgrade to newer models if they are using an outdated heater.

“The most important thing when you’re going to buy a space heater, make sure it meets university laboratory codes, so make sure it has a UL sticker on it,” Lawson said.

Another danger is the potential for carbon monoxide from fuel-fired heaters. People should make sure their carbon monoxide detectors are working properly, especially if their heating systems are older.

“We’re here for the community, and not only space heaters, but with this cold weather, we need to worry about carbon monoxide,” Lawson said.

In some cases, space heaters are the only option in keeping people warm. However, the risks of using them can possibly outweigh the benefits.

Lawson said if anything, not being informed about correct usage is the biggest risk. Any equipment can malfunction if used incorrectly; he said people should read the manual for all equipment that’s new to them. Space heaters should only be used to temporarily heat small spaces.