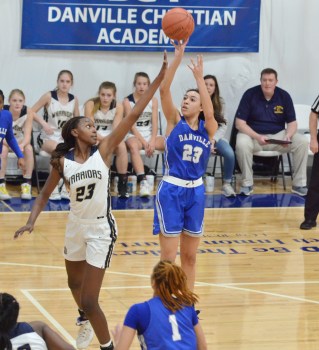 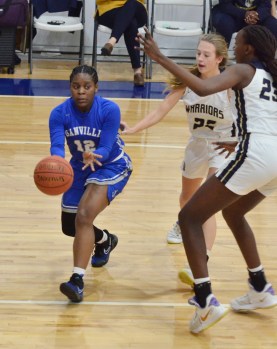 Tyliah Bradshaw (12) of Danville passes the ball across the lane as Danville Christian’s Victoria Inmon, center, and Grace Mbugua defend her during the first quarter Saturday. - Photo by Mike Marsee 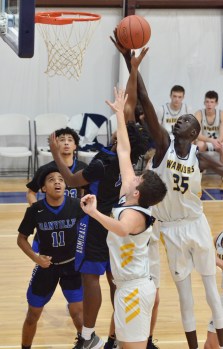 Lual Ayiei (35) of Danville Christian reaches above the crowd for a rebound during the first quarter Saturday. - Photo by Mike Marsee 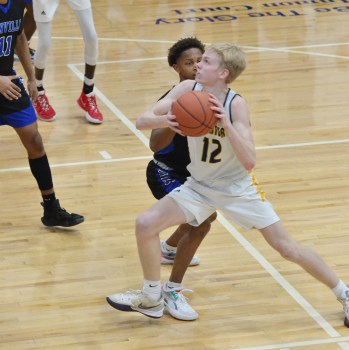 Titus Boyd (12) of Danville Christian spins past Danville’s Jaiden Hannibal as he moves toward the basket during the third quarter Saturday. - Photo by Mike Marsee 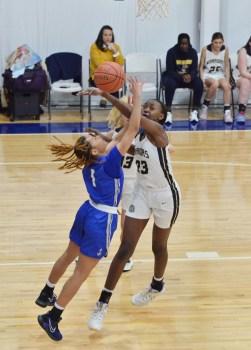 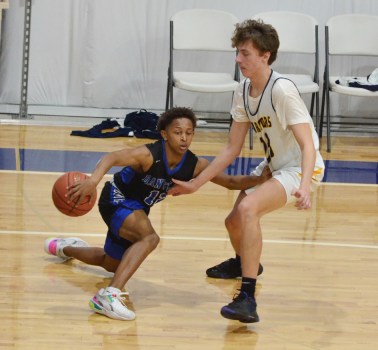 Danville’s first loss ever to DCA cost the Lady Admirals a chance to play in the All “A” Classic, and their coach wanted that to motivate them Saturday in the teams’ first meeting since that game.

The result of the rematch was different, as Danville took advantage of DCA’s many turnovers to win 50-35 and avenge a loss three weeks earlier in the finals of the 12th Region All “A” Classic.

Mason and her players were still smarting from that loss, in no small part because the Lady Admirals were considered a contender for the All “A” championship.

“I don’t ever want to forget about that game,” Mason said. “In my opinion, we had a good chance to win it all, and that doesn’t come around too many times … so I don’t want them to ever forget about it.”

The Lady Admirals took advantage of 20 first-half turnovers by DCA to open a double-digit lead in the second quarter and were never threatened as they extended their winning streak to six games since the DCA defeat.

Desiree Tandy scored 17 points to lead Danville, which has lost only once in 13 games since Christmas.

DCA (15-5, 3-1) struggled just to get shots in the first half, as the Lady Warriors had only 16 field goal attempts compared to 30 for Danville because they turned the ball over time after time against the Lady Admirals’ pressure defense.

“Some of that is Danville’s defense, and some of that is us being unseasoned at the point guard possession,” DCA coach Billy Inmon said. “I felt like if we could have cleaned up our press breaker, it would have been maybe not a different outcome, but a different game.”

Mason said Danville made some defensive changes to try to speed the game up.

“We’re not a very good half-court team,” she said. “We’ve got to get in a running game, and our defense is the key.”

Danville didn’t turn its defense into offense for the first six minutes of the game as it missed its first 11 shots from the field and fell behind 5-0 before Love Mays scored the Lady Admirals’ first basket off a DCA turnover with 1:45 left in the first period.

That started a run of eight straight points, and Danville went on to outscore DCA 21-6 over the balance of the first half.

Two buckets by Tandy and a 3-point goal by Samantha Bottom gave the Lady Admirals seven points in the final 36 seconds of the half and sent them to the locker room with a 21-11 lead.

“We didn’t score the first six minutes, and I think that was a hangover from the All ‘A,’” Mason said. “It was in their head. And I told them, ‘Just play,’ and I thought the second quarter we played well.”

Danville maintained control in the second half, stretching its lead to 17 points in the third quarter and taking its largest lead at 42-23 with 6:33 remaining.

It was the lowest-scoring game of the season for the Lady Admirals, who rank third in the state in scoring at 66.6 points per game.

Meanwhile, it was the third straight game in which DCA scored 35 points or less. The Lady Warriors finished with 29 turnovers.

Grace Mbugua, the state’s leading rebounder, had 28 points and 16 rebounds in DCA’s Jan. 14 win over Danville, its first victory in five games in the series since DCA joined the KHSAA. She had 20 rebounds and six blocked shots Saturday, but her scoring output was lowered to 17 points, and none of her teammates scored more than eight points.

“It’s more about pressure on the guards than it is her. If she can catch it, she’s going to put the ball in the basket,” Mason said.

Tristen Himes scored eight points for DCA, which is 2-3 since its win over Danville.

Mason said that game will still be on her mind when these two teams meet again Thursday at Danville.

“I promise you I’ll never forget that game,” she said. “Hopefully we’ll have this same intensity next week and put the ball in the basket.”

Thursday’s game, along with a boys game, will be played at Danville after this doubleheader — originally scheduled for last Friday but postponed due to winter weather — was moved two miles north due to a roof leak in Danville’s gym.

DCA’s second victory over Danville didn’t carry quite as much significance as the first, but it was not without importance.

The Warriors’ latest win was their first in a designated 45th District game, although, like the DCA girls, they had beaten the Admirals to win the 12th Region All “A” Classic.

Titus Boyd scored 21 points to lead four players in double figures for DCA (16-7, 1-3 district), which held off Danville (11-12, 1-4) down the stretch to add another building block to the program’s foundation.

Story said the Warriors should also get a shot of confidence from this win, which follows a 63-49 victory over Danville on Jan. 14.

“To beat them twice, you think maybe the first one wasn’t a fluke. You get more confidence being able to handle their pressure defense, because not too many teams put that much pressure on you,” Story said.

DCA, which is 2-3 all-time against Danville, survived that pressure and the 21 turnovers it helped to create. The Warriors gave the ball up 10 times in the first quarter and eight times in the fourth.

Danville ran out of time, however, and DCA slammed the door when Ryan Ridge hit two free throws and Boyd hit one of two.

“When you get in a hole in the fourth quarter, it’s hard to come back,” Danville coach Ed McKinney said.

Boyd was effective in getting to the basket and had a big day at the foul line, where he made his first 10 shots and finished 13 for 16.

“I thought Titus played great, getting in the paint, making plays for himself and making plays for other people,” Story said. “Danville plays aggressive man-to-man, and if you can handle it, you can get by people. … Titus is getting better at that, and he’s hard to guard as a lefty.”

“We don’t have good size to defend either of their bigs inside, so you try to heat the ball up,” he said. “You’ve got to pick your poison. … If we can’t get pressure on the ball, then we can’t defend the post.”

Xavier Yamo had 12 points and Ridge had 10, and both got all of their points in the second half, when the Warriors went 15 for 31 from the field.

“That’s a lot of shots for a half for us, and to get that many quality shots was good,” Story said.

Danville also had four players in double figures, led by Dunn, who had 17 points in the second half and 19 in all. Dante Hayden and Ontario Hill scored 12 points each, and Jaiden Hannibal had 10.

The Admirals led 26-18 in the second quarter and 30-26 at halftime, but DCA opened the second half with eight straight points and led 47-39 late in the third period before stretching the margin to double digits early in the fourth quarter.