Danville woman ships snowman to her sister in Florida 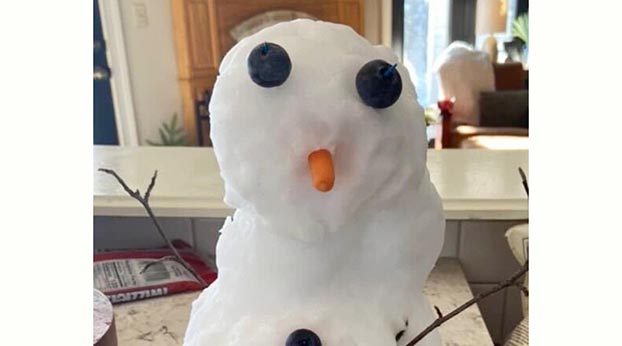 Lucky, a snowman shipped from Kentucky to Florida by Amber Estes of Danville, arrived safely. Estes shipped the snowman to her sister, a teacher at a school in Florida. - Amber Estes photo 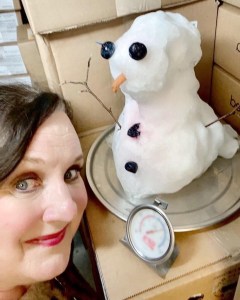 Robin Hughes, a teacher at SouthShore Charter Academy in Florida, poses with Lucky, a snowman shipped to her by her sister, Amber Estes, who lives in Danville. – Robin Hughes photo

A classroom of kindergarten students in Florida got a big surprise in late January when they received a snowman shipped from Danville.

SouthShore Charter Academy kindergarten teacher Robin Hughes, who is from Louisa, Kentucky, had the idea to show her students snow in a state that rarely goes below freezing. When she asked her students who had seen snow before, only two of them raised their hands.

At Thanksgiving, Hughes asked her sister Amber Estes, who lives in Danville, if she would be willing to ship her a snowman if it snowed this year. Estes told WLEX-TV 18 she didn’t think she would have to follow through on the promise, given that it hardly snows in Kentucky. “I said to her, we haven’t had a measurable amount of snow; I was making every excuse in the world and I accepted the challenge because I knew that I would never have to live up to it,” Estes told the TV station.

But when it snowed 10 inches in early January, Estes made the snowman after all. After 10 days of refrigerating and planning, she put the small snowman in a box in foil and Styrofoam with ice packs. She shipped it overnight to the school in Riverview, Florida.

The sisters decided that if the snowman survived the trip, he would be named Lucky. If he did not, he would be called Puddles.

SouthShore Academy live-streamed the snowman’s reveal on its Facebook page when he arrived. Kids gathered around the box as Hughes slowly opened its flaps, revealing that the snowman was, indeed, Lucky.

“The pure joy of seeing that snowman, to me that’s what teaching is about,” Hughes said to WLEX. “Anything I can do as a teacher to bring joy to the classroom and also teach them a little something, then it makes it all worth it. And my sister was just the greatest partner in crime to help me do that.”

Kids huddled around Lucky, taking turns to touch the snow. Lucky is being stored in the school’s cafeteria freezer, and Hughes still brings him out for students to see.

When Spring comes, Hughes will let the snowman melt to teach kids a new lesson. She will use Lucky’s water to water a new plant on Earth Day.