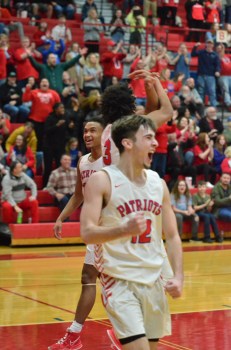 Evan Smith (12) of Lincoln County celebrates the Patriots’ win over Boyle County on Monday with teammates Jaxon Smith, back, and Tramane Alcorn. - Photo by Mike Marsee 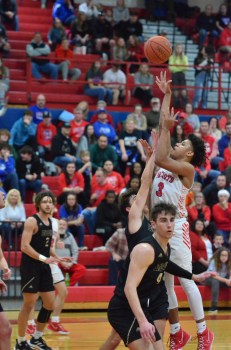 Tramane Alcorn (3) of Lincoln County goes up for a shot in the lane during the third quarter Monday. - Photo by Mike Marsee 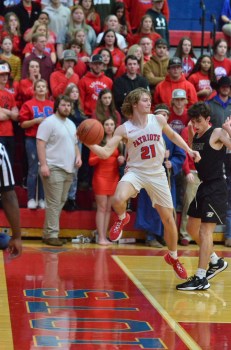 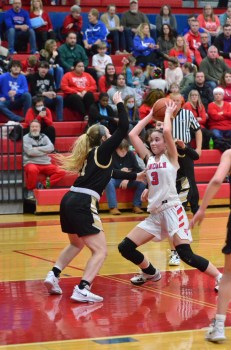 Chloe Ralston of Lincoln County passes the ball toward the post as Boyle County’s Ella Coffey defends her during the third quarter Monday. - Photo by Mike Marsee 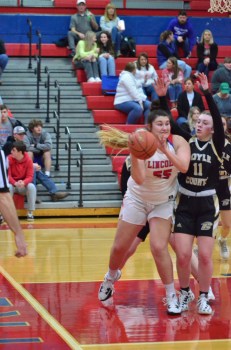 Emily Estes of Lincoln County passes the ball out of the lane as Boyle County’s Hallie Coffey defends her during the third quarter Monday. - Photo by Mike Marsee 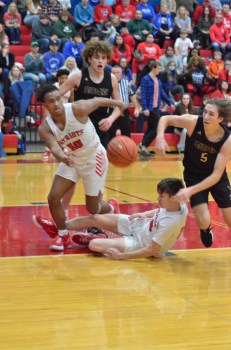 Jaxon Smith (10) of Lincoln County and Kason Myers (5) of Boyle County hurdle Lincoln’s Colton Ralston as they pursue a loose ball during the second quarter Monday. - Photo by Mike Marsee 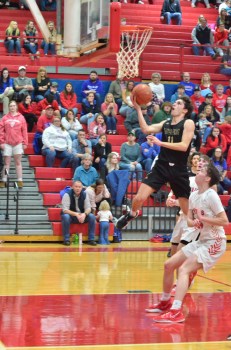 William Carr of Boyle County gets past the Lincoln County defense for a layup during the second quarter Monday. - Photo by Mike Marsee 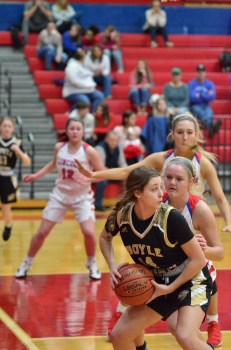 Camryn Thompson (14) of Boyle County looks for a teammate as Lincoln County’s Chelsea Reed defends her during the second quarter Monday. - Photo by Mike Marsee 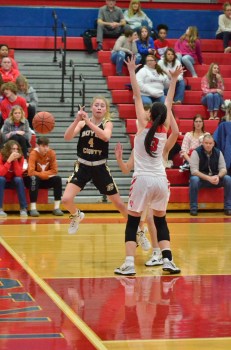 Annabelle Tarter (4) of Boyle County watches the ball go out of bounds after it was deflected by Lincoln County’s MaKayla Greer, who is behind Lincoln’s Chloe Ralston (3), during the second quarter Monday. - Photo by Mike Marsee

The Lincoln boys used high energy and pressure defense to fuel a rally that carried them to a victory Monday night in the latest chapter of one of the most intense rivalries around.

The host Patriots outscored the Rebels 22-5 over the final 4:39 to win 49-41 and gain a split of the regular-season series between the teams that played for the district and regional championships last season.

“I’m really proud of our kids for fighting back and scratching and clawing,” Lincoln coach Jeff Jackson said. “We did a lot of good things, and it’s a really, really good win.”

The press became a necessity after Boyle took its largest lead at 36-27 with 4:53 to play, and it quickly became a problem for the Rebels.

“They turned up the pressure and they started pressuring us and bodying us, and we just didn’t handle it,” Boyle coach Dennie Webb said. “We let them take us out of what we were trying to do, and until we (can prevent that) that’s what teams are going to do to us.”

Lincoln scored eight straight points in 1:03 to cut its deficit to two, used a 6-0 spurt to take its first lead since early in the second quarter and scored the last nine points of the game after Boyle went back in front to win a game that had been postponed three days earlier due to a winter storm.

“We’ve been thinking about it all week,” Lincoln guard Tramane Alcorn said.

Boyle turned the ball over 10 times in the second half, and half a dozen or so of those turnovers came during the final 4 1/2 minutes.

“We defended really well, we contested shots, we rebounded, we got to loose basketballs,” Jackson said.

The result was a fourth straight win for Lincoln, which is 8-1 since a 43-40 loss at Boyle on Jan. 14, and a tie in the loss column at the top of the district standings.

“Revenge,” Alcorn said. “We needed this one.”

It was Boyle’s fourth loss in five games, all of them close games and all games in which the Rebels led. And that’s a serious concern for Webb with the postseason less than two weeks away.

“We’ve done this in all four losses: We get a lead and get right where we want to be and we fold,” Webb said. “We’ve got to find the answer and we’ve got to find it quick.”

“Hats off to Lincoln. We had a lead and they fought and scrapped and took it back and got the win.”

Alcorn and Evan Smith scored 11 points each and Colton Ralston added 10 for Lincoln, which was 9 for 18 from the field in the second half and shot 40 percent overall.

Smith, who transferred to Lincoln last year from Southwestern, also led the defensive effort to contain Boyle’s Luke Imfeld, who scored 25 points and hit a game-winning 3-point shot with four seconds left in the teams’ first meeting. Imfeld was held to two field goals and 12 points — well below his average of 22.8 — in the rematch.

“Evan had his best game since he’s been with us this year on both ends of the floor,” Jackson said. “Clayton Smith comes in (off the bench) and brings energy and plays hard … and he got us going.

“I thought they all played hard. We battled, and you have to battle with those guys.”

Imfeld sank a 3 about a minute later to put Boyle back on top, but Ralston answered with a 3 that elicited a tremendous roar from the home crowd and gave Lincoln the lead for good at 43-41 with 50 seconds left.

“Our bench and these fans (energized us),” Alcorn said. “These fans are crazy.”

The Rebels missed a free throw on the front end of the bonus and turned the ball over twice in the remaining time, and Smith and Ralston hit two free throws each for the Patriots before Smith punctuated the win with a breakaway layup just ahead of the buzzer that sent Lincoln students streaming onto the court in celebration.

Lincoln, which beat Boyle for the 45th District title last season, and Boyle, which avenged that loss with a win in the 12th Region final, had split 12 games over the past five seasons before the Patriots won this one before a boisterous crowd. The last seven games in the series have been decided by 10 points or less.

“It’s a great rivalry. We tell our kids it’s one of the top rivalries in the state of Kentucky,” Jackson said. “The crowd’s really good, the student bodies from both schools are really good, and I think there’s a lot of respect between the coaching staffs and the players.”

William Carr scored a game-high 18 points and Jakei Tarter had 14 rebounds for Boyle, which shot 30 percent from the field.

The Lady Patriots held the Lady Rebels to their lowest point total in three seasons, holding them to only five field goals and 16 percent shooting from the field.

Lincoln kept Boyle’s best scorer under wraps and almost everyone else off the board entirely to complete a regular-season sweep. Boyle’s Peyton Bugg, who averages 14 points per game, was held to only one basket and scored eight points.

“We did a good job of keeping Bugg in front of us, and that was the main key,” Lincoln coach James Jackson said. “If you let her break you down, get in the cracks and seams, they’re hard to beat.”

Only one other player scored for Boyle, which was 5 for 32 overall from the field and 2 for 16 from 3-point range.

Meanwhile, Lincoln went 9 for 20 from the field in the second half after going 4 for 15 in the first half.

“We needed that,” Jackson said. “We’ve had some great defensive nights the last three or four games. … We just needed to see the ball go through the hoop, and I’m hoping that carries over.

That’s just getting a lot of shots up every day, and we’ll continue to do that.”

Elly Sims hit two 3-pointers and Macey Rice had one in the fourth quarter to help Lincoln maintain its lead, while Boyle went 0 for 6 from the field in the final period.

Ella Coffey scored a game-high 12 points and had seven rebounds for Boyle.