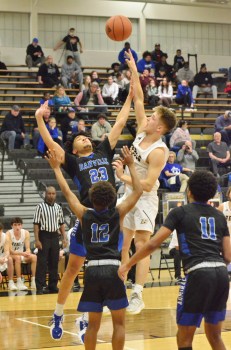 Cruise Wilson of Boyle County puts up a hook shot over Danville’s Camron Jackson during the fourth quarter Tuesday. - Photo by Mike Marsee 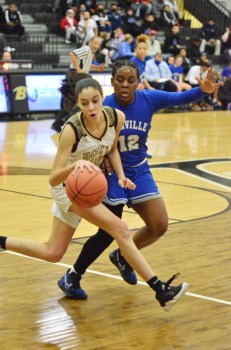 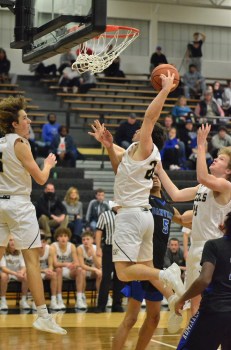 Dalton Stone of Boyle County goes to the basket as teammates Kason Myers, left, and Conner Padgett look on during the third quarter Tuesday. - Photo by Mike Marsee 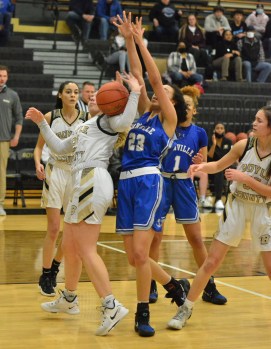 Ella Coffey, left, of Boyle County and Desiree Tandy of Danville try to get their hands on a rebound during the second quarter Tuesday. - Photo by Mike Marsee 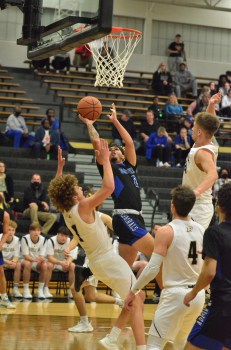 Dante Hayden of Danville takes the ball to the basket against Boyle County defenders Jakei Tarter (1), Hagan Webb (4) and Cruise Wilson during the first quarter Tuesday. - Photo by Mike Marsee

The Boyle County boys found themselves in a different kind of grind Tuesday night.

Twenty-four hours after the Rebels surrendered a fourth-quarter lead in a loss to one of its biggest rivals, the other one had them on the ropes.

However, a Boyle team that has recently made a habit of losing leads took one away this time, coming from behind to defeat Danville 48-36.

Host Boyle trailed Danville, a team it had beaten by 28 points last month, for almost three-quarters of the game before turning things around.

“It was hard. We really had to dig deep,” Boyle guard Luke Imfeld said. “I think that says a lot about our team, how we can come out and play back to back nights.

I think it’s going to help us when the regional tournament rolls around when you’ve got to play multiple games in a row.”

Imfeld and his fellow starters got an unexpected breather early in the second half when Boyle coach Dennie Webb benched all five of them for about two minutes.

The work done by the five reserves who were pressed into service and by the starters upon their return helped Boyle (17-6, 6-1 45th District) flip the script in the third quarter, and they pulled away in the fourth quarter to complete a sweep of the regular-season series with Danville (11-13, 1-5).

“It definitely got us fired up,” said Imfeld, who led all scorers with 18 points. “We decided this wasn’t going to happen to us. We weren’t going to lose.”

Even so, it came as no surprise to Webb that the Rebels were struggling. This was the second game of a back-to-back that began with a 49-41 loss at Lincoln County that he said was both physically and emotionally draining.

“They were down after last night, but they were probably glad that we turned around and played again and put that one behind us,” Webb said. “And they were tired. You could tell.

“I was afraid of that coming into this one. It’s a tough turnaround, and against two of our biggest rivals.”

Danville opened a 14-4 lead in the first quarter and stayed in front until the final minute of the third quarter before giving way.

Danville coach Ed McKinney said the Admirals fought valiantly against a Boyle team that had beaten them 72-44 on Jan. 21.

“For the most part, I thought we played really hard, I thought we were after it,” McKinney said. “A lot of it is just a loose ball, we don’t pick it up and they tip it out to Imfeld and he hits a 3, or we don’t switch or we halfway switch (on defense) so we’re unsure … or a boxout.”

There’s no doubt that Boyle got a boost from the five players who replaced the Rebels’ starters in the opening seconds of the third quarter, even though the Rebels didn’t score during their time on the floor.

Webb called timeout after Danville’s Dante Hayden scored on the opening possession, and he asked his assistant coaches to send five new players to the scorer’s table.

“There were no head games there. To be honest with you, I was really mad at them and didn’t want them out there,” Webb said.

Webb later learned that the defensive breakdown that prompted the change was due more to misunderstanding than to willful disobedience.

“Apparently there was a little miscommunication from what I told them to do coming out on the floor and what they ended up running,” he said.

Colin Green, Jack Little, Kason Myers, Conner Padgett, and Dalton Stone combined to go 0 for 5 from the field during their time on the floor, but three of their shots easily could have gone in. And they grabbed five rebounds, including two offensive boards on one possession.

“So much credit to them,” Imfeld said. “They work so hard, they’re always pushing us in practice, they do the work that nobody else sees, and they got to showcase it a little bit tonight.”

The starters cheered their teammates on from the bench, and the subs returned the favor when the starters returned to the floor and turned things around with a 16-6 run that turned a 24-19 deficit into a 35-30 lead.

Jakei Tarter started the run with consecutive layups, and his steal and layup with 46 seconds left in the third period gave the Rebels their first lead at 30-28.

Hayden stopped the Boyle run with a 3-pointer, but the Rebels responded with an 8-0 run that included 3s by Imfeld and Myers and that made it 43-33 with 2:31 to play.

Myers and Tarter scored 12 points each and Tarter had 12 rebounds for Boyle, which outrebounded Danville 41-28. Eight different players shared the Rebels’ 16 offensive rebounds, which led to 20 second-chance points.

Hayden had 14 points and Jarius Bryant had eight for Danville, which shot 32 percent from the field in its lowest-scoring game of the season.

McKinney said the Admirals need “to figure out ways to score” in grind-it-out games like this, but he said he was encouraged by the fight they showed.

“Jalen Dunn, he plays his heart out, and some of these young guys are starting to get it, how intense it is (in district games),” he said. “It’s hard to score in these games. You’ve got to defend and rebound and take care of the ball and not give up easy ones, and that’s how you win these games. Lincoln and Boyle are doing that a little bit better, but our young guys are starting to learn how to do that.”

Danville (20-3, 6-0 45th District) scored the first nine points and 30 of the game’s first 40 points to win its eighth straight game and reach the 20-win mark for the third time in the past four seasons.

Four players scored in double figures for the Lady Admirals, who are 83-25 during that span and would likely have a string of four straight 20-win seasons if last season hadn’t been shortened due to COVID-19 concerns.

The Lady Admirals rattled Boyle (10-13, 1-6) right from the start to post its 10th consecutive victory in the crosstown rivalry. The Lady Rebels committed seven turnovers before they got off their first shot, and they had 18 turnovers in the first half and 27 in all.

Love Mays led Danville with 19 points, followed by Lara Akers with 17, Desiree Tandy with 16 and Jenna Akers with 10. Tandy also had nine rebounds.