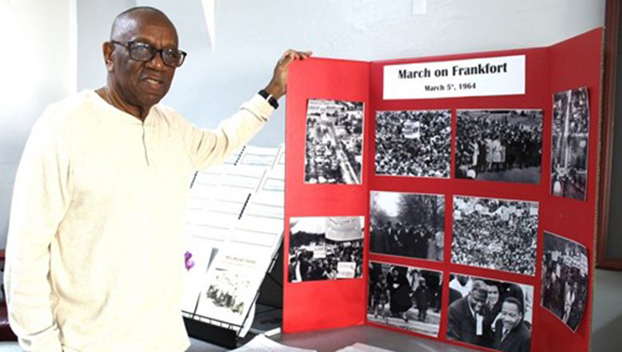 Michael Hughes has an incredible memory, recalling events in his life down to the day with ease. He’s always loved history, he said, and he is President of the Danville-Boyle County African American Historical Society. He’s also a graduate of Danville Schools.

He started school at Bate High School in 1955. At that time, it was a school for Black students. William Summers was principal at the time Hughes attended.

“Bate was like a family atmosphere, especially socially,” Hughes said. “And it was a great school, education-wise.”

When graduating classes from Bate met for reunions over the years, Hughes said it was always joyous, noting the smiles on people’s faces and that it was always a highlight of the year.

At the end of 1964, when integration started, Bate High School was discontinued, and Hughes started at Danville High School.

He was scheduled to graduate in 1966 and dropped out. He was out of school for almost a year when the assistant principal at the time got in touch with him and encouraged him to return to school. It was around that time Hughes decided he wanted to go back to school and graduate. He graduated from DHS in 1968.

“One thing that I remember is when I walked across the stage, I got a standing ovation from the class,” he said with a smile.

In school, Hughes was a self-described track star, earning the nickname “Meadowlark,” something many people still call him.

He sang in choir and was in a band called The Mystics. After graduating, he joined the Marine Corps and became a combat soldier during the Vietnam War. He served from Nov. 1, 1968 to March 10, 1970.

Hughes said the only interaction between DHS and Bate High School was through athletics, and when they did, Black students were subject to disadvantages like being required to start 2 feet behind white athletes in track events when Black and white students competed together.

There were a handful of Black students who attended DHS as far back as 1956, but most elementary through high school students attended Bate.

He noted that Black people were subject to back door service at restaurants, movie theaters limited seating for Black visitors and did not allow them to use the facilities’ bathrooms or the same ticket or concession stands as white visitors, they were denied service in barber shops and other establishments and Jim Crow laws were in place. Most jobs available to Black people were “menial,” as Hughes described.

It was during the 1964 March on Frankfort, when Martin Luther King, Jr. and other civil rights leaders led a peaceful rally with Hughes as one of thousands of attendees, that Hughes felt change in the air. It was a cold day in March, and students went to the rally on a school bus from Bate High School.

“That was the first time that I really felt like there was a change and that people were hungry for a change,” he said.

Hughes noted some of the things King said during the march, including “Morality can’t be legislated, but behavior can be regulated,” and “Law can’t change the hearts of men, but it can change the habits.”

On the way home from Frankfort, students sang “We Shall Overcome.” Hughes described a “feeling of euphoria” that swept through the crowd at the rally. In the schools, students knew integration was coming. Sure enough, later that year the Civil Rights Act of 1964 was signed into law.

“Even though the integration of the Danville Schools happened, the city didn’t integrate at that period,” Hughes said. “That was a lot slower movement.”

He said, “The kids were kind of put out there, testing the water.”

When King was assassinated in 1968, Hughes recalled that the lobby of DHS was flooded with people upset, crying and in disbelief. Some students “wanted to take to the streets,” but fellow students and teachers convinced them that violence would not be productive, and it went against King’s peaceful methods. He said the school came together and prayed and cried after the news. The school administration allowed students who wished to stay home on April 9, 1968 to remember King and watch his funeral on TV.

Now Hughes is President of the DBCAAHS, spearheading an effort to tell the story of Black people in the community. The history center, located on Second Street, has collected tons of photos, memorabilia from Bate High School and other areas, articles and writings chronicling the community’s Black history, including the Black business district that was on Second Street prior to the ‘70s.

Hughes said he loves being able to connect people. For example, he posted a photo online and a man reached out and said it was his father and that he had never seen a picture of his father. He thanked Hughes for sharing it, and the interaction meant a lot to Hughes.

He describes the work the DBCAAHS is doing as “something that caught fire” and that will last — the community will be telling stories about Danville and Boyle County’s Black history for generations, not just in small social circles but on a larger scale.