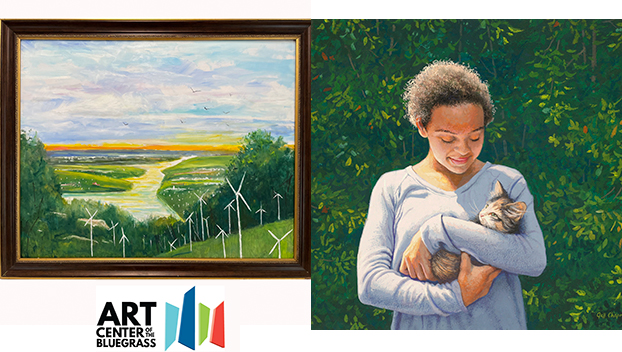 The Art Center of the Bluegrass is excited to announce the two prize winners for the exhibition Imagining the Future of Kentucky’s Appalachia, a regional artist call and one of three inter-related exhibits as part of the center’s winter show Appalachia From the Inside: Celebrating Kentucky’s Appalachian Art and Culture.

The exhibition includes two cash prize awards of $300 for first and $100 for second place. The two prize winners were selected this past week by the Art Center’s new Visual Arts Director, Jeffrey Nichols. Winners were judged on creativity, strength of execution, and overall concept related to the theme of the exhibition. According to Nichols, “this was a very difficult decision. There are so many great pieces in the show made by truly talented and gifted regional artists.” After much deliberation, Nichols selected two pieces that he believes exemplify the exhibition theme and its connection to the Appalachian culture and identity, specifically the importance of family, the land itself, and resourcefulness. 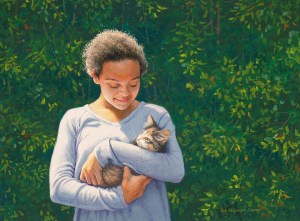 Nichols has selected artist Jeff Chapman Crane from Eolia, Kentucky, as the first-place prize winner of $300 for his gauche watercolor titled Kiki and Calli. Crane’s heartwarming piece depicting a young Appalachian girl lovingly holding a playful cat. “Crane has the ability to tell a profound and compelling story with each of the three pieces that he presented in this exhibition. His painting Kiki and Calli conveys optimism for the future of Appalachia that entices the viewer first with Crane’s mastery of the medium and then second by the story he allows the viewer to create. The piece reflects the rich ethnic heritage of Kentucky’s Appalachian people with African, European, and Native American roots.”

The second-place prize of $100 is awarded to Danville’s own David Farmer for his powerful and thought-provoking piece Power of the Wind. Farmer is highly regarded within the region for his charming and engaging landscape paintings. Power of the Wind is one of two works Farmer presented in the exhibition that demonstrates his ability to capture Kentucky’s topography while also interjecting social and political themes of sustainability for the Appalachian region. 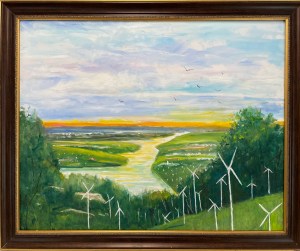 Power of the Wind by David Farmer

Coal has long been connected to the livelihood of many Kentuckians living in the eastern part of the state. With his painting Power of the Wind, artist David Farmer calls for change from coal to renewable energy sources to help fight off global warming and save Kentucky’s Appalachian culture, its land, and the livelihood of its proud and hard-working people.