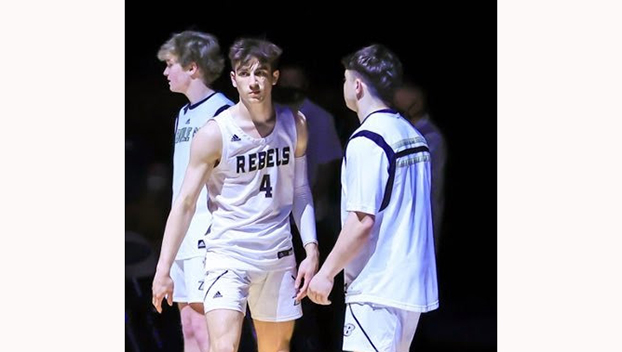 Senior Hagan Webb led the Rebels in scoring with 21 in their win over Wayne County.

The Boyle County boys basketball team is back on the right track after suffering through a tough 5-game stretch these last few weeks.

At the beginning of last week, the Rebels had dropped 4 games out of their last 5 and had doubters coming out of the woodwork, but after convincing wins over Danville, East Jessamine, and, last night, Wayne County, it looks like the Rebels are rolling in the right direction at the right time.

In last night’s game, Boyle came out hot and it was evident right from tip-off. The first spark came from seniors Luke Imfeld and Hagan Webb knocking down consecutive threes.

The Rebels ultimately drained 4 threes in the first quarter, three of which came from Webb, but Wayne was hanging around due to a few three-pointers of their own.

Boyle showed their might on the other end of the floor in the 2nd quarter, holding Wayne to just 9 points.

Boyle used their momentum and compounded on the lead in the third, but the Cardinals were able to claw their way back into the game, cutting what seemed to be an insurmountable lead down to 9 inside the fourth quarter.

The effort was too little, too late with Boyle County walking out of Rebel Arena with a 63-52 victory.

Although it quickly seemed like the Rebels had the game in hand, Wayne did enough to keep them uncomfortable and on-edge from start to finish.

Hagan Webb had a career-high 21 and contributed 5 of his team’s 10 three-point baskets.  “After that first one went down, I was just feeling it and it seemed the rest of the team had that feeling too.”

Just a week away from postseason play, the Rebels are looking to make another run at both the 45th district and 12th region championships.

“It’s gonna be challenging, but I’m looking forward to it. I think we can make a strong push and prove a lot of people wrong,” said Webb. “I can’t wait to see what we can do!”

Boyle will face 45th district foe Danville Christian Academy on Tuesday night in the last home game of the season for the Rebels.