A zone change request for a proposed subdivision in north Danville between Candlewood and Colonial Heights subdivisions was recently presented to the planning and zoning commission and the city commission. Neighbors spoke out against the zone change in a recent planning meeting.

The current R1A classification would allow approximately 91 homes in the subdivision. The zone change would increase that number to 121 homes.

The subdivisions on both sides of the property are R1A zones. Residents of the Colonial Heights subdivision said they believe a subdivision with smaller lot sizes would not be compatible with the existing neighborhoods.

Colonial Heights resident Jacob Webb said in the planning meeting that not everyone in Colonial Heights received a letter about the zone change, only those attached to the property. He believes neighbors should have been more informed since the project affects the entire subdivision. He said they have collected a petition of 126 signatures opposing the zone change.

“The property density we specifically have in our property, you can see in Colonial Heights the space we have per home, the addition of having more houses on less space and attaching that to our existing subdivision,” Webb explained they need more information than the mostly blank map presented at the meeting. 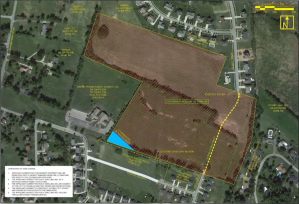 Map of the zone change presented at the planning meeting

Attorney Stephen Dexter, who is also the Danville city attorney, represented Sharpe during the planning meeting. Dexter said the property has been zoned for residential use since 1971. He said the sole purpose of this zone change isthe variation in lot width from 70 to 50 feet.

“With the modification of class that we are requesting, we go to probably 121 lots, which is not far off from what would be allowed at this very moment with the submission of a minor platform approval,” Dexter said. “While this is technically a zoning map amendment, in reality, it’s a slight modification.”

The development could move forward with the subdivision being R1A classification. However, Dexter said the addition of more homes would meet a major housing need for the Danville and Boyle County communities.

One resident said in the planning meeting that she had been looking for a house in Danville for over a year before finding one in Colonial Heights.

She wanted a house with a larger yard. She said that while more housing is a big need, people move to cities like Danville to have a yard, and believes Danville should not compromise lot size to fit more houses in a space.

Dexter said the developer has agreed that homes will be in the $190,000 to $300,000 range. House density is limited to one to five dwellings per acre, and houses will be detached single-family homes.

Residents were also concerned about the absence of a traffic study before a zone change approval. The city had deferred a traffic study until the construction plan phase.

Another Colonial Heights resident said he is worried about his grandchildren’s safety playing outside, with the addition of more cars on the road. He said the proposed connector street, which is mostly straight, might allow speeding on the road.

Dexter said that construction plans would be developed in accordance with the traffic study, whether or not the study is done before approval of the zone change.

“The general development plan that was submitted is more than sufficient, and is in concert with the development plans that this planning commission has received for decades,” Dexter said. “The narrative that is provided in the application more than meets the definition, it’s to give a general idea of what’s to transpire on that property.”

The planning commission made its recommendation to the city commission for approval of the zone change.

At the city commission meeting on Monday, City Attorney Dexter recused himself from the meeting during discussion of this zone change since he represented the developer. Attorney Bryan Beauman took his place to present the zoning request.

However, one citizen believes Dexter could still influence the outcome of the zone change since he works with the decision-makers.

Resident of Colonial Heights Anne Claire Compton said in a letter to The Advocate-Messenger, “I find it difficult to believe that Colonial Heights is going to get a ‘fair shake’ in regards to this issue when the city attorney, who works alongside the decision-makers on this issue, is representing the developer. The city did appoint special counsel for this particular case, which is also concerning from a tax dollar perspective.”

She continued, “I am also concerned about who found special counsel and if Dexter was involved in that process. I am assuming Dexter is continuing to receive his salary from the city while the city is additionally paying for, with tax dollars, to hire another attorney for this case, which would theoretically allow Dexter to ‘double dip’ if you will.”

City Manager Earl Coffey told The Advocate-Messenger that Dexter is not an employee of the city of Danville. He said counsel for the city is billed hourly as services are needed.

“The firm most often used in partnership with the city on legal matters not undertaken by Attorney Dexter is the firm of Sturgill, Turner, Barker & Moloney located in Lexington,” Coffey said. “Attorney Dexter played no part in my decision to reach out to this firm after I was made aware of the conflict as identified by Dexter. Their in-house recommendation was Bryan Beauman, who we have used previously with conflicts such as this.”

The city commission requested that Beauman draft an ordinance for the zone change. They will have a meeting specifically about the zone change on Monday, Feb. 21. The commission will hear the public at that meeting.