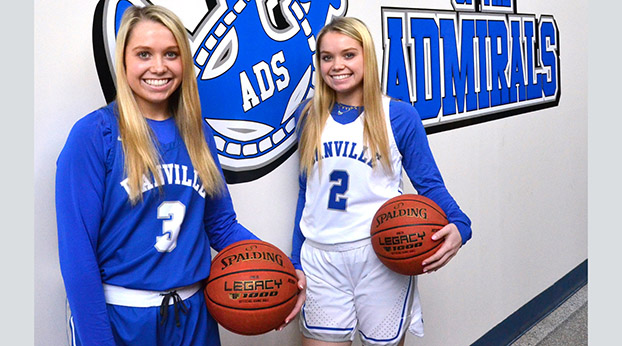 Jenna (3) and Lara Akers (2) are getting one more shot at helping their team reach the state tournament. - Photo by Mike Marsee 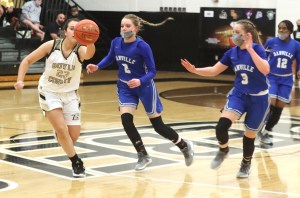 Danville’s Lara Akers (2) and Jenna Akers (3) are ready to help their team try to win a district and regional championship and hopefully reach the sate tournament. The twins returned to Danville for a fifth year this season. – Photo by Mike Marsee

Jenna and Lara Akers have already played their last game.

They’re not done, not by a long shot. The twin sisters will figure prominently in the Danville girls’ pursuit of district and regional titles over the next two weeks.

They didn’t know they would have that chance last March when they sat on the bench in the closing seconds of a regional tournament loss that appeared to mark the end of their high school basketball careers.

But here they are again, back for one more postseason run and driven by the disappointment they felt when their first senior season ended.

“With the feeling of that last game, we just know that we have unfinished business, and we came back to be a part of it,” Jenna Akers said.

When Danville begins play in the 45th District Tournament next week, the Akers sisters will begin writing one of the final chapters of their shared experience as multi-sport standouts. But the story isn’t only about them.

Lara and Jenna Akers took advantage of a unique opportunity for a fifth year of high school athletics in part to better themselves but also to help their friends and teammates take one more shot at getting to the Girls Sweet 16.

“A lot of people just thought they wanted to come back to benefit themselves, but it’s also for their friends,” Danville coach Judie Mason said.

“They’re really good friends with this senior class, so I think just growing up with them and knowing they missed out on an opportunity … they wanted to come back for that.”

The Akers have won regional championships in tennis and have had success in soccer, but basketball is the game in which they have invested the most time and energy.

They thought that time had come to an end on that night late last March, when Danville lost in the 12th Region Tournament semifinals and the two girls experienced the same feelings shared by so many athletes who thought they could take their team just a little bit farther before it all came to an end.

Then they got a do-over.

The passage of Senate Bill 128, which was signed into law two days before the Lady Admirals’ season ended last year, allowed students whose 2020-21 academic year was disrupted by the COVID-19 pandemic a supplemental school year and also allowed high school student-athletes a fifth year of athletic eligibility.

SB 128 was not drafted with athletics in mind, but the sisters, both of whom are straight-A students, acknowledged that basketball was one of the biggest reasons why they decided to return to Danville.

“It was probably primarily basketball,” Jenna said. “There were social aspects, and also we’re able to take more BCTC classes so we can get some college credits.”

Danville has a 101-39 record in the Akers’ five years of playing varsity, but the Lady Admirals haven’t made it past the regional semifinals.

Danville is 24-3 this season, and the Lady Admirals will take a 12-game winning streak and the No. 1 spot among 12th Region teams in the KHSAA’s RPI ratings into its regular-season finale Friday at South Laurel. They also will be seeded No. 1 for the district tournament on their home court.

And they will be led by two players who know what it feels like when it all comes to an abrupt end.

“They have that taste, and they know how it feels to think this is the last game I’ll ever play,” Mason said. “A lot of times the end’s the end, and it wasn’t the finale for them. I think they understand that, and they really cherish every game now.”

The two girls are among four 1,000-point scorers in the Lady Admirals’ lineup and have a long list of accomplishments in the sport, but they said the memories they will take away have more to do with camaraderie than achievement.

“Probably the best memories are just the atmosphere of the team, the coaches and just how well we all get along,” Lara said. “It’s like one big family.”

Lara said the chance to spend another season with that family was a big reason why they chose to repeat their senior year.

“The atmosphere of our team is a great thing to be a part of,” she said.

They also are enjoying one more chance to do the things they couldn’t do last year when COVID protocols were more restrictive, from basketball-related activities such as summer ball and team lock-ins and scouting trips — as well as playing without wearing masks as they did for most of last season — to typical teenager activities like proms and football games and and just being able to hang out with their friends at school.

“All my kids were virtual last year, so they didn’t even get to walk the hallways,” Mason said. “They didn’t get to have a homecoming dance. We didn’t get any of that, and that’s big for these girls because they are involved in everything.”

That includes four sports during their high school years. They have won the last three 12th Region girls doubles tennis championships, they were among the top scorers on the girls soccer team in 2020 (though they played only a few games last season) and they have served as managers for the baseball team.

They were competitive swimmers into their middle school years, and there aren’t many sports Danville offers that they haven’t tried.

“Two we haven’t tried are softball and volleyball. I always wondered if we’d be good at them,” Jenna said.

The girls said they’re firm believers in the value of participating in multiple sports.

“I’d say that all of the sports that we have ever played, they all help you in the long run,” Jenna said. “It always helps you, just being in great condition for the next season that comes into play.”

“And just being involved in different teams, they’re different environments, but they’re all fun to be part of.”

While the two girls are alike in many ways, they bring their own distinct personalities to their teams.

“She’s always pushing everybody to better themselves,” Jenna, the oldest twin by one minute, said of Lara. “She’s a very great offensive player and great defensively. She’s very supportive of her teammates and just loves the game of basketball.”

Mason likens each of them to one of their parents: father Hal, who played basketball, and mother Leann, who participated in track and field and cheerleading.

The twins also followed in the footsteps of older sister Haley, who was involved in swimming, cross country and tennis in high school and with whom they participated in swimming and cheerleading as youngsters.

Swimming was the twins’ first sport — they swam their first competitive race at age 3 — and they first played basketball at age 8 when they were picked for a rec league team that needed two girls to complete its roster.

They took up hoops in earnest as sixth-graders after transferring from Danville Christian Academy to Danville’s John W. Bate Middle School. That’s where Mason, who takes an active role in the middle school program, first saw them play.

“She would come to our games, and that’s when I shot like this,” Jenna said, making a motion similar to a breaststroke swimmer. “I would hit the side of the backboard and keep on shooting because I didn’t know any better, and of course she would be there to yell at us.”
“She would always sit in the corner in her own little chair, and she came to the locker room and I remember her making me cry one time,” Lara said, adding that she doesn’t remember what Mason said.

Mason left the Danville program in 2015 but returned in 2018, when the Akers sisters were sophomores, and their admiration and affection for her has grown considerably since that sixth-grade experience.

“She’s a lot more than just basketball,” Jenna said. “She wants us to be able to do things in the real world.”

The real world is fast approaching for the two girls, who are thinking about colleges and careers. Jenna is considering a career in dentistry or nursing, Lara is also considering something in the field of health care and both of them are expected to have a year’s worth of college credits under their belt before they leave Danville.

Both girls will have the opportunity to play basketball at the next level as well. Lara, who played for the Kentucky All-Stars last year, received a Division I offer from Murray State a few weeks ago, and each of them have offers from a number of schools at lower levels.

They said they like the possibility of continuing to play together in college, but neither will make any decisions until after their high school season is done, and both said academics will be just as important as basketball in their selection process.
“We’re not thinking about that right now,” Lara said. “We’re thinking about finishing out the season.”

No matter how this season finishes, they will have no regrets about their decision to spend one more year in high school.

“Some people wanted to say, ‘Why are you putting your life on hold?’” Mason said. “They didn’t put their life on hold. They’re living the best life they can right now.”