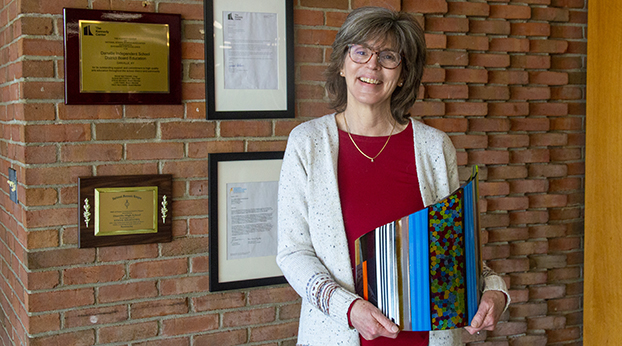 Jane Dewey, director of arts education for the Danville school district, has received the 2021 Governor’s Award in arts education.

Jane Dewey, director of arts education for the Danville school district, has received the 2021 Governor’s Award in arts education.

The Governor’s Awards in the Arts consists of nine categories that celebrate Kentucky citizens’ and organizations’ contributions to the state’s arts heritage. It is the state’s most prestigious arts award.

Dewey has been in arts education for 27 years, the last 22 with the Danville school district. While administering arts education at all schools in the district, she also teaches some theater classes and regularly interacts with students.

“It really is an unbelievable recognition of the work I’ve done over the years,” Dewey said. “I’m being honored amongst people who I have admired and respected, some of whom have mentored me for years, so on that side it just feels really good.”

The arts have been a part of Dewey’s life since she was in school herself. Out of school, she became a freelance theater artist for 16 years, doing acting, directing, and producing. She then taught theater at the School for Creative and Performing Arts (SCAPA) in Lexington for four years.

After administering arts education in Richmond for nine school districts, she came to the Danville Schools to help utilize their newly-renovated theater space for students. Dewey said that during the last school year before COVID-19, they had about 30,000 people in and out of the theater.

“I work with some of the best visual and performing arts teachers in the state, in the region, probably in the country, right here in the Danville Schools,” Dewey said.

Dewey was nominated for the award by colleagues across the state. Philip Shepherd is one who nominated her; he hired her for the position at SCAPA in the 1990s.

“I think she’s done such outstanding work for so many years, and I felt that it would be nice to recognize all that work she’s done,” Shepherd said. “She has this tremendous dedication, and it’s unending. She seems to have energy that never stops, no matter how busy she gets, she’s just one of those incredible people that continues to give everything she has to arts education.”

Shepherd also worked at the Department of Education from 2001 to 2009, and worked with her when they needed advice and assistance from the education field. He said Dewey was part of an arts advisory group and assessment committee.

“We needed that voice from across the state and Jane was always one of the people who was actively involved in those different kinds of committees,” he said.

Dewey is the facilitator of the Kentucky Coalition for Arts Education, which is made up of all professional arts education organizations in the state, including music educators, art educators, dance, theater, etc. She also serves on the boards of Kentuckians for the Arts and the Art Center of the Bluegrass; and is a Kentucky Peer Advisory Network consultant for the Kentucky Arts Council.

“The world would be a lot better place if we could somehow clone Jane and share her around everywhere; she’s just an amazing person,” Shepherd said.

Dewey said the award helps shine a light on how important arts education is to every student. A study by Americans for the Arts found that one of the top three most valued skills by employers and business leaders is creativity.

The study found that 72% of employers say creativity is of primary concern when hiring. In a survey of college-educated, full-time employees ages 25 and up, 85% agreed that creative thinking is critical for problem-solving in their career. Dewey firmly believes the arts are essential to a good education.

“There’s lots of data about the value of arts education, but it isn’t easy to quantify,” Dewey said. “We can’t broadcast our art scores the way we do our ACT scores, but the value in it is what you see students create, the understanding they bring to the work, their increased knowledge of themselves and their increased understanding and empathetic response to others.”

She has seen art make a difference in students’ lives, from the smallest difference like being able to have a creative outlet they love, to students who have had huge success in the arts.

Dewey said she recently spoke in a state-wide committee about a bill that would require schools to have students take an art class every year. She took three students to the meeting, and one of them gave testimony as to how the arts changed her life.

In middle school, that student had a hard time fitting in. When a teacher suggested she try theater and speech, she overcame a stutter, won awards in speech, won scholarships for her acting abilities, and became the first person in her family to go to college.

Both of Dewey’s own kids graduated from the Danville Schools, and one of them, who’s 28, works in arts education. The other, now 22, is graduating from Centre College.

Dewey is currently working on a project for Bates Middle School that would pair their English Literature class with a class in theater education at Centre. She said it would allow students to understand literature by seeing it instead of taking a test about it. She is always looking for new ways to integrate the arts in education.