Danville and DCA go to overtime in district opener 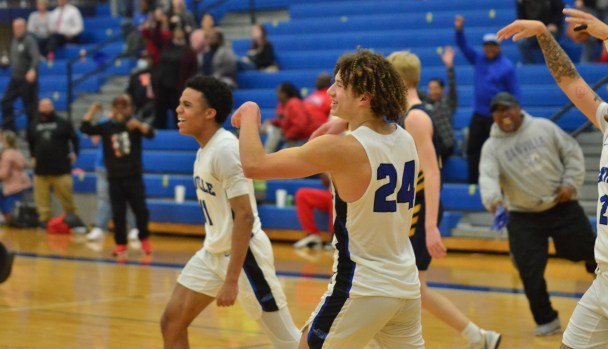 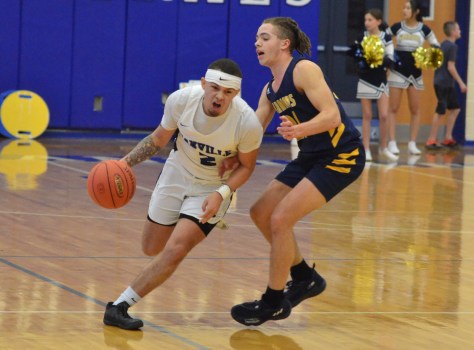 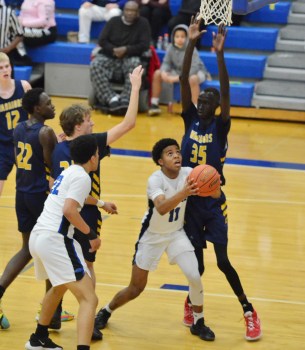 Jalen Dunn (11) of Danville looks for a shot against Danville Christian defender Lual Ayiei during the third quarter Monday. - Photo by Mike Marsee

First, the Danville boys shortened the game. Then they seized it.

The Admirals aren’t known for being patient on offense, but they made it work for them Monday night in the first round of the 45th District Tournament at Danville.

An unintentionally deliberate approach allowed them to extend the game and ultimately extend their season with a 60-53 victory over Danville Christian.

Danville wasn’t trying to take the air out of the ball but was simply looking for good shots against a team that didn’t want to give them up.

“We played the game right,” Danville guard Jarius Bryant said. “We’re not used to doing that. It worked out for us, though.”

The victory sent Danville (16-14) on to the semifinals. The Admirals, seeded fourth in the five-team field, will play No. 1 seed Boyle County at 6 p.m. Wednesday.

Danville held the ball for almost three minutes at the end of regulation, not to run time off the clock but to try to find the shot it wanted.

“I was proud of our guys,” Danville coach Ed McKinney said. “We want to win, and our guys did what they had to do to win the game.”

Patience got the Admirals into overtime, and good free throw shooting gave them the upper hand in the extra period as they won their fourth straight game. They went 7 for 9 at the foul line in overtime, when they outscored DCA 9-2 over the final 1:07.

DCA (18-12) had beaten Danville in two of three games during the regular season, but the Admirals won the one that mattered most by avoiding the Warriors’ shot-blockers on the inside and handling — at least for the most part — their ball pressure on the outside down the stretch.

Danville was in no hurry to shoot after DCA’s Titus Boyd scored with 2:59 remaining in the fourth quarter to tie the game at 46-all.

The Admirals turned it over with about 1:30 left but got the ball back by rebounding a missed layup on the other end, and they nearly lost it again on a deflection, but the ball rolled out of bounds at :17.

“We had a few chances there and couldn’t quite get our hands on it,” DCA coach Don Story said. “It seemed like we fumbled the ball a lot tonight.”

Bryant, who scored a game-high 23 points, missed a 3-point shot just ahead of the buzzer.

Dante Hayden gave Danville a 49-48 lead with a 3 in the first minute of overtime. DCA tied the game at 49 and 51 but got only one more basket, and the Admirals hit seven of eight free throws down the stretch.

Bryant, who scored 13 points in the fourth and fifth periods to finish one short of his career high, went 5 for 6 at the line in overtime and 11 for 14 overall. He credited Hayden with improving his percentage by suggesting a change to his pre-shot routine.

“Dante helped on that. Instead of dribbling the ball on free throws, I just catch it and shoot,” Bryant said.

There were seven ties and eight lead changes in the lowest-scoring of the four games between the teams. DCA led 32-25 early in the second half, but Danville drew even by the end of the third quarter.

Jalen Dunn and Demauriah Brown had nine points each and Hayden had eight for Danville, and Dunn had a game-high 12 rebounds.

Lual Ayiei had 15 points and 10 rebounds for DCA. Boyd scored 14 points and Xavier Yamo had 12 for the Warriors, who had never beaten Danville — or any district opponent other than Kentucky School for the Deaf — in the three previous seasons since they joined the KHSAA.

DCA celebrated several milestones this season, from a school-record 11-game winning streak to winning the 12th Region All “A” Classic for the first time to getting its first two wins in district play, and Story said the program has progressed to a level where firsts shouldn’t matter as much in the future.

“We’re getting to a point, I hope, now where we’re just competing like anybody else,” he said. “We’re in it to go as far as we can. Most teams in the 12th Region, their goal is to make it to the state, and that’s our biggest goal right now. I guess you’ve got to make region first, but that’s our ultimate goal, to get to the state tournament.”

The immediate goal for Danville is to match up with a Boyle team that defeated the Admirals 72-44 at Danville and 48-36 at Boyle.

“Out there we had a little more fight in us,” McKinney said. “But we’ve got to play a great game and they’ve got to be off a little bit.

“We’ve got our hands full, we know that. But we’re still here, we’re in the district on our home floor, and in 32 minutes anything can happen.”